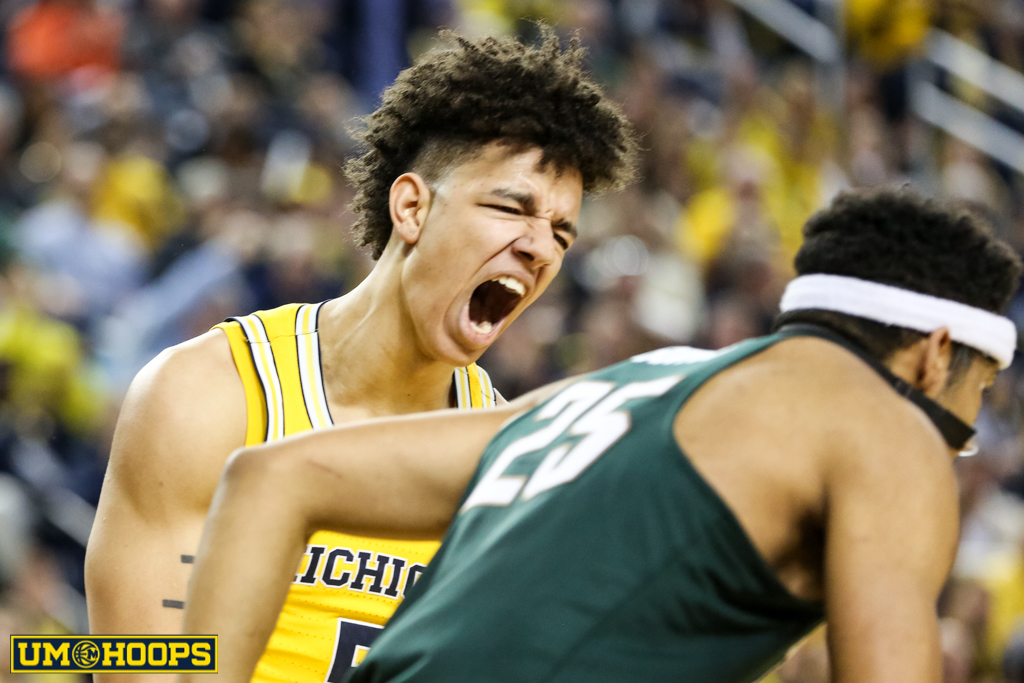 DJ Wilson’s long-winding path from obscurity to stardom concluded Thursday night when the Milwaukee Bucks selected him with the No. 17 overall pick of the 2017 NBA Draft.

DJ Wilson’s long-winding path from obscurity to stardom concluded Thursday night when the Milwaukee Bucks selected him with the No. 17 overall pick of the 2017 NBA Draft.

Not many could have predicted this outcome before this past year. Yet there was Wilson’s name, flashing across the screen behind Adam Silver as he became Michigan’s sixth first-round draft pick in the John Beilein era.

Wilson, an early entrant, was commonly projected as a late first-rounder throughout the spring — that is, until the final days leading up to the draft, when he rocketed up draft boards from the back end of the opening round.

It just so happens that late jump perfectly encapsulates the final season of Wilson’s three-year collegiate career, a season in which he improved by leaps and bound and completed a meteoric rise from the depths of the bench.

Unlike the previous five Wolverines who went in the first round, Wilson failed to experience even a glimmer of immediate success upon his arrival in Ann Arbor. In his first two seasons at Michigan, he played in just 31 combined games, averaging paltry minutes off the bench. His freshman season ended in perhaps the most humbling fashion — Wilson injured his knee when Villanova’s Dylan Ennis blocked a dunk attempt, leading to an eventual redshirt. The next year did not go much better. Wilson found his minutes reduced as the season progressed, playing a total of just 15 minutes over the final 12 games.

A transfer loomed on the horizon. After all, three of his classmates — all of whom had played more than Wilson himself — decided to leave in the offseason.

But Wilson stuck it out, and he was amply rewarded for his patience and decision. As one of the key cogs of a Sweet Sixteen team, Wilson enjoyed a breakout redshirt sophomore season. Combining an effective three-point shot, a burgeoning offensive game and newfound defensive abilities, Wilson emerged from anonymity as soon as the season began.

On the season, Wilson averaged 11.0 points, 5.3 rebounds and 1.5 blocks per game for the Wolverines. He utilized his length and athleticism to become a problem on the glass and in the paint to become the player that many hoped he would be — a player that fit perfectly into Beilein’s system as a stretch ‘4’ and will have ample opportunities in the NBA, a league that has moved overwhelmingly to a style of play that fits Wilson’s skill-set.

This past March, Wilson candidly revealed while on The Dak and Dunc Show that he did indeed consider transferring following the 2015-16 season. He even told a story of how he skipped a scheduled meeting with Beilein — during which they were supposed to discuss his immediate future — before flying home to California for the summer.

“Those first couple years, adversity really hit me. I didn’t know what to expect, but I had to stay patient and trust the process,” Wilson said on the podcast. “How close was I to transferring? It crossed my mind from time to time, especially toward the end of the year when in nine games I played eight minutes. I played a minute in the Big Ten Tournament, but then I didn’t play in the NCAA Tournament.

“But the thing is, I didn’t want to sit out another year. I sat out my first two years. I wanted to play. I believed in myself, I had the utmost confidence and here I am today.”

So Wilson stayed. He became a champion, playing 132 minutes in four games at the Big Ten Tournament as Michigan won four games in as many days, and now — though it may have taken longer than he initially expected — he’s headed to the next level.

“Here’s what we try to predict in recruiting: Who has maximized and is where they should be, and who is still growing?,” Beilein said during a radio appearance Tuesday. “During times in the year, there were no questions in my mind (Wilson) could be a pro. … He’s just on his way to being a really good player. He can really shoot. Put it together with his defense … he’s 21 with a body of a 19-year-old.

“The best is yet to come for him. He’s a super kid on and off the court; very coachable. Whoever gets him is going to be very fortunate.”