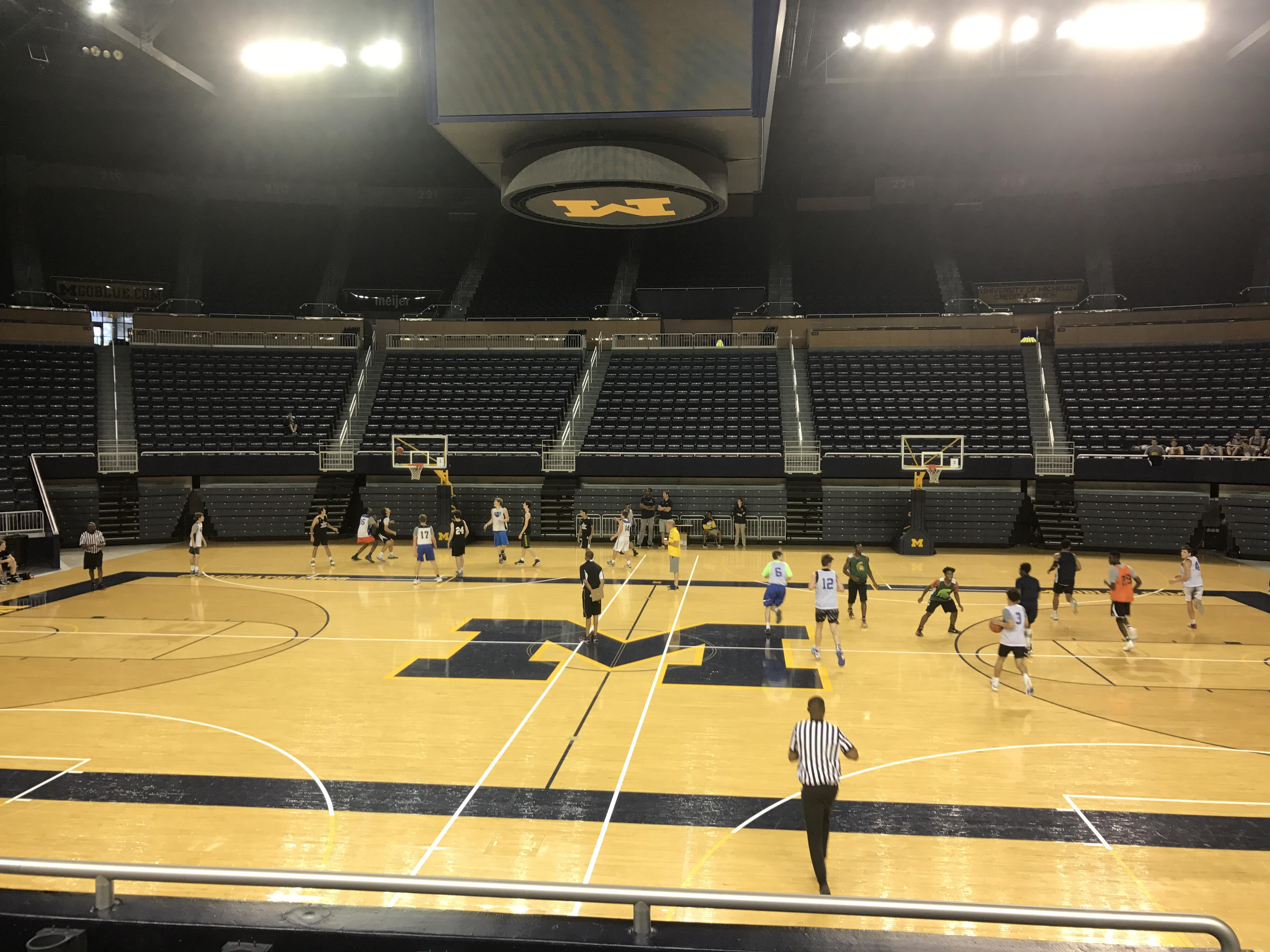 Michigan hosted its College Practice Camp and Team Camps this weekend in Ann Arbor, here are some notes from the weekend thus far.

The best player at Michigan’s College Practice Camp on Friday afternoon was four-star forward Brandon Johns. He wasn’t just the most talented player in attendance, he played like it as well. Johns has really come into his own over the last year and his combination of size and skill is impressive. He handled the ball on the perimeter, attacked the paint and finished through contact at camp on Friday.

Souleymane Koureissi (2018) was a notable out of state visitor for the camp. He’s a lengthy forward prospect who clearly has some potential, but is still a bit rough around the edges. He looks like a mid-major plus prospect right now, but he’s one that the Wolverines will continue to track.

Williamston’s Sean Cobb (2019) was in attendance along with a promising 2018 wing, Walter Ellis, who is the son of former NBA star LaPhonso Ellis. Ellis can really score the ball and had some nice moments in . Class of 2020 forward Carlos Johnson (2020, Benton Harbor) was in the building for both camp events and the 6-foot-6 sophomore built more like a senior with his impressive frame.

Class of 2019 guard Harlond Beverly was one of the best players at both camps and played like one of the better prospects in the 2019 class.

He has high-major interest from Michigan, Michigan State, Iowa, Northwestern, Ohio State, Temple, VCU and Wisconsin among many others. The wolverines were in contact with Beverly since the June 15th contact date passed and it will be interesting to watch how the recruitment progresses after his big camp performances this weekend.

Beverly is a smooth guard who has the athleticism at 6-foot-2 to finish above the rim — he threw down several poster dunks throughout the weekend — and also plays with great composure.

“We’re trying to get to know each other,” Beverly said of Michigan. “They’ve had a winning tradition since I’ve been watching. That stands out.”

Nance and DeJulius went head-to-head in an afternoon game at the IM Building, a matchup that DeJulius and East English got the best of with a 20 point win. DeJulius had 12 points and 6 assists in the 59-39 win, while Nance had 5 points, 5 rebounds, 4 blocks and three assists in the head-to-head matchup.

Nance had a more impressive scoring effort in his other two games, reaching double digit points and easily a half dozen blocks in wins over L’Anse Creuse North and Belleville. John Beilein was courtside at every game that Nance played.

Some other notables in attendance included Marcus Bingham Jr. (GRCC, 2018), Harlond Beverly (SCS, 2019), Drew Peterson (Libertyville, 2018) and a host of others. We’ll have full evaluations from both camps in this week’s recruiting roundup. Find some additional tidbits from Saturday’s action on our subscriber forum.

Billy Donlon wasn’t at either of Michigan’s camps and all signs point toward him being on the Northwestern bench next season, including this report by the News Sentinel.

Michigan could find itself having lost two assistant coaches in a week after being caught in the domino effect of Chris Holtman being hired at Ohio State and then LaVall Jordan to Butler. Donlon’s connections to Northwestern are strong — his high school coach is on staff, his dad lives in Chicago and used to coach there, and he’s a long time friend with Chris Collins — but the move would leave the Wolverines in a very difficult spot considering how many recruiting visits are on the schedule and the July live evaluation period is around the corner.