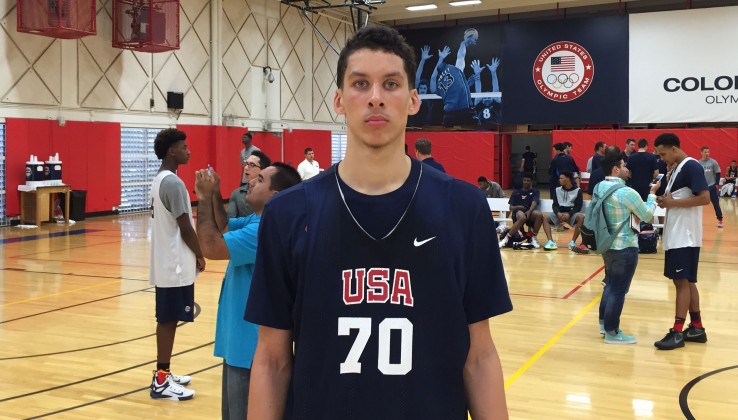 Johns was measured at 6-foot-8 (with shoes), 215 pounds with a 6-foot-10.5 inch wingspan at a USA Basketball event last summer. He averaged 20.6 points, 10.5 rebounds and 3.2 blocks for East Lansing last season and was named Class A Player of the Year in Michigan.

He has played 17U Nike EYBL the last two years and made major improvements to his numbers this spring. He’s averaging 11.8 points and 6.5 rebounds per game for the Spiece Indy Heat while shooting 55% on twos and 47% on threes. Last summer, he averaged just 6.6 points and 3.1 rebounds per game.

Johns is a consensus top-100 prospect and chose Michigan over offers from Michigan State, Indiana, Purdue, Missouri, Cal, Iowa, Pittsburgh and others. He was also the first player that Michigan offered in the class of 2018.

At 54th overall in the 247 Sports Composite, Johns is the highest rated player to commit to Michigan since Kameron Chatman in the 2014 class.

Brandon Johns is a stretch four-man with the versatility to play as a wing. He can work inside with his back to the basket against smaller defenders or face-up and drive against bigger opponents. He’s also a very reliable three-point shooter off of the catch and an improving rebounder. His motor was questioned at times earlier in his career, but he’s done a great job of erasing some of those concerns now that he’s playing against kids his own age.

Here’s a look at his shot chart from this spring on the Nike EYBL circuit, provided by Krossover, he does a great job of picking his spots with the three or attacking the rim.

Of note here is that he’s not just a skilled shooter, he finishes consistently and reliably around the basket. He has had several poster dunks this spring in EYBL action and consistently finishes through contact. He’s also been far more aggressive taking defenders off the dribble this year compared to year’s past.

Brandon Johns has been almost scouted to death at this point after playing two years of Nike EYBL 17U and being highly touted at a young age. The knocks on Johns were always about his motor and production, but suddenly he’s turning a lot of that early potential into consistent productivity. At 6-foot-8 with long arms, Johns has improved as a rebounder and is more aggressive looking for his offense. He’s capable of stretching the floor and driving to the rim and looks like the total package as a stretch four.

Johns backed up his improved numbers on the Nike EYBL circuit with a very impressive afternoon at Michigan’s College Practice Camp and reminded everyone why he’s been on Michigan’s recruiting board for so long.

Johns was steady and solid all week. Only committed two turnovers and didn’t go hunting 3-point shots even though he showed in EYBL he’s quite capable from that distance. Rebounded it well, again showing he can play the four spot. Needs to get better defensively, but that should come down the road.

“I think the most important thing is he rebounded better than I’ve ever seen him rebound before and he was more aggressive off the bounce,” Scout recruiting analyst Brian Snow said. “He’s always kind of been a kid that’s athletic, but he always seemed to prefer to just shoot 3s. This year he’s been more assertive off the bounce, finishing through contact and been rebounding better. Whenever you diversify your game, of course that’s going to make colleges take a longer look at you. More schools are definitely doing that.”

Johns fits perfectly at the four spot in Michigan’s offense, where his size, shooting and skill will translate perfectly. You have to believe that watching DJ Wilson’s name come across the screen last week at No. 17 in the NBA Draft might have just been icing on the cake in his recruitment. If you are 6-foot-8, can shoot threes, rebound and finish at the rim then Michigan’s offense is going to provide all of the looks that you need.

Saddi Washington was hired on May 4th, 2016. Since then, Michigan has landed in-state commitments from David DeJulius, Isaiah Livers, Taylor Currie and now Brandon Johns. Prior to this recent run of in-state commits, Michigan had only signed 2 in-state prospects between the 2012 through 2016 classes (Derrick Walton and Austin Davis).

Indiana and Purdue had made a recent surge for Johns, but Michigan locking him up before the July evaluation period gives the Wolverines a jumpstart of momentum heading into the thick of the summer. The Wolverines are also supposed to host Pete Nance (July 1st) and Hunter Tyson (June 30th) for critical visits this week.

Michigan’s recruiting board for the 2018 class is loaded with combination forwards and versatile wings, but I wouldn’t expect Johns’ commitment to have any sort of immediate impact on other Michigan targets. There are multiple spots in this class and most targets are dynamic wings that can play various positions (especially the four) which needs to be the focus in this class.

Instead of worrying about who is more of a four and who is more of a three, expect Michigan’s pitch to focus on the versatility of both positions in the offense and securing the first targets on the board. The Johns commitment could also give the Wolverine staff some leverage to apply a little extra pressure to commit on some of the top targets.