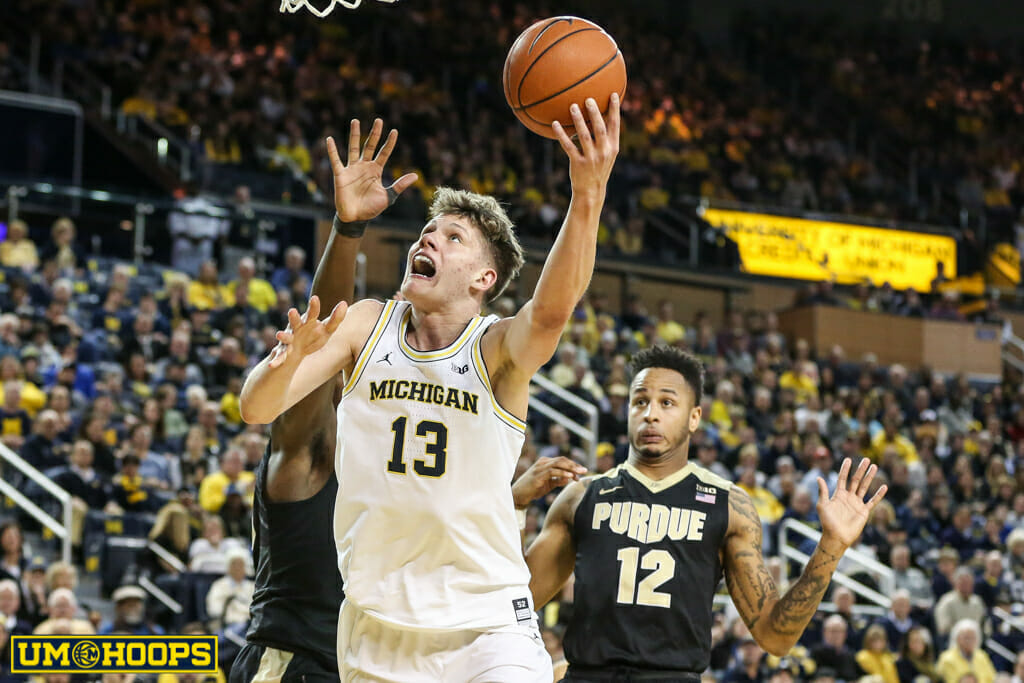 The last 24 hours have been filled with Michigan basketball news. Three Wolverine targets picked Indiana, the non-conference schedule and Big Ten single plays were announced, and news surfaced that Andrew Dakich is transferring to Ohio State.

Here’s a rapid reaction to all of the news of the last 48 hours. If you have more questions, ask a question in this month’s Patreon ask me anything (which starts at 10 a.m.).

The last 24 hours have been filled with Michigan basketball news. Three Wolverine targets picked Indiana, the non-conference schedule and Big Ten single plays were announced, and news surfaced that Andrew Dakich is transferring to Ohio State.

Here’s a rapid reaction to all of the news of the last 48 hours. If you have more questions, ask a question in this month’s Patreon ask me anything (which starts at 10 a.m.).

Logistically, this might have been one of the most difficult non-conference schedules that John Beilein has had to plan during his time in Ann Arbor. Not only do the Wolverines have to travel to Maui for three games in three days, but they also have to fit in a pair of Big Ten games in early December. Add in final exams in late December and the 2nd leg of two home-and-homes and John Beilein had his work cut out for him.

Earlier this spring, Beilein had discussed only playing 12 non-conference games, but he did schedule the full allotment of 13.

The result? A handful of games that are at the right time and the right place, but are against teams that aren’t very good. Michigan will host (last year’s KenPom rank in parentheses) North Florida (255), Central Michigan (229), Southern Miss (325), UC Riverside (311), Alabama A&M (351) and Jacksonville (275).

Yes — those games will hurt Michigan’s RPI, but they are also teams that could come to the Crisler Center three days before Christmas, the Sunday after the Maui Invitational, or the Thursday before it for $95,000.

Could Michigan’s end-of-season RPI be marginally better if it scheduled a few mid-major teams that were slightly better? Without a doubt, but Michigan’s non-conference schedules are designed around the high profile games and preparing for them. If you want to play in high profile exempt tournaments and schedule home-and-homes with high-major teams (how many schools are still doing this?), the rest of the schedule doesn’t leave you nearly as much flexibility.

Michigan should play 6 games against high-major opponents in non-conference play, with two on the road and three at neutral sites. If the Wolverines can figure out how to win a few of them, then the resume should be just fine in the end.

Judging by John Beilein’s tenure in Ann Arbor, the scheduling approach hasn’t hurt in the end. The narrative surrounding Michigan’s postseason resume has generally focused on a few notable non-conference wins rather than anything else and I can’t think of a year where the Wolverines have missed the tournament and should have made it.

The Maui Invitational bracket is expected to be unveiled later this morning, but overall the field seems to be a little weaker than some recent groups.

The keys in the bracket draw are to avoid Chaminade in the first game to guarantee three games against high-major competition and to end up on the other side of the bracket from Wichita State. Accomplish both of those things and Michigan should feel good about its chances to make a run in Hawaii.

Iowa, Maryland, Northwestern, Ohio State and Purdue are Michigan’s double-plays for the 2017-18 conference slate. Illinois, Indiana, Minnesota and Rutgers only come to the Crisler Center next season and the Wolverines will travel to Michigan State, Nebraska, Wisconsin and Penn State for single plays.

Facing Michigan State just once, on the road, is a drag for both schools. Michigan also misses out on Wisconsin at home, but avoids trips to Indiana, Illinois and Minnesota.

The Big Ten schools in Michigan and Indiana might be the only ones that care about protected rivalries, but maybe we’ll get them when the conference moves to a 20-game schedule.

Michigan only plays 1 of the bottom 6 projected teams in the conference twice next season (Ohio State) and only faces Nebraska, Rutgers, Penn State and Illinois once. That’s probably a net-benefit for the RPI, but definitely a net-negative in terms of the Big Ten regular season race. This will be the third year in a row that Michigan will only play Rutgers once, which is almost equivalent to starting a half game back in the conference standings.

In the span of 24 hours, three prospects with Michigan scholarship offers committed to Indiana. First it was Race Thompson pledging to Archie Miller on Sunday, then Jerome Hunter and Damezi Anderson on Monday.

It’s easy to apply logic after the fact, but it still has to be hard to stomach watching three of the six players on Michigan’s offered recruiting board pledge to a conference rival in a matter of days.

Indiana associate head coach Tom Ostrom’s ties to the state of Minnesota were critical in landing Thompson, while Jerome Hunter credited the fact that Archie Miller was one of the first coaches to recruit him back when he was at Dayton. Miller was also at every game that Hunter played in South Carolina last week, while Beilein was at most of Hunter’s games but spent more time at the Peach Jam tracking Ignas Brazdeikis, Noah Locke and Hunter Tyson.

Hunter was the biggest Michigan priority of the three commitments the one that hurts the most. But at the end of the day, it just magnifies the importance of the three outstanding offers on the board: Ignas Brazdeikis, Noah Locke and Hunter Tyson. If Michigan can round out its 2018 class with two of those three players, it will be the best class that Beilein has brought to Ann Arbor in quite some time.

Former Michigan walk-on point guard Andrew Dakich made some waves on Monday afternoon when Jeff Goodman reported that Dakich is transferring to Ohio State, not Quinnipiac, for his graduate transfer year.

The news raised eyebrows because Michigan to Ohio State transfers are so rare and a former Wolverine will be a graduate transfer on another Big Ten roster for the third consecutive season. And yes, the last two won Big Ten Championships at their schools. Those are, as far as I know, the only Big Ten to Big Ten graduate transfer and they’ve all left Michigan.

In this case, the situation is a bit different. Dakich was a walk-on in Ann Arbor and there was no shot of him earning playing time as a senior with Jaaron Simmons, Xavier Simpson and Eli Brooks on the roster. He was set to attend Quinnipiac, but didn’t get into his graduate program of choice according to MLive’s Nick Baumgardner.

This is an opportunity to play in the Big Ten, on scholarship, on a roster that is so depleted that there’s a chance Dakich could earn some reserve minutes. Add in a head coach and staff with ties to Indianapolis and it is a chance that Dakich would be crazy to pass up.

For those concerned that Dakich is going to bring Michigan’s playbook to Columbus and that the Wolverines will be compromised moving forward against Chris Holtmann, remember that Michigan is 3-1 in the four games it has played against its graduate transfers over the last two seasons. (All teams that finished ahead of the Wolverines in the standings).

Dakich certainly knows a thing or two about what Michigan does, but so does every coach in the Big Ten — especially the ones who have been around for a while.