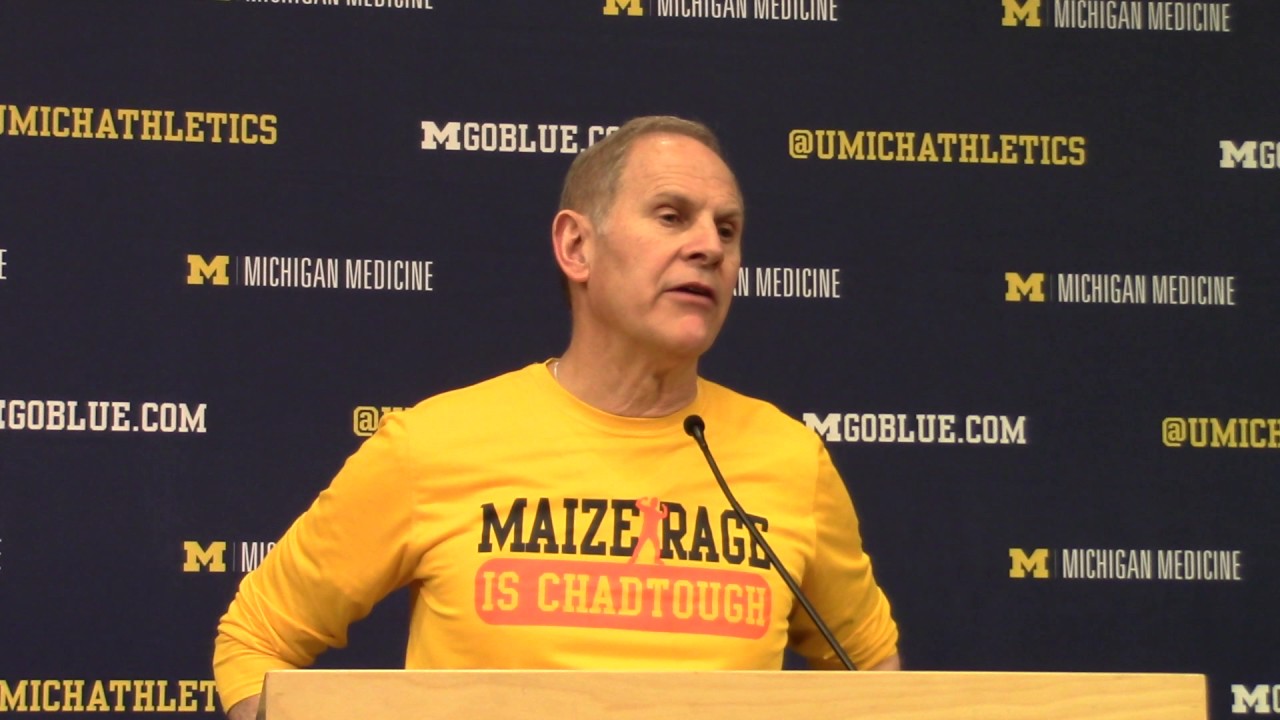 John Beilein appeared on a radio show this afternoon and talked about the Big Ten schedule and some key players for next season.

On how Michigan turned things around last season:

“Everybody has to understand college basketball is a long season. … (Inaudible due to poor phone connection) … In football you can lose a game and it ends your season. In basketball, you’ve got the NCAA Tournament. So you focus on getting better, try to win league tournament, get in the NCAA Tournament. … In college basketball, there are going to be ups and downs. Don’t give in if you have a program that prides itself in development. At the end, they’ll get better and good things could happen if the ball bounces their way.”

On regrouping after plane incident:

“You’re in a straight survival mode. It’s more serious than a game, but it’s just a game. When I’m watching my son’s team play or one of my favorite teams, I get anxiety. When I’m coaching my teams, there’s no anxiety. It’s just survival. This was a whole other means of survival. Once we got through it, it was ‘How can we grow from this?’ … They were all on the bus the next morning. For four days we couldn’t have played better basketball. It was almost a magical thing that I hope transforms all of us in the future.”

“The coaches get way too much credit for any success we’ve had. Jon Sanderson is a huge part of this. All the NBA draft choices we’ve had, he’s a huge part. In the summer, he’s our most important assistant coach. The strength coach can be with players six hours a week; we can only be with them two. Over 16 weeks that’s a big difference. … If we’re going to be good, it will be because we have strength in numbers and great attitudes all the way up and down roster.”

“He’s definitely going to be a head coach (some day). He’s got a great understanding of what’s important and what we should be emphasizing in practice, games, and recruiting. Very efficient with how he works. Our kids absolutely love him. We threw the ball in the post much more than we have in a long time, and it was a lot because he really developed our post players even more than we ever thought. Nobody ever thought we’d throw the ball in the block to Moe Wagner. This year I think you’ll see it even more with Austin Davis and Jon Teske. Watch them grow as they go along. Remember, Moe averaged three points as a freshman. Watch what (Washington) does with Austin and Jon. He had a large part in development of DJ Wilson as well.”

On bringing in a graduate transfer like Jaaron Simmons:

“We really thought a lot about it. At the time we started pursuing it, DJ and Moe were both candidates to come back. We looked at our roster and asked, ‘Where do we have the least experience?’ Not the least talent; the least experience. It was at the point guard position. Here was a kid (in Simmons) — once we reached out to him it was a no-brainer. He had experience, no baggage, wonderful kid. It could have worked out great with Xavier (Simpson) and Eli Brooks. But I didn’t want to take the chance. We do have that experience right now. Eli and X might still be the guys, I don’t know. But at least we have enough depth there that we should be OK in the experience area. Don’t be surprised if you see a lot of Jaaron. He’s been very impressive this summer.”

“It’s been very good for us. We’ve had six going back to Trey Burke. That’s a pretty high number. You have to sell that. At the same time, DJ averaged two or three points a game the year before. It’s tough to think about your roster one or two years from now when that’s how you’re recruiting. We really weren’t recruiting that position because we thought we’d have DJ and Moe back at the 4 and 5. But it also allowed us in 2018 to sell that with young men that it has or will work out: We’ve been able to win, graduate, and develop pros. We want them to want it all — to put academics first, team second, and pro (prospects) third.”

“I don’t think you’re going to see that with us. We call them the ‘pros at the prom.’ When they go to the prom everyone knows they’re going to be pros. There are not a lot of them. If they want to go to Michigan we’ll take them, but that’s not how we’re going to build a program. We’ve had a lot of success getting really good kids who are pros at their college prom. You get guys on their way up, guys who people haven’t identified as early, and work with them. Our assistant coaches have done a great spotting kids on their way up, not kids who everybody knows is a finished product.”

“When he got off to a bad start last year we thought he had actually put on too much weight. We scaled it back. Now just trying to get him stronger without putting on more weight. He’s had a great summer. He does more than just go out and make a couple hundred threes each day. He’s doing defensive slides, working on his agility, running court harder. You can’t get open if you’re just relying on help defense; they don’t leave him. We’ve got to get him open and he’s got to get himself open. He’s been working on his quickness and his versatility as both an offensive and defensive player.”

“I wouldn’t make too much of that. Being there in the championship game, it could be a bounce of the ball, an official’s call, a play out of nowhere. I’d be more worried if we hadn’t had a team in the Final Four. The state of Michigan should be really proud that both Michigan and Michigan State have been there the last four years. … I’d be more concerned if we weren’t making it to the Final Four. It’s a great league. Just watch, it won’t be long. These trends will change as far as breaks going our way. I do think we’ve been hit hard by NBA attrition maybe more than other leagues. Think of if Mitch McGary comes back in 2014. He wanted to come back. What could we have done that year? We were a shot away from getting back to the Final Four. But don’t make too much of it. There’s certainly not a difference in talent or coaching. Just a couple bounces of the ball.”

“We felt it would be important to grow the league by playing in Madison Square Garden (for Big Ten Tournament). Only weekend we could get was a week earlier. So we would have had a really compressed schedule. In early December, it’s the first weekend when football is over. Championship game somewhere in Big Ten. But students are on campus, exams haven’t started. Campus will be ramped up. Dave Gavitt used to say, ‘College basketball knows how to end a season. Doesn’t know how to start it.’ By putting better games in November and December, I think it’s a better way to start season and get some attention earlier in the year.”

On Michigan and Michigan State not playing twice next season:

“There’s a movement afoot to protect rivalries, so Michigan and Michigan State would always play twice. Indiana and Purdue. It’s not done but I support it. Tom Izzo supports it. We think it’s the right thing to do.”