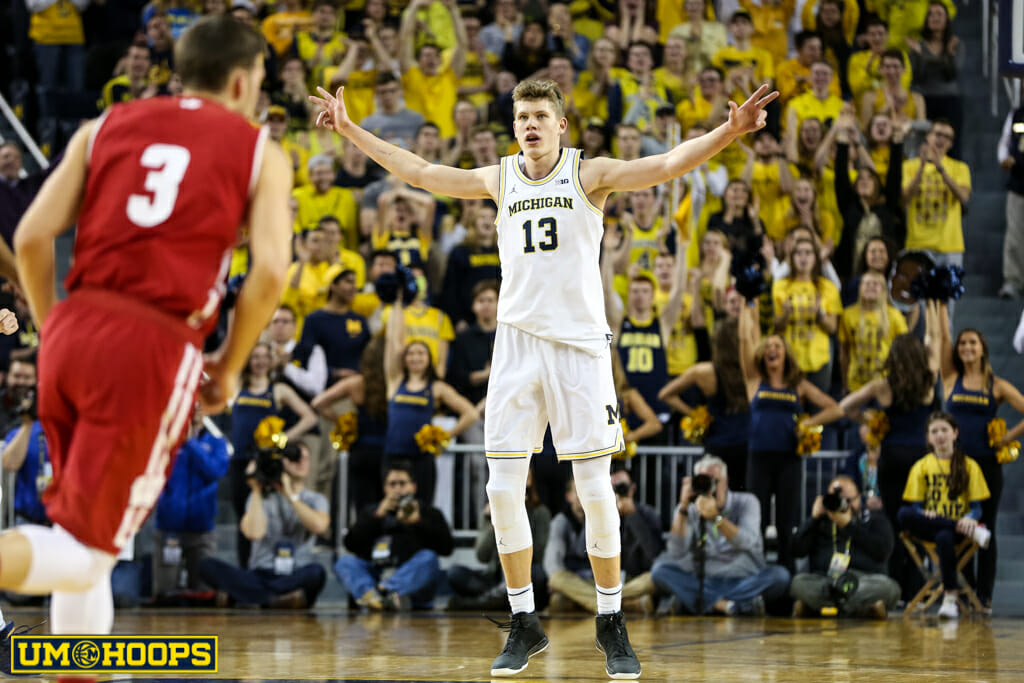 The Big Ten announced the conference schedule on Wednesday afternoon and it is one of the more unique slates in league history given an array of different constraints. The Big Ten had to schedule around a new television partner, a Super Bowl in Minnesota, the conference tournament being a week earlier, and Northwestern not playing in their home stadium.

Here are some takeaways now that Michigan’s schedule is complete.

The Big Ten announced the conference schedule on Wednesday afternoon and it is one of the more unique slates in league history given an array of different constraints. The Big Ten had to schedule around a new television partner, a Super Bowl in Minnesota, the conference tournament being a week earlier, and Northwestern not playing in their home stadium.

Here are some takeaways now that Michigan’s schedule is complete.

1. We’ll know who Michigan is before you finish your Christmas shopping

The Maui Invitational will be a critical early test before Thanksgiving, but the five-game stretch a week later will tell us everything we need to know about Michigan. The Wolverines will play at North Carolina, vs Indiana, at Ohio State, vs UCLA and at Texas over a two-week span from November 29th through December 12th.

Remember, Michigan’s non-conference slate could be one of the toughest in the conference if it wins a couple of games in Maui, and sandwiching two conference games in the middle makes things even more difficult.

The non-conference road games at North Carolina and Texas that bookend the stretch both should be very tough, but the three games in the middle might be the most important. You might drop one, or both, road games, but winning a home non-conference game against a UCLA program that should be rebuilding a bit after losing Lonzo Ball and TJ Leaf is critical. And now that game will come in a high-leverage spot after a pair of conference games.

Landing an early Big Ten game at home against Indiana on a Saturday, before final exams, should be a nice boost for season ticket holders, but the results could shape the Big Ten season. It’s one thing to roll into Iowa City on January 2nd with a pair of conference wins, but imagine making that trip with an 0-2 conference record.

One of the toughest stretches on the conference schedule runs from January 25th through February 11th. During that span, Michigan will play against five teams projected to make the NCAA Tournament with three games on the road.

That includes trips to Purdue (January 25th) and Wisconsin (February 11th), two venues where the Wolverines have struggled historically, along with two games against Northwestern and a home game against Minnesota.

The Big Ten will feature Friday night hoops action for the first time in conference history, but Michigan won’t take part in the fun. The Wolverines didn’t draw any Friday night games and will stick to regularly scheduled programming.

There seems to be some rhetoric about Monday and Friday night games being part of the condensed schedule, but this move seems primarily driven by television. The new Big Ten rights deal with FOX means that FOX, FS1 and FS2 will air between 39 and 47 Big Ten games (both conference and non-conference games) and the games on FOX Networks will be played on Mondays and Fridays.

If you want to watch Big Ten basketball this winter, you’ll be able to on almost any night.

“Only the NFL has more media rights agreements than the Big Ten does,” Rudner said. “The good news is with FOX came a lot more exposure. We’ll be playing every day of the week: Monday through Friday, Saturday and Sunday. From Tuesday, January 2, through Sunday, February 25, those 55 days, we will have Big Ten basketball played on 51 of those days.

Michigan’s home games against Maryland (January 15th) and Northwestern (January 29th) are both scheduled for Monday nights at the Crisler Center and will likely be broadcast on FS1 or FS2.

The new Friday and Monday games also mean that weekend/weekday games are no longer a 50-50 proposition. Michigan will play 8 games on weekends and 10 games on weekdays, but does draw five weekend home games (Indiana on 12/2, Illinois on 1/6, Rutgers on 1/21, Minnesota on 2/3, and Ohio State on 2/18).

The Big Ten had to sandwich 112 games into a 55-day window to make up for the early Big Ten Tournament in New York City which resulted in one of the most condensed conference schedules to date.

While the consternation about having a week to rest up before the NCAA Tournament seems a bit over the top — change can be scary, but plenty of other conferences manage to survive this difficult off week just fine — the condensed schedule is a real problem.

Playing league games on one day of rest had been unheard of in the league recently, now everyone will do it at least once.

Over the past two seasons, Big Ten teams have had a combined one (1) one-day prep window. This season, there are 34. #Nebrasketball has 3.

That could be particularly problematic for a Michigan program which usually utilizes a short rotation and has tended to perform better on extended rest during the conference regular season.

Michigan opens the (January) Big Ten schedule at Iowa for the second year in a row and it also wraps up the conference season with back-to-back road games once again.

Those tough road losses at Northwestern and Minnesota late in the season appeared to galvanize the Wolverines in 2016-17, but it doesn’t look like things will get any easier this year down the stretch.