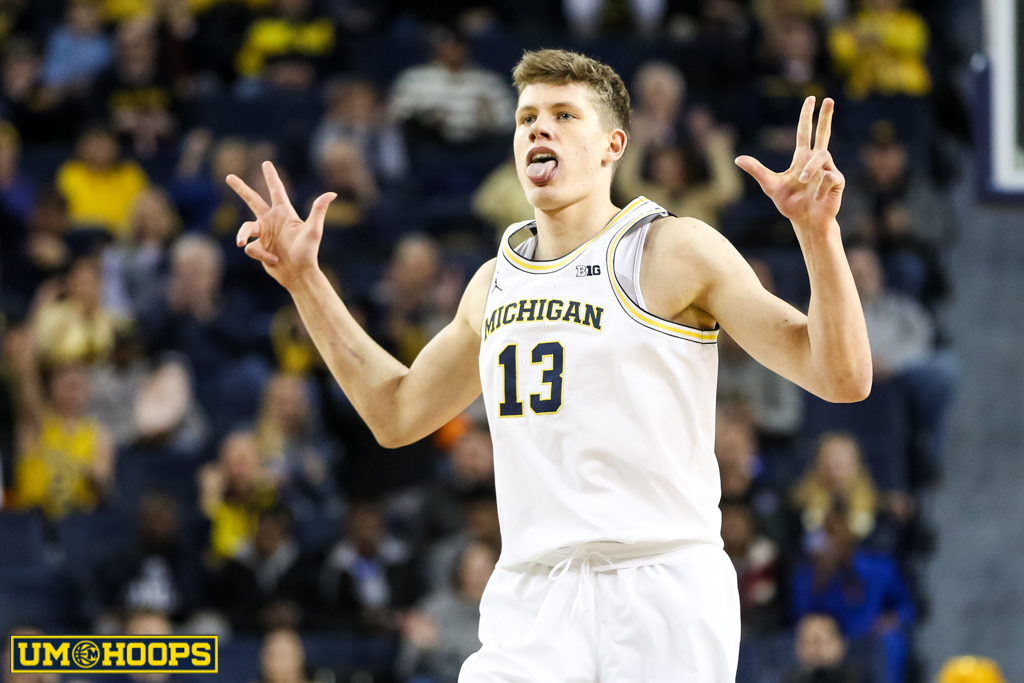 Can the unproven entities shoot well enough from downtown to keep the Michigan offense humming?

The question posed in this story’s headline—Can the Wolverines shoot?—may seem like a ridiculous one for a team coached by John Beilein. He coached Kevin Pittsnogle and Nik Stauskas. The man has his own basketball, for gosh sake. But with the departure of several three-point threats from last year’s team, effective outside shooting is no longer a given.

Last season, we witnessed the power of a lineup with five capable shooters, as Michigan spread the floor, forcing opposing defenses to scramble. Forty-five percent of the Wolverines’ field goal attempts were threes (18th-highest rate in the country); they connected on 38.5 percent (30th-best). The result was the fourth-best offense in the country, per KenPom.

Moritz Wagner, Duncan Robinson, and Muhammad-Ali Abdur-Rahkman were part of that lethal attack, and they return. Derrick Walton, Jr., Zak Irvin, and D.J. Wilson do not. They’re replaced by players whose shooting prowess is far more uncertain.

In addition to the aforementioned trio of returning Wolverines, transfers Jaaron Simmons and Charles Matthews are likely to start. Three incoming freshmen, redshirt freshman Austin Davis, and sophomores Xavier Simpson, Ibi Watson, and Jon Teske will also compete for minutes. Of that group, only Simmons has proven he can shoot at the college level (70-of-190, 37 percent from three in his career) — even if Keith Dambrott disagrees.

Just as often as a television announcer will tell you Beilein was never an assistant coach, he’ll tell you Beilein values shooting. It’s true, and he works tirelessly to develop it. He requires non-big men to make 60 threes in five minutes (the bigs have to make 50). He is fixated on fundamentals, and that includes pre-shot footwork, release technique, and shot rotation. Beilein is particularly annoyed by attempts that miss short, a wise preference given the physics of a shot. Michigan’s Noah’s Arc technology can help correct a player’s shot trajectory.

That was an issue with Watson last season. In late December, Beilein was asked about Watson’s development and said, “He’s shot it better in practice but not where he needs to be. He needs to get his shot off quicker. He’s got way too much arch on it all of a sudden; I mean, way up there. There are some things we’re working on with him.”

Watson played just 16 minutes after that and finished the season 1-of-18 from deep. Simpson saw a lot more game action but also struggled with his jumper (5-of-19). Sure as they’re in the gym regularly hoisting shots, Beilein is working on their confidence. If they can connect in practice they’ll be encouraged to let it fly in games.

David Merritt, a former Michigan captain, was not a high-volume shooter, but he shot 39 percent from deep during his two seasons. “There were times I’d pass up shots because that wasn’t necessarily what I was fully confident in,” Merritt said. “Coach would take me aside and say, ‘Dave, man, if you don’t shoot that thing, why do I have you out there?’”

Far more often we hear Beilein scold players for not shooting—Robinson is a good example from last season—than for the opposite, and he’s no different in private.

Robinson and Wagner figure to stretch the floor like they’ve done in years past. And Abdur-Rahkman has turned himself into a reliable shooter, shaking off a rough start to finish at 38 percent (42-of-111) last year. Simmons will have to adjust to the Big Ten, but the three-point line is the same everywhere. The other guys are unknown entities.

Of the incoming freshman, Jordan Poole is billed as the best shooter. “His shot is deadly off the catch and he oozes confidence,” according to ESPN, which compares him to a high school version of Steph Curry. Fellow incoming freshman Eli Brooks and Isaiah Livers are also capable shooters, with Livers’ sweetspot coming more in the mid-range.

Many good high school shooters struggle as college freshmen and, in order to get playing time, they’ll have to prove they aren’t major liabilities in other phases of the game.

That brings us to Matthews, who attempted just four three-pointers in one season at Kentucky. Beilein gushed about his play on both ends of the floor on last year’s scout team, saying he could fill a Tim Hardaway, Jr.- or Caris LeVert-type role. Given his athleticism, perhaps the 6’6”, 200-pound Matthews could look similar to Glenn Robinson III. All three of those former Wolverine stars land on the chart below, which shows Beilein’s Michigan rotation players under 6’7” who, for a particular season, made fewer than one-third of their three point attempts:

If the criteria seems overly specific, the goal was to find non-big men who played consistent minutes for Michigan and were below-average shooters. The chart reveals a bad offense with several underperforming shooters (2008, 2010) and two capable shooters—Irvin and Hardaway—who had a bad year.

The same chart, minus the players who took more than 40 percent of their field goal attempts from beyond the arc, is perhaps more revealing. This allows us to focus on players who were not only poor shooters, but didn’t even attempt many three-pointers.

There are a couple of good offenses (2009, 2011) and two great ones (2013, 2014) that survived a “bad” shooter. Those players brought other elite skills to the court: athleticism and scoring inside the arc (Robinson III), slashing (Manny Harris), exceptional passing (Darius Morris). Matthews can bring some of that. Simpson showed promise last season both as a distributor and an on-ball defender.

The potential is there for several suspicious shooters to prove themselves and contribute in other ways. Michigan has enough returning offensive firepower that it just needs the right answer to one or two of its question marks. But it is also valid to question how many questionable shooters can be inserted into the rotation before the offense starts to suffer.