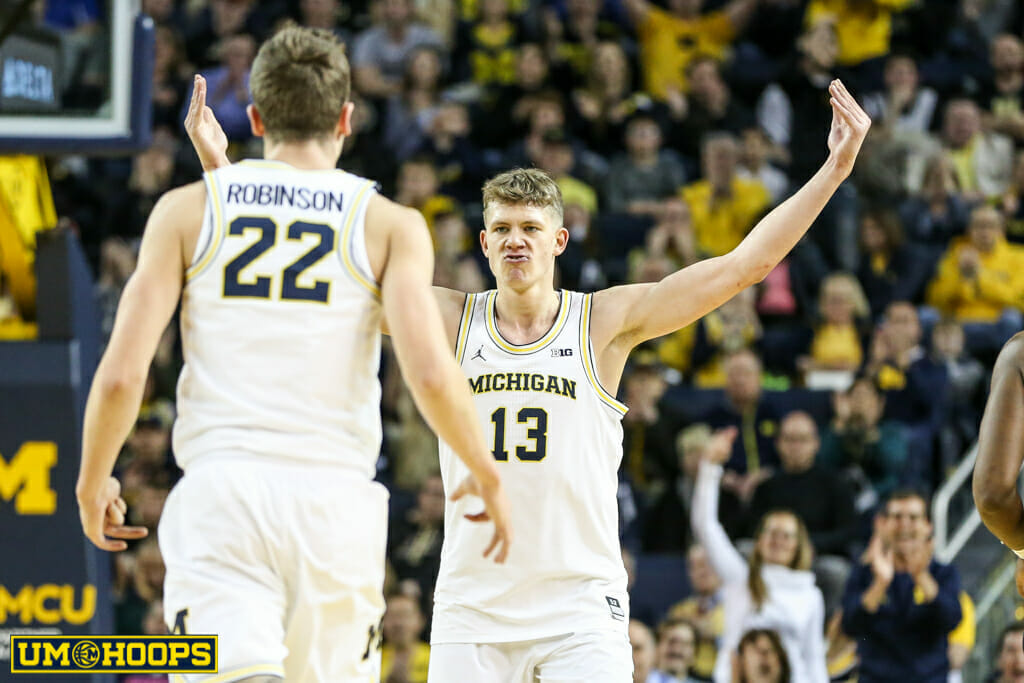 John Beilein met with the media for the first time since Michigan’s 2017-18 practices began. Here’s what you need to know.

Basketball is back in Ann Arbor.

“I’m so excited about the first couple of days of practice,” said Michigan coach John Beilein Wednesday afternoon. “It’s been a good preseason.”

This may be one of Beilein’s most interesting teams in his tenure at Michigan. The Wolverines, as he mentioned, lost a lot from last year. This will be a relatively fresh-looking squad without Derrick Walton Jr., Zak Irvin, DJ Wilson, Mark Donnal, Andrew Dakich or Sean Lonergan. There will be the usual growing pains that come with a developing team — last year’s Sweet Sixteen squad knew that better than most.

Of course, none of that hasn’t dampened Beilein’s outlook on the season.

“We’re really excited about this season,” Beilein said, “and looking forward to you guys getting a look at them sometime down the line.”

Here are five takeaways from Beilein’s first public comments of the 2017-18 season on  Wednesday.

The scandal that broke last week after a lengthy FBI investigation sent shockwaves throughout college basketball. Beilein, who was voted the nation’s cleanest coach, and Michigan emerged unscathed. Yet Beilein still had plenty to say about the investigation and its aftermath.

“I guess I was surprised because the FBI was involved,” Beilein said. I think we all were. … If the FBI is involved, it really must be serious.”

Beilein doesn’t think the “sky is falling.” Yes, he recognizes that there are those who cross the line — but he doesn’t believe that cheating is “rampant” across the nation.

He does, however, believe that the punishment faced by those who broke the law is justified.

“If people are breaking laws, if people are committing felony crimes in our business, then get them the heck out our business, if that’s what’s happening,” Beilein said. “Do I feel good about it? No. You hate to see … it affects their families, their coaching staffs, their university, the players that are there. That doesn’t make me happy.

“At the same time, this game is such a great game and college basketball is my life, and it should be clean. This element should not be a part of it.”

There’s less uncertainty now with Moritz Wagner. Michigan knows what is getting: a potent offensive threat, a ‘5’ who plays with all the deftness and touch of a scoring wing. There’s still development to be made, of course. Beilein referred to Wagner as having a mindset similar to former star Trey Burke, where he constantly seeks improvement. Yet Wagner is as close of a sure thing as there is on the roster.

The other big men? Not quite so — though they’re both certainly trending upward.

“They’re developing,” Beilein said of sophomore Jon Teske and redshirt freshman Austin Davis. “I think we saw with Moe, Moe would level off, then he’d make a spike, he’d level off and make a spike. This is more gradual with these two.”

According to Beilein, both Davis and Teske have made notable physical changes.

“Their quick twitch is changing, their lean muscle mass is changing, but their brains are still telling them, ‘I’m a slow big kid,’ ” Beilein said. “Yet they can move faster. They’re making great progress. We’ve just got to get them now to have a little bit more edge in what they’re doing. I think you’ll see it. Both of them are really skilled. But they’re going around 211 degrees, and they’ve got to get to 212.”

“He was 285, almost 300 pounds at one time,” Beilein said. “His whole life he’s been a large, husky boy. … He can really run, but he’s got to program his mind to really run right now. He’s got the quickness now to compete more than ever, but now he’s got to compete.”

With Teske, meanwhile, Beilein wants to see more aggressiveness on the offensive end. And similar to Davis, Teske has also shown enough positives that have Beilein impressed with the young center.

“… Jon is a really good shooter. ‘Jon, will you please shoot it?’ ” Beilein said. “And he’s rebounding it better, he’s doing a lot of good things. He is a full 7-foot-1, and one of the finest young men I’ve ever been around.”

Beilein didn’t rule out that this year’s defense would follow the same path as last season’s — significant early-season struggles before much better results as conference play rolled on.

He does think, however, that it may be one of the best defenses he has fielded in his time at Michigan, and there have already been several individual standouts through the first few practices.

“Zavier’s bringing it every day at everybody,” Beilein said. “Jaaron knows how to play defense as well, and Charles Matthews has really showed an ability to really defend people.”

Matthews, a transfer from Kentucky who sat out last season, may play a large role on offense as a playmaking wing. Yet for now, Beilein believes his defense will be his “biggest positive addition” to the team.

“He’s very bright,” Beilein said. “We used to try and trick him last year with plays that had been run all the time and then counter, and he’d be sitting on it more times than he wasn’t. So that’s the biggest area.

The proposed change to NCAA rules that would allow transfers to play immediately — instead of sitting out one year, as Matthews did — led to Beilein joking around with one of his former assistants now at a mid-major school.

“I said, ‘This is perfect. We’ll just recruit off all your teams. As soon as you’ve got a good player, we’ll go get him,’ ” Beilein recalled. “I mean, how crazy is that? We wouldn’t to have to go recruit. We wouldn’t have to deal with the AAU guys. Just look at who’s the MAC All-Star team (and) get them to go to Michigan.”

“I hope we don’t go in that direction,” Beilein said. “That’s not right to do to the mid-majors, to the low-majors, or to each other, who we’d be flipping teams like crazy.

“We can’t make a rule on everything. It can’t always be equal opportunity. I think it’d really have a negative impact on the sports that have a one-year transfer rule.”

Beilein refused to differentiate his three-man freshman class, comprised of Eli Brooks, Isaiah Livers and Jordan Poole. He wouldn’t comment on whether any member of the trio has set himself apart, or what some may be doing better than others.

Beilein did comment on something he’s noticed from all three, and that’s a head start on the mental aspect of the game.

“These three seem to have a sense about what the next play is, and you won’t always see it all the time, but that’s my early look at them, early observations.”

Beilein did go further in depth on Livers when commenting on the depth at the ‘4’ between the freshman and senior Duncan Robinson, praising Livers for his shooting stroke, a “great ability” to pick things up and athleticism that is better than what Beilein and his staff expected.

And he wasn’t just complimentary of his new players — he had high praise for his two new staff members, assistant coaches Luke Yaklich and DeAndre Haynes, as well. Both Yaklich and Haynes were hired away from Illinois State this offseason to replace Jeff Meyer, who left for Butler, and Billy Donlon, who joined Chris Collins at Northwestern.

Yaklich, according to Beilein, has been “extremely well-organized” and has brought many new ideas — which he sends in a long email to Beilein “almost every night.” Haynes, meanwhile, has stood out through his coaching during individual workouts, impressing Beilein with “a great deal of imagination and initiative.”

And it’s that last quality — taking initiative — that Beilein wants to foster in both of his new staff members, thanks to one of his reading choices last year.

“I want to give these guys initiative to go out and find answers for us,” Beilein said. “I read Phil Knight’s book during last season and it really helped (me) how he gave such latitude to people to grow and I’m trying to do that more and more right now by allowing them to help me find answers, not all channeling through me all the time.”