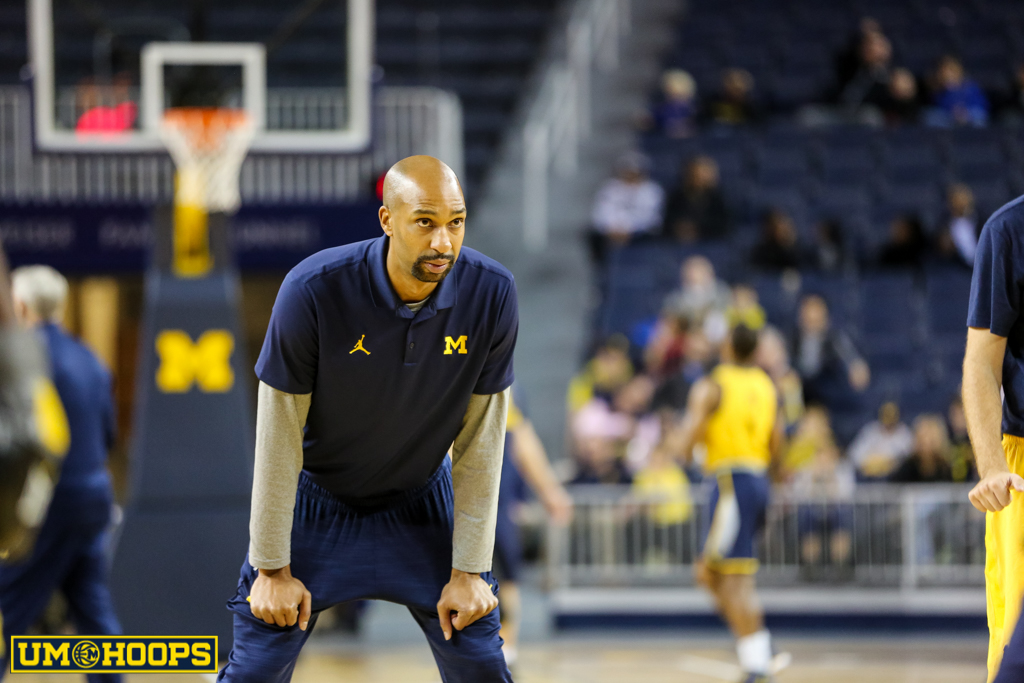 Michigan players and coaches were on the radio today. Here’s what you need to know after 6 days of practice.

With six days of practice in the books, John Beilein wasn’t ready to make any proclamations about the 2017-18 Wolverines, but he shared some updates on their progress during a Tuesday afternoon radio appearance on the Huge Show.

Beilein, his assistant coaches, Moritz Wagner and Jaaron Simmons all joined the radio show to discuss practice and the upcoming season.

The Michigan head coach hit on the national recruiting scandal — “I probably would have reported it if I knew it.” — and there were plenty of questions about Michigan’s plane crash back in March, but here are five takeaways pertaining to the upcoming season.

Early in the season, defense tends to be ahead of the offense and Michigan is no exception. While John Beilein stressed that he rarely loves a team before February (an impressive statement considering he’s coached a team that entered February with a 20-1 record), he admitted he sees some things he likes with this year’s team.

“I don’t know,” he said. “We’ve had six days of practice. I like some things. Their energy is incredible and they really work hard. Defensively right now they probably have both a will and a skill to be a better defensive team. We couldn’t have been much worse than we were last year at certain times. I love that part of us right now. We have a great connectivity as a team.”

Moritz Wagner has been impressed with how well the team has come together despite so much roster turnover.

“You’ll never hear me saying that my team looks bad, because I’m a confident guy,” Wagner said. “But I think this team looks great. I’ve never been a part of a team that is so committed to each other. Which we have to be because 11 of our guys are either freshmen or sophomores. So there has to be a certain determination and commitment.”

Jaaron Simmons is the oldest and most experienced player on Michigan’s roster, he’s also only been learning the Wolverine offense for a few months. Beilein isn’t concerned and is happy with how he’s cominga long.

“He’s fit right in,” Beilein said of the Ohio transfer. “He came in this summer and began working out with our team. He’s an experienced player. I just watch him grow every day. He’s gotta learn a whole new system and has to do it in a shorter time. He’s embracing many of those things.

“Then there’s just basketball that everyone plays the same. Probably 80% of it is exactly the same, maybe we’re 20 percent different than other people. That 20 percent, he’s getting better at… He’s a winner.”

The comment reminds me of former Wolverine guard Nik Stauskas, who would tell his coach that “it’s just hoops” when faced with a complicated scheme or a bit of adversity.

Jaaron Simmons has been playing basketball for a while now and at a certain point basketball is about making a play not following a play. Simmons has excelled in those spots in the past and should continue to do that when the lights come on in November.

“The one thing you can’t replicate is actual game experience and he has that,” assistant coach Saddi Washington said of Simmons. “I think he and (Zavier Simpson) will play off of each other really well.”

“He’s really good. He can tear a team apart single-handedly, but he’s really mature and has a high IQ to where he knows the game,” new assistant coach Deandre Haynes explained. “To play here under a coach that’s really good with offense… Once he figures out coach’s offense then he can pick and choose his spots on the floor, he’s going to be a lethal player.”

Don’t ask Simmons about what it means to move to the Big Ten or a new team, because it’s just hoops.

“I just look as basketball as basketball,” Simmons said. “I really could care less about the conference… It’s the same you have to go out there and produce.”

It’s a good thing that live basketball action is around the corner because John Beilein is running out of players to compare Charles Matthews to. Matthews has been in the program for well over a year now, but he’s yet to take the floor due to NCAA transfer regulations.

Beilein has compared him to Glenn Robinson III, Tim Hardaway Jr. and now even Nik Stauskas.

“Charles Matthews has a lot of abilities,” Beilein said. “A little Hardaway, a little Stauskas in him. He didn’t get shots at Kentucky as a freshman. They were loaded with talent and it’s nobody’s fault. He’s gonna get shots here now. It’s going to be a great opportunity for him to grow. I love his defense and his rebounding, that will really help us.”

Matthews attempted 52 shots in 370 minutes during his freshman season at Kentucky. If things go according to play, he could get that many shots up before Thanksgiving this season.

“He’s been a guy… every practice he’s ended up being our leading rebounder,” Haynes said of the 6-foot-6 Kentucky transfer. “He’s going to surprise a lot of people in the Big Ten. He’s been really great on the floor and been watching extra film with coach and he’s been surprising me a lot.”

“He can put it on the floor. He’s blessed athletically to where he can just jump over guys. He’s really good.”

4. Checking in on the freshmen

Michigan adds three freshmen to the mix this season and Beilein thinks that they “could be more ready to play than some other classes we’ve had.”

He discussed the incoming group — in the order that they committed so as not to show preference — with a few quick hitters.

While Michigan has only help six practices this fall, Jon Sanderson has been working with the team almost every day this summer.

He provided some updates about Michigan’s offseason progress in the weight room. Charles Matthews was the first name that Sanderson mentioned, noting his progress over his redshirt season.

“Showed up at 6’6″, 178 pounds and currently weighs 200 pounds,” Sanderson said of Matthews. “He’s a man. He’s always been explosive but he’s more explosive, stronger and he’s balanced. He had a phenomenal summer and redshirt year.”

Sanderson also noted that Ibi Watson and Zavier Simpson made impressive improvements to their vertical leaps and explosiveness.