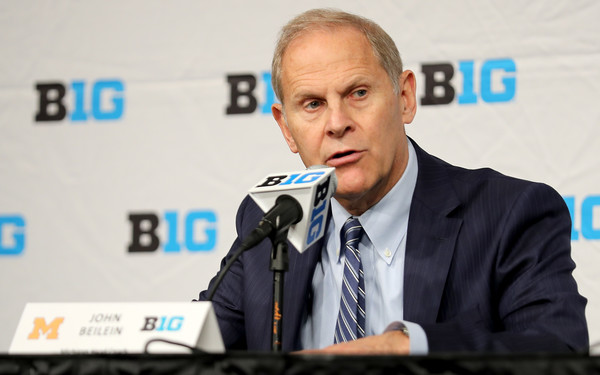 On Thursday, however, Mortiz Wagner. Duncan Robinson and Muhammad-Ali Abdur-Rahkman represented the Wolverines at the microphone, as the World’s Most Famous Arena played host to the conference’s annual media day.

From the trio of Michigan players to comments from John Beilein, here are five things to know from Thursday.

Much to the ire of fans, Michigan and Michigan State will play once this season — a lone January matchup in East Lansing. But today, the conference announced that the two schools — along with other in-state foes in Northwestern-Illinois and Purdue-Indiana — will play twice-per-year starting in 2018-19.

The Wolverines and Spartans have one of the preeminent — if not the premier — rivalries in the Big Ten. They should play a home-and-home each year, and the conference finally took appropriate action.

“And there was no doubt, as Tom and I talked about this, that we should be playing twice every year,” Beilin said. “We’re doing it in football, and in basketball it just makes so much sense, both interest-wise, financially, the whole deal. It’s just like a great concept that we’ve both embraced.”

The Big Ten also announced that next season will be the start of a 20-game conference slate — up from the traditional 18.

Added Iowa coach Fran McCaffery: “The 20-league schedule, I think, is a matter of just sort of what you have to do. I think the analytics will tell you that playing 20 league games will provide a greater strength of schedule for all of us.”

To little surprise, Wagner was named to the All-Big Ten Preseason team Thursday morning — one of ten selections.

Wagner averaged 12.1 points and 4.2 rebounds per game for the Wolverines last season, but will undoubtedly have a bigger target on his back this time around.

“Yeah, I think it’s really hard (to manage those expectations),” Beilein said. “He just has to get back to doing the right thing every day. If anyone can handle expectations, Moe can.”

A Wolverine has now been selected to the All-Big Ten Preseason team each of the last six seasons.

“(The battle) is so competitive right now,” Beilein said. “The intensity is probably like nothing we’ve ever seen. This one is three guys going at it. It’s really tough to even decide because nobody’s making each other look good because the competition is so hard.”

The presumed choice for the starting spot is Ohio transfer Jaraan Simmons, who averaged 15.9 points, 6.5 assists and 3.5 rebounds per game in his final season as a Bobcat. Yet, the complexity of Beilein’s system given how little time Simmons has to learn it throws a wrench in the conversation.

Simpson — who appeared to be the de facto starter before Michigan choose to pursue Simmons — has also made strides in the offseason.

Averaging just over eight minutes per game last season, Simpson will need to become a more assertive offensive player to earn more playing time — something that Beilein has noticed this fall.

“Yeah, I think he was four-of-six yesterday in a scrimmage,” Beilein said. “He’s a great leader, he defends really, really well. He’s evolving as a player, and anything can happen in the next couple of weeks. I think people are going to love the progress he’s made in the last year.

“Hopefully, the cream will rise to the top, and then we’ll have a guy.”

“We maybe have the most challenging schedule that certainly I’ve ever had at Michigan or maybe Michigan’s ever had,” Beilein said. “And we’re going to have to be ready for it and be ready early for it.”

Those tests include a trip to the Maui Invitational, Big Ten games against Indiana and Ohio State, road games at North Carolina and Texas, and the return of a home-and-home series with UCLA — all smashed into a three-week stretch starting at the end of November.

“It’s a monster of all monsters,” Beilein said. “I don’t know how we’ll do. We could do really well or we can do really poorly — I don’t think it’s going to make a difference. We’re just going to keep growing and growing.”

Beilein is aware of the physical toll that stretch will have, and is already stressing more than just court work in practice.

“I think the biggest thing is going to be about rest,” Beilein said. “And hopefully that’s why this month has been so important to us.

“We’re virtually using four hours every day, whether it’s film, walk-through, a couple of hours of practice. We know during that time, time probably off our feet is going to be more important than practice.”

With the losses of D.J. Wilson and Mark Donnal, front court depth is a clear question mark for the Wolverines.

Michigan returns just two players, Duncan Robinson and Moritz Wagner, who saw action at the four or five last season. The duo accounts for just 54% of the 3070 minutes of game action logged between the two spots. The Wolverines also have to replace 60 percent of their defensive rebounding from a season ago.

Despite limited experience, Austin Davis and Jon Teske are likely candidates to replace that production.

“I think both have progressed a lot,” Robinson said. “Austin has lost a lot of weight and is moving a lot better. For Jon, the biggest thing for him is the mental approach — just between the ears and understanding that he has to compete with toughness a sense of urgency. I think he’s rose to that occasion in practice.”

“Those have improved and (they) are challenging Mo in practice.”