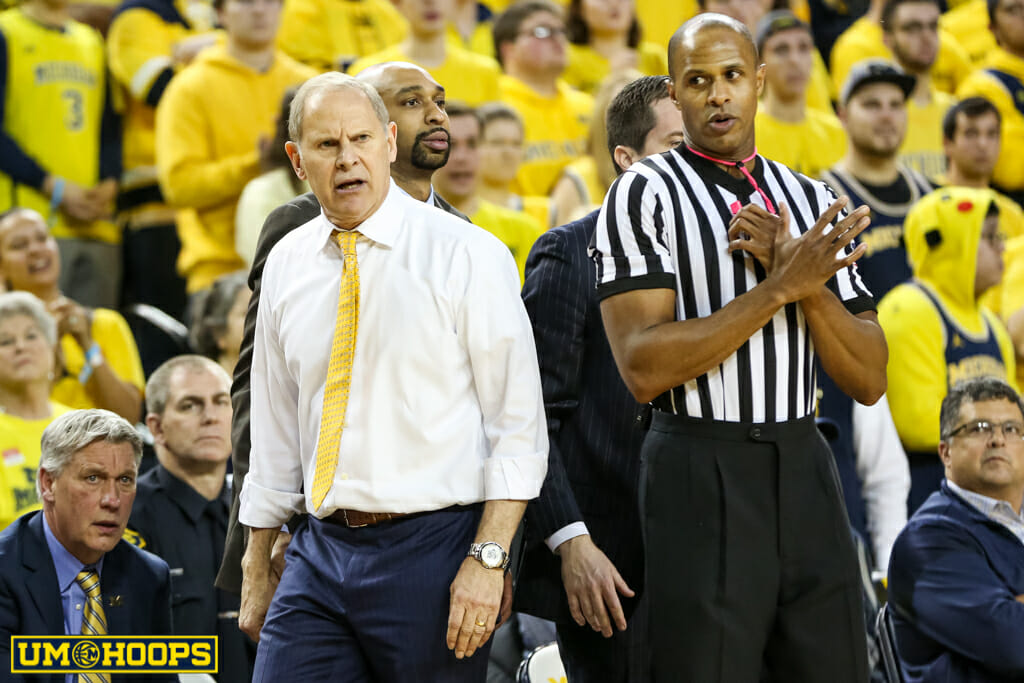 John Beilein was on the podium this morning in New York City at Big Ten Media Day. The Wolverine head coach discussed his team’s difficult schedule, the magic of playing a conference tournament in New York City and what he’s seen from his new players.

John Beilein was on the podium this morning in New York City at Big Ten Media Day. The Wolverine head coach discussed his team’s difficult schedule, protected rivalries, the magic of playing a conference tournament in New York City and what he’s seen from his new players.

And so it’s time to get into our regular season and just three weeks we’ll be playing our first games. We maybe have the most challenging schedule that certainly I’ve ever had at Michigan or maybe Michigan’s ever had. And we’re going to have to be ready for it and be ready early for it.

Q. You had Andrew Dakich transfer out and go to Ohio State. What was that conversation like when he decided to transfer and what does he bring maybe off the floor and on the floor in terms of his talent?
COACH BEILEIN: Chris called me first. I didn’t hear from Andrew yet. And Andrew — that was almost simultaneously. But I support it 100 percent. Andrew paid his way for three and a half years to go to Michigan.

And we wanted to save a redshirt year for him to be able to go on scholarship somewhere, work on his Master’s degree. That was actually the plan. I don’t know if the plan was for him to be a Buckeye, but he grew up in that state. He’s a wonderful young man and really like Chris and his staff and it’s good. He’ll really help them. He helped us win a lot of games, not on the floor but in practice.

Q. You were a Big East coach. Can you sort of share what the experience is going to be like for the Big Ten teams getting to play at Madison Square Garden? And do you think that that experience justifies moving the whole thing up a week?
COACH BEILEIN: Yeah, absolutely. I mean, when we were in the Big East, you know, there would be the Syracuse fans and the Georgetown fans and the Villanova and West Virginia. And it was like you would walk down the streets, particularly in this locale, and there’s just energy.

It was like an early March Madness type of energy. And who was going to still be here on Saturday? So it’s the same idea, only it’s on Sunday.

And so I think it’s going to be tremendous. Our fans — I mean, who does not want to go and spend a few days in New York City? I think for all the fans, there’s so much to do and it’s a great idea.

We certainly have to make some sacrifices with the week and the schedule and all those things. In the long run, it will be worth it.

Q. Michigan/Michigan State rivalry now being protected. I guess what’s your feelings on that and also on the 20-game schedule, if that is one of the big things to help get that rivalry protected?
COACH BEILEIN: In our meeting, it was pretty unanimous to go to 20. And there was no doubt, as Tom and I talked about this, that we should be playing twice every year.

There’s never a doubt in any way, shape or form. And it’s what should be happening. I think it’s the way that — it’s really smart scheduling for us. We’re doing it in football, and in basketball it just makes so much sense, both interest-wise, financially, the whole deal. It’s just like a great concept that we’ve both embraced.

Q. You play five high major teams in a two-week stretch, both conference and non-conference, you’ll be zigzagging back and forth across the country. Is there a different type of preparation you would have in those games versus games in conference where the traveling is a little bit less? Do you treat it like a mini NCAA Tournament or have you not thought that far ahead yet?
COACH BEILEIN: I think about it all the time because we’ll also be coming from Maui before we get into that. So it’s really going to be difficult. I think the biggest thing is going to be about rest. And hopefully that’s why this month has been so important to us.

We were virtually — we practiced five days a week. We’re virtually using four hours every day, whether it’s film, walk-through, a couple of hours of practice, because we know during that time, time probably off our feet is going to be more important than practice.

So, no, it’s really challenging. Obviously we set that up with UCLA and Texas before we knew we’d be playing that weekend. But we embraced that sudden change, and we’re going to do the best we can. And I know we’ll be really prepared for the second semester based on that schedule.

Q. Having to replace three starters and adding three freshmen into the mix, how do you see the offensive character of the team being different from last season?
COACH BEILEIN: It’s going to be difficult. Right now, if you saw yesterday’s practice, you could say we have no chance of scoring a point in any basket in any game. But we’re just — every day is a new way of discovering where these young guys can help us.

Isaiah Livers has played well. Eli Brooks, they’ve done a great job. Jordan Poole, we can see his development. And we have Jaaron Simmons and Austin Davis, guys that have never played in a game at Michigan. These are important.