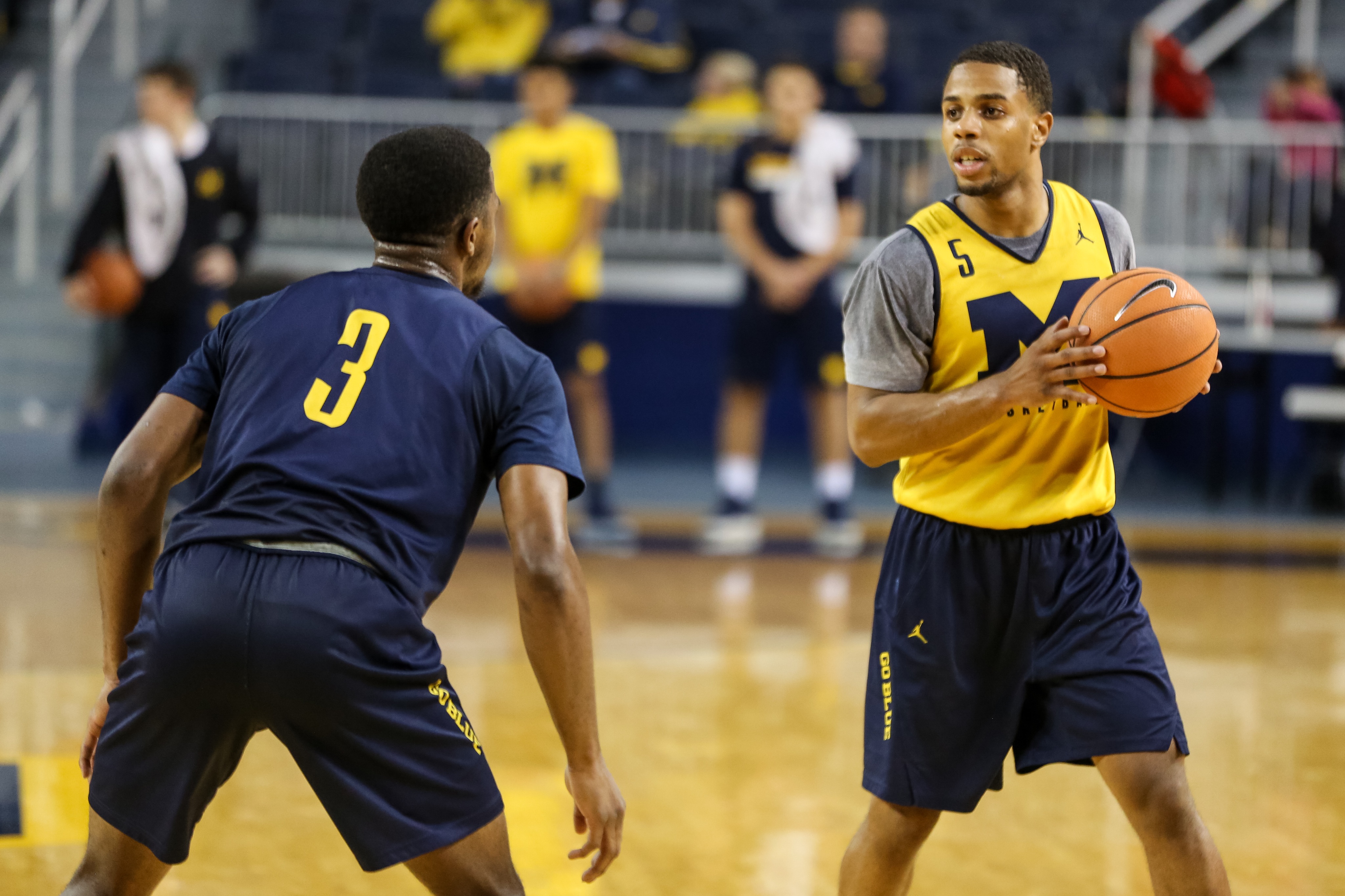 Michigan offered the public its first glimpse at the 2017-18 team on a dark, rainy Tuesday night. John Beilein played emcee as Michigan practiced in front of a sizable crowd, going through drills before scrimmaging for 20 minutes

1. Simpson the leader in clubhouse?

As soon as Jaaron Simmons arrived in Ann Arbor, it was assumed that the fifth-year senior would take over as Michigan’s starting point guard. After all, as a graduate transfer, he offered a combination of production and experience that neither Zavier Simpson nor Eli Brooks could.

That was why it was particularly interesting to see Simpson running with the four other presumed starters on the blue team — Muhammad-Ali Abdur-Rahkman, Charles Matthews, Duncan Robinson and Moritz Wagner — in both drills and scrimmages. Beilein was quick to say that the teams “weren’t an indication of who our starters are,” so you can take it as you will. Either way, the opportunity is there for Simpson to earn the job: just last week, Beilein told Jon Rothstein of FanRag Sports that any of Michigan’s three point guards could start.

From the open practice, it was easy to tell that Simpson’s defense remains an asset. At one point, Beilein said he had 52 deflections in practices thus far, and he had several Tuesday night. He was aggressive on offense, too, looking to drive to the basket often. Those didn’t always end well — but Simpson was assertive, and that was a different sight compared to last year.

Eli Brooks, Isaiah Livers and Jordan Poole all earned reputations as highly-skilled offensive players. Of course, there’s always a transition period for freshmen as they adapt to the speed and difference in athleticism at the collegiate level. Yet if Tuesday’s scrimmage told us anything, it’s that the trio will look for their own shot. Brooks had several nice finishes at the rim and hit a three; Livers and Poole had more mixed results but both were still aggressive.

Michigan doesn’t need any of them to immediately be a primary option on offense. But all three still have a chance to contribute, with Brooks fighting for the point guard spot, plenty of minutes available for Poole on the wing and Livers hoping to unseat Duncan Robinson at the ‘4.’

3. Simmons fitting in well so far

It’s not always easy to bring in transfers, especially with the level of difficulty in Beilein’s system. Yet Simmons was poised and in control during the scrimmage. He’s not the biggest point guard, but he made plays throughout.

He had one particularly nice-looking finish at the rim when he drove right and used his left hand to prevent Robinson from affecting the shot. His three-point shot does have a small hitch, and when he increased his attempts last year, his shooting percentage dipped noticeably. But, with his pedigree, he’ll most likely be a capable floor general this year.

On Tuesday, though, it was the other sophomore center that caught my eye: Austin Davis.

Davis displayed a smooth stroke through drills. At one point, he hit five consecutive 3-pointers before showing nice touch from the elbows and free-throw line.

From Beilein’s previous comments, we already know that Davis is Michigan’s best “catch-and-finish” threat and has slimmed down significantly. Whether his jumper is utilized in real-game situations — he shot from distance just once in the scrimmage — remains to be seen. But at the very least, he’s been working to improve his shot.

Beilein concluded the practice with everyone’s favorite event: a three-point shooting competition. Robinson was one entrant; the other choice was Wagner.

Before Wagner started, Beilein commented that he and Robinson were “two of the better three-point shooters in the country.”

As the crowd cheered them on, both players lit it up. Wagner had one stretch where he made six consecutive threes before finishing with 18-of 25 — a number that Beilein said “we’ll take.”

Robinson went after, and after a rough start, he caught fire quickly. He hit 10 in a row. Then he hit eight in a row. His last shot would’ve beaten Wagner, but it clanked the rim and fell off, leaving both to settle with a tie. With Michigan’s two leading 3-point shooters moving on in the offseason, Robinson and Wagner will be expected to shoot from deep plenty this year.