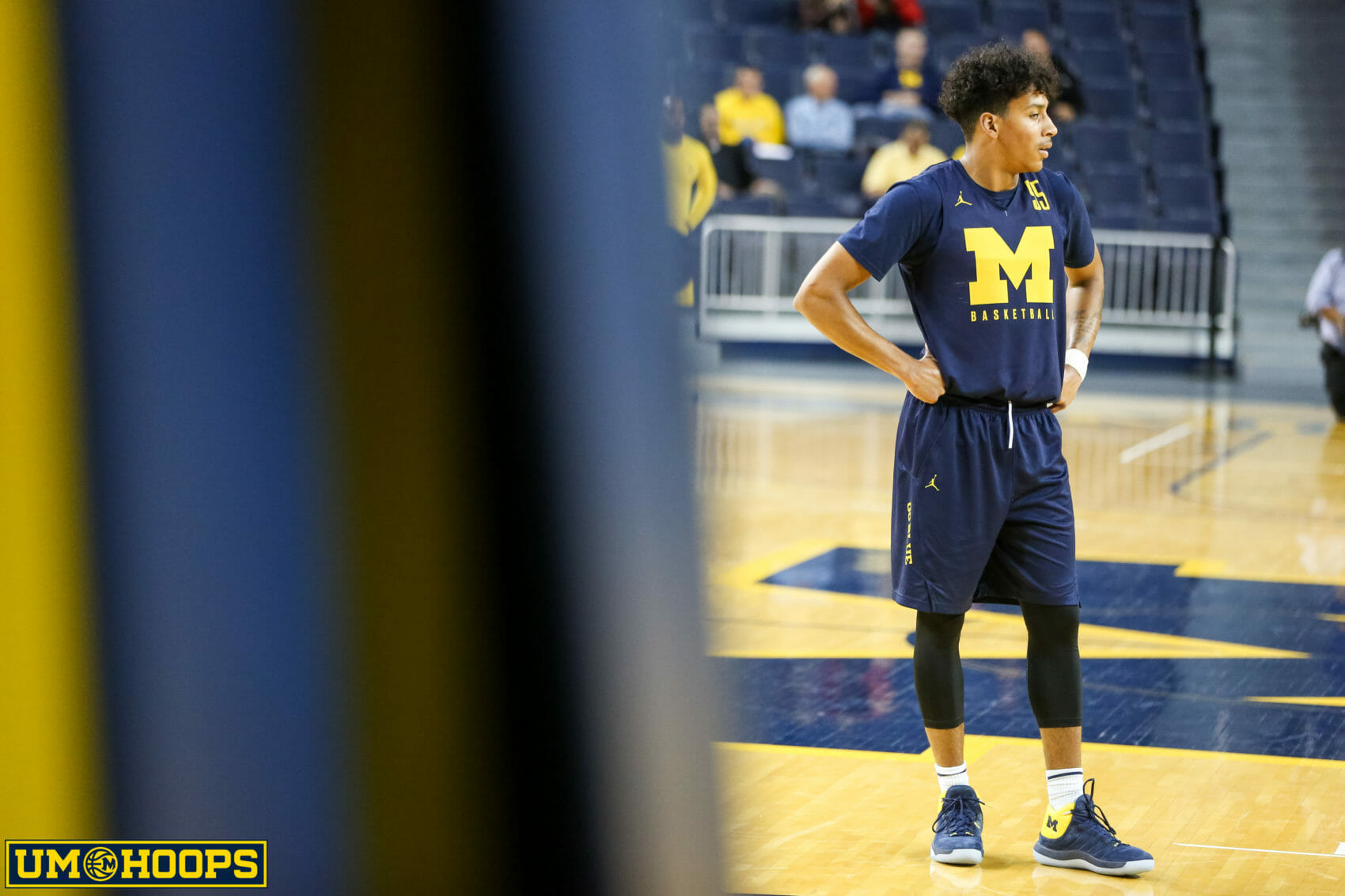 “I think he’s shooting 50 percent from two, that’s really good for a guard. And threes, he’s shooting high percentages at both spots. He’s shown a real unique ability to catch on very quickly to many things.”

Jaaron Simmons is an experienced veteran. Zavier Simpson is a returning contributor.

“We have a scrimmage coming up Sunday — I have no idea who I’m gonna start,” Beilein said. “It could be any three of those. Any one of those three. That is the honest truth.”

“I know if I did the right things, I could put myself in a spot where I play a decent amount of minutes,” Brooks said. “… Competition isn’t what I’m afraid of. I feel confident on the floor. The guys feel confident in me, so that gives me even more confidence.”

So far, it appears Brooks’ offensive game has helped put him in the conversation. As a recruit, he was known as an offensive dynamo, scoring over 2,000 points in his high school career as a quick, penetrating guard with a capable outside shot.

Onlookers got a small sample of that skillset from Tuesday night’s scrimmage. Brooks hit an open 3-pointer. He drove to the basket and finished in tough spots. All in all, he looked like the player he was scouted as.

“Yeah, he’s been pretty good at (finishing),” Beilein said. “I think he’s shooting 50 percent from two, that’s really good for a guard. And threes, he’s shooting high percentages at both spots. He’s shown a real unique ability to catch on very quickly to many things. … We hope he doesn’t flatline.”

His teammates have noticed Brooks’ impact, as well. Jordan Poole called Brooks a shot-maker who has been “knock-down” and can get to the basket. Simpson said Brooks has been “really poised” and finishes really well. Muhammad-Ali Abdur-Rahkman has liked the freshman’s knowledge of the game and said Brooks is a “really good” shooter with “great” court vision.

Brooks, meanwhile, openly admitted that he thinks there are some “flaws” in his game. When asked where he could improve, he mentioned being less hesitant to find his own shot.

His position coach has seen the same thing.

It hasn’t always just smooth sailing thus far. Brooks said he’s still learning the nuances of defense, such as ball screen coverages, and has been called out several times in film study. In one of his first few practices, he was dunked on by Charles Matthews.

Yet it’s evident that Brooks is still ahead of the curve.

“Eli’s probably another one of our high-IQ (players),” Haynes said on Wednesday. “Last night, he showed he could come in and make big shots. He’s one of our most consistent guys right now, being at a young age, a freshman.

“You never know what’s going to happen here over the next few days or over the next few weeks or months, but he’s one of those guys you can even see starting one day — who knows? But he’s been doing a great job right now.”