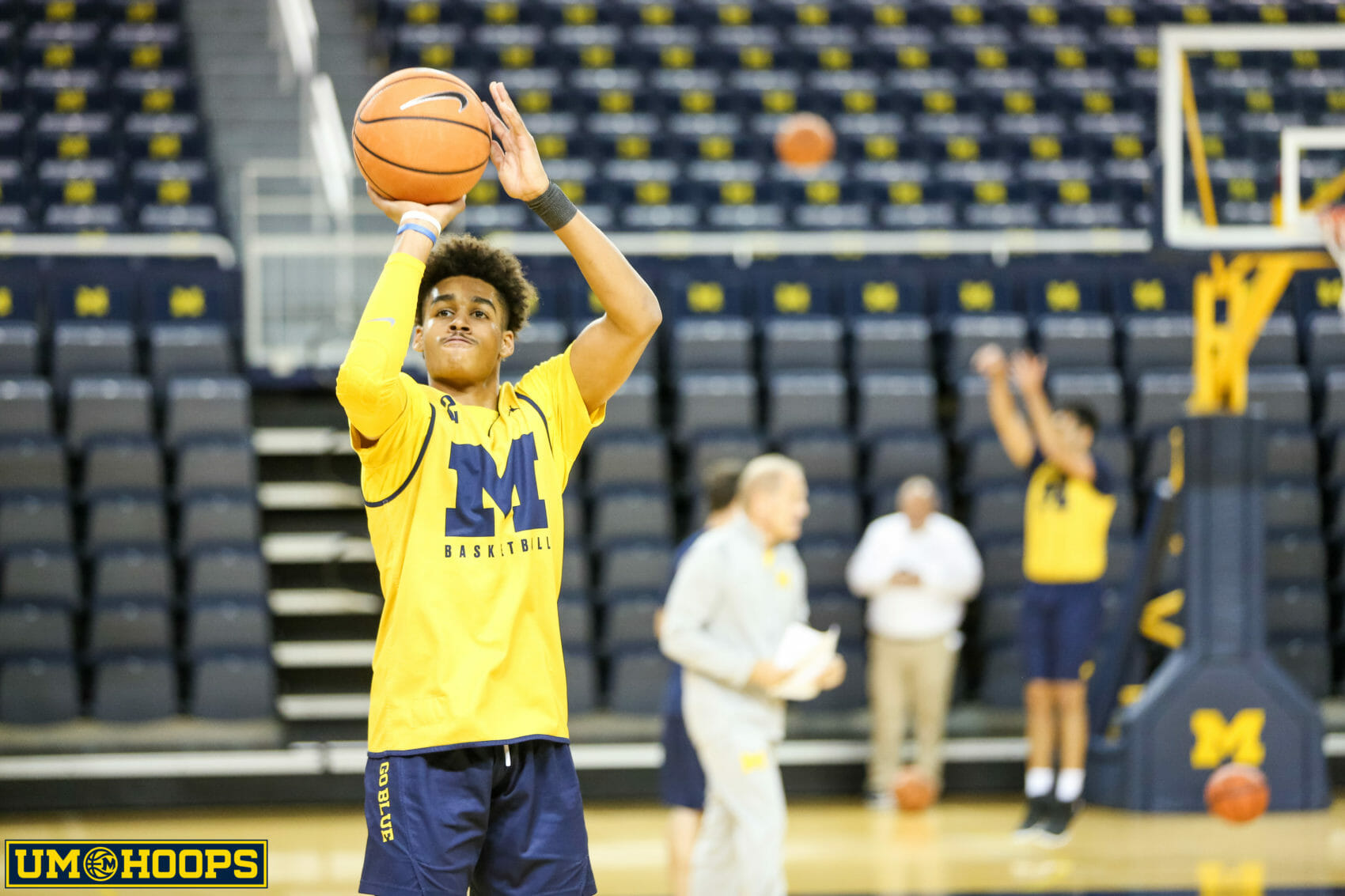 “You might get that opportunity with 22 seconds left on the shot clock in college and that won’t be a great shot because it’s too early. So being able to know when, at what time, just read the plays, how the defenders are coming if they’re late on help, that will usually determine what a great shot is.”

Shooters shoot. And Jordan Poole is certainly a shooter.

That was evident from his body of work on the AAU circuit and in high school. It was also on display in a clip of highlights the Michigan basketball team tweeted out Wednesday night. In the video, Poole knocked down jumpers in a variety of ways — coming around a high-ball screen, off the dribble, out of the high post and, to cap things off, a simple catch-and-shoot from the edge of the halfcourt logo.

Poole was widely recognized as one of the best shooters in his class. Luckily for him, the Wolverines are in need of that skill. Michigan lost 54 percent of its made 3-pointers last year, and its two highest-volume shooters in Derrick Walton Jr. and Zak Irvin.

The Wolverines do bring back Duncan Robinson and Moritz Wagner. But aside from Muhammad-Ali Abdur-Rahkman, returning players at the ‘2’ and ‘3’ are mostly unestablished, and some — like Charles Matthews — haven’t shot the ball consistently throughout their careers.

And Poole is certainly aware of his situation.

“Just spreading the floor,” Poole said at last week’s media day when asked about his role this year. “Obviously out here trying to make the right plays. (If) open, knock your shot down. Be a playmaker when given the opportunity. Just spacing the floor, especially taking some of the leeway off Duncan or Muhammad or Charles.”

Like all freshmen, Poole’s transition to college wasn’t seamless. Because of a year spent at the La Lumiere School, he’s already dealt with a lot of the difficulties freshmen face in their first year away from home. But his time at La Lumiere could only prepare him so much for the collegiate game — especially the more nuanced aspects, such as taking the right shots at the right time.

“In high school, it’s just like shot-shot-shot, just run,” Poole said. “You don’t really think about ill-advised shots or things like that.

“Whenever you’re open, you’re shooting — especially if the defender has his hands down as you’re going up. You might get that opportunity with 22 seconds left on the shot clock in college and that won’t be a great shot because it’s too early. So being able to know when, at what time, just read the plays, how the defenders are coming if they’re late on help, that will usually determine what a great shot is.”

Thanks to new resources, Poole said he felt like he improved over the first couple weeks of practice. He’s already spent time breaking down film of each and every shot he takes.

Of course, whether or not Poole finds time on the floor won’t solely depend on how far he’s come along with his decision-making. He’s been working on other facets of his game as well — such as playing help defense and getting in position for charges. And if he makes enough progress in those areas, it wouldn’t be a surprise to see him on the floor doing what he does best: shooting the ball.