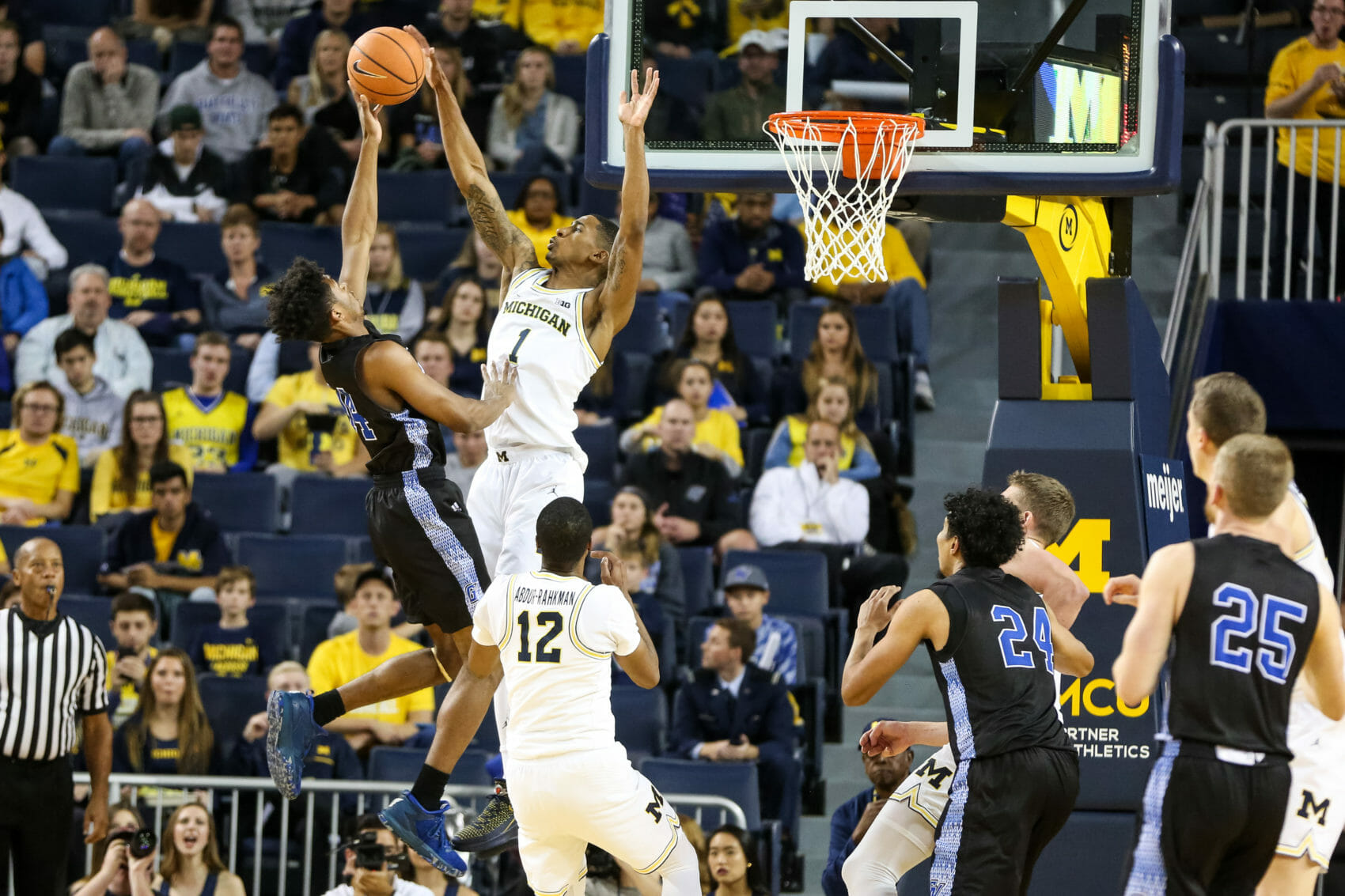 We got our first glimpse of in-game action from the Wolverines on Friday night, as they beat Grand Valley State 82-50 in an exhibition matchup. Here are five takeaways

The junior transfer from Kentucky didn’t just distinguish himself on Friday, he was the Wolverines’ best player. In 29 minutes of action, Matthews was 9 of 14 from the field for a team-high 23 points. Those 23 points were more than double his career-high as a Wildcat and it was clear John Beilein views him as a primary option.

After two isolation looks early, most of Matthews’ points came either in transition or the regular flow of the offense. He took advantage of Grand Valley State’s 2-3 zone by drifting to the elbow for an open midranger numerous times. There was also some nice chemistry with Moe Wagner.

That was clear as early as the first possession of the game, when Matthews hit his only 3 off a Wagner dribble handoff.

“I loved when he hit his first three,” said Beilein afterward. “We see it in practice, we watch it. But the fact that he wasn’t afraid to take it — and he went and made it. I don’t know why it is, to me, not that we haven’t had good players begin their season and miss shots. Good players have done that. But it seems to me like — the Hardaways and the Stauskas,’ the guys I’ve had — whatever it is, they come out and from the very time they touch it they’re comfortable.

This was, of course, an exhibition game against a Division II school, but for someone getting his first minutes of in-game action with the team, Matthews had solid chemistry with the starters. As that builds throughout the year, he could become a serious weapon.

Zavier Simpson is Michigan’s starting point guard, but the battle isn’t over

That doesn’t mean he has a lock on the job for the season. But it means he has the job right now. How long that lasts is up to Simpson as much as anybody.

None of Michigan’s point guards distinguished themselves on Friday and the minutes distribution was fairly even. Simpson played 18 minutes, Jaaron Simmons played 15 and Eli Brooks played 15 (with probably 8 to 10 coming off the ball).

“I think so,” Beilein responded when asked if the point guard competition was ongoing. “Each (point guard) gives us different things whether it is man or zone. I just wanted to give everyone a chance.”

We didn’t see much from Simpson in terms of shooting or finishing, two questions that still linger about his game. He took just one three-pointer and missed it. He was also blocked at the rim during the first half after converting one earlier on with a helter-skelter finish.

As for Simmons, he scored just five points on 2  of 4 shooting from the field, equaling Simpson with three assists.

Rebounding may be an issue

If we’re nitpicking — really nitpicking — rebounding was the main issue for the Wolverines on Friday. They allowed the Lakers 15 offensive rebounds, three more than Michigan pulled down themselves.

“We have a lot of — ticklers we call them. They come in and touch their guy and then they go for the rebound and that guy will spin out,” Beilein said. “You gotta go make physical contact with him.

“So it’s a great teaching point for us to say, ‘This is where we’re at,’ and now continue to emphasize it.”

This could especially be an issue in Michigan’s starting lineup, where Moe Wagner is the only traditional big. Rebounding issues have plagued Wagner in the past, but he did grab 10 on Friday. The Wolverines ranked just 212th in defensive rebounding last season and have to replace several of their best options n the glass. The 11 second-chance points the Wolverines allowed on Friday could be a precursor to a season-long trend.

It’s clear the team still has a lot of work to do with the season-opener a week away. And Beilein knows it.

“We’ll have like a minicamp of two days,” he said. “We will really get after it, every minute that we can spend, it’ll probably be four hours of just getting ready for what’s in front of us. Four hours each day.

“Take a day off Wednesday, and then we’re into it. Then it’s like, we never have two days to just practice and get better, almost until we go home for Christmas. ”

This training camp of sorts could have big ramifications for Michigan over the opening weeks of the season. Jaaron Simmons is still learning the offense and this will be his last chance to master it before the season starts. The same goes for every freshman and — despite how well he played Friday — Charles Matthews.

Nobody expects that any of them will have the offense down pat by next Saturday’s tilt against North Florida. However, these eight hours of practice could provide a big step in getting there.

The big men can pass

Michigan’s big men were in rhythm tonight and it wasn’t all in the box score.

This was most evident with Jon Teske, who had three assists on the night. Just minutes after coming in he found Muhammad-Ali Abdur-Rahkman out of the post for a three. Teske played just 12 minutes, but flashed good passing ability whenever on the floor. He wasn’t the only big to do so either.

“That wasn’t the forte of some of the centers we’ve had (in the past),” said Beilein. “I like the way we’re throwing it to the big guys and cutting — I think we got a couple passes.”

Teske wasn’t the only center to move the ball effectively. Moe Wagner had just one assist, but Beilein pointed out he could have easily had more.

The passing the Wolverines got from the big positions allowed them to attack Grand Valley State’s 2-3 zone all night. Charles Matthews was a consistent beneficiary, nailing a couple elbow jumpers. Eli Brooks got one as well off a catch-and-shoot opportunity.

Everything here comes with the stipulation that the Lakers are a Division II squad, not representative of what Michigan will face in the coming weeks, let alone the Big Ten. But beating 2-3 zones will get a lot easier if the bigs pass like they did tonight.