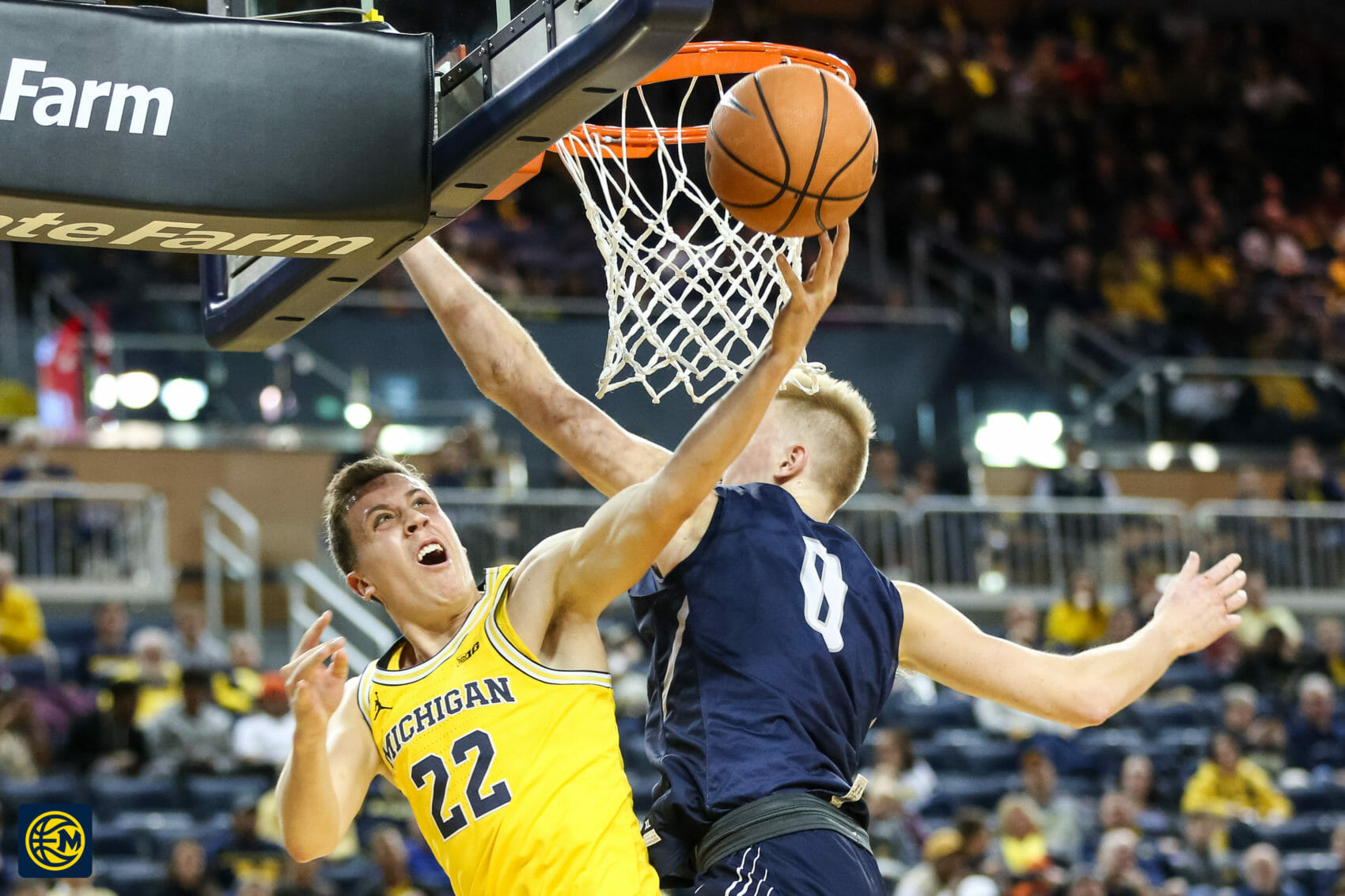 The Wolverines beat North Florida in their 86-66 season opener, a game which was closer than expected for 30 minutes. Here are five takeaways.

Charles Matthews will be a go-to scorer

Matthews took 19 shots for Michigan on Saturday, 13 of which came in the first half. Early in the game, he attacked North Florida’s zone defense nonstop with jumpers around the elbow. The problem was, he didn’t make many.

In that first half, he shot a pedestrian 5-of-13 from the field, with five of the misses coming from mid-range. It seemed that nerves were an issue as well, particularly when Matthews missed a transition dunk off a Duncan Robinson lob.

“He took a couple tough ones,” John Beilein said. “I’m pretty fundamental with — they throw you an ally-oop, just make it a two-hand dunk or lay-in. We want him to be aggressive. At the same time, he’s trying to figure out — he hasn’t been in these situations in college, since high school now. It’s, what, one, two, three — the third year. So he’s starting to learn what a good shot and a bad shot is.”

Matthews did settle down in the second half. When Michigan was in the midst of breaking the game open, he picked up a transition layup, elbow jumper, and corner 3 — his only made shot from beyond the arc all night — all in a two-minute span.

Matthews’ lack of attempts from outside is somewhat notable given Beilein’s 3-point heavy system. This was also evident in Michigan’s exhibition against Grand Valley State. However, Matthews attributed his shot distribution to the zone defense the Ospreys played — one that has historically limited three-point attempts.

During the five-minute stretch that decided the game, when the Wolverines went from hanging onto a one-point lead to blowing out the Ospreys by 20, no one stood out more than Robinson.

The senior forward hit a transition 3 to put Michigan up six with about eight minutes to go. His best sequence, however, came about 30 seconds later. Robinson forced a miss out of North Florida guard J.T. Escobar, grabbed the rebound, and flew coast to coast for a layup.

“First off, get stops. You know, you can’t get out in transition if you don’t get stops, so get stops, gang rebound and get out,” Robinson said. “That was kind of the big emphasis at halftime and I thought we did a pretty good job and that was one of the things that sparked our run.”

The fifth-year senior scored 21 points on 13 shots including and was Michigan’s most-efficient offensive weapon. He also brought down seven boards, second only to Moritz Wagner on the night.

“I think he’s in elite shape right now, of just living right,” Beilein said. “He lifted, but is not as heavy as last year. We made a concerted effort not to bulk him up and be a power man. That he was gonna be a three-man playing three, two, and the four-man for us.”

Robinson’s rebounding is arguably a bigger deal than his offensive output. With Wagner the only true big man on the court most of the time, another capable rebounder emerging would be a huge deal for Michigan. This was just one game, but certainly something to keep an eye on going forward.

Point guard minutes are still up for grabs

Most Michigan fans thought Simmons would emerge as the starter among a group that also includes Zavier Simpson and freshman Eli Brooks. That hasn’t happened yet, and Beilein doesn’t know how his point guard rotation will play out, offering a flat “no” when asked if any point guard has separated himself.

“That’s the one thing I’m uncomfortable (with) right now is I’d like to have that into a two-man rotation (at point guard) pretty soon,” said Beilein. “That’s gonna be hard to do, but I think two will rise to the top and you can have a leader when he emerges.”

Simpson tallied nine assists in the win and had Beilein’s endorsement as the best defender of the bunch, but the head coach wants him to be more aggressive offensively.

Until the last 10 minutes, there was a real chance of North Florida pulling the upset. Not only was the score close, but Michigan was struggling offensively.

“We came out a little surprised and not ready to play,” said Moe Wagner. “But we’re also a very young team. I looked out there and I was like, ‘Wow, these guys have never been out there before.’ And we all have new roles, so it’s supposed to be like that and it’s a good wake-up call.”

For the first 30 minutes of the contest, the Wolverines struggled to score in the halfcourt against the North Florida zone. They were scoring just .9 points per possession when the Ospreys took a 47-46 lead with 12:16 to play.

That was right before the Wolverines put the game away, scoring 40 points in the final 24 possessions of play, but it took a long time to find that rhythm.

“I expect adversity early,” Beilein said. “Then I expect to grow from it. Now, it might now happen. But we’re gonna be ready for everything. We’re gonna have this mindset right now, that we’re gonna go this year, this way, but we got a lot of work to do.”

Against a better team, the Wolverines might have been in more trouble given the offensive struggles. Next up, the Wolverines play a pair of guarantee games — Central Michigan on Monday and Southern Miss on Thursday — but tougher challenges await in Maui.

Wagner put up a career-high 12 rebounds on Saturday and it barely felt noteworthy. That’s in part because he’s reached the point in his career where an 18 and 12 stat line can feel routine.

Wagner is still learning how to be the guy for Michigna, but the Wolverines made a concerted effort to feed him the ball down low in the second half.  He consistently got strong position inside against the Ospreys’ bigs and finished with an array of turnaround hooks.

“Last year I had a game like that against Maryland, where the first half wasn’t the half I wanted to have and your teammates come up to you and say, ‘We need you to be a little more aggressive,'” Wagner said. “That’s your responsibility, so, you gotta do it a little bit and that’s what I tried to do.”

Though he finished without an assist, that was in large part because Isaiah Livers missed a layup off a backdoor cut when Wagner found him early in the game. Wagner isn’t a natural at finding cutters from the post, but he’ll take what’s there. The lack of assists was as much about a lack of off-ball movement when Wagner was isolated as Wagner himself.