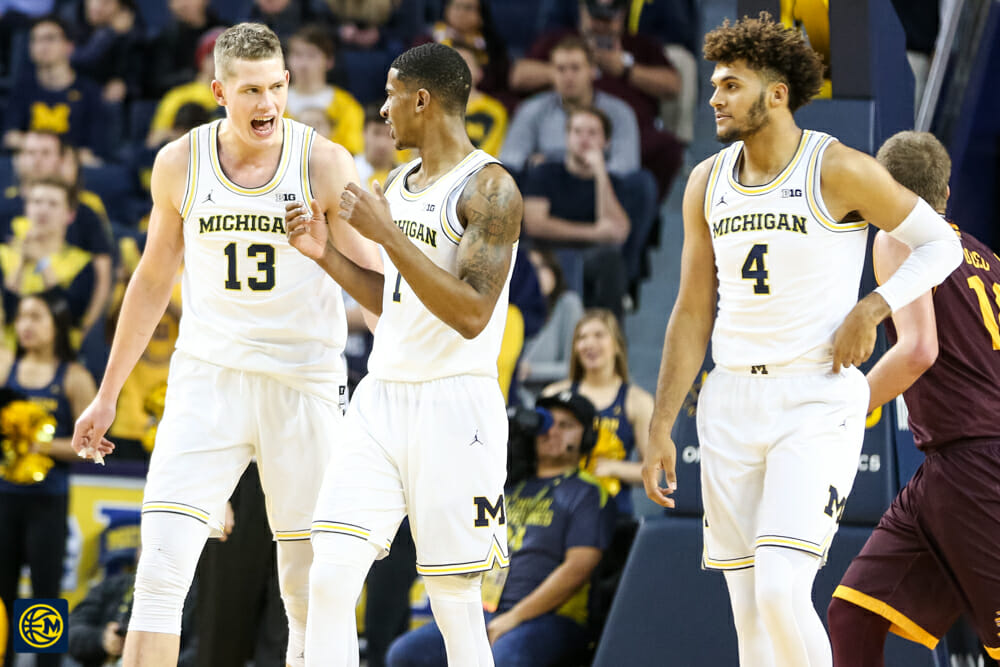 Michigan knocked off Central Michigan, 72-65, on Monday night, but once again it needed to erase a narrow lead midway through the second half.

After spending an off-season wondering what Michigan would look like in 2017-18, the first two games of the season have provided more questions than answers.

Michigan knocked off Central Michigan, 72-65, on Monday night, but once again it needed to erase a narrow lead midway through the second half.

Through 80 minutes, we still haven’t seen Michigan’s offense executed against man-to-man defense. We still don’t know how the point guard position is going to shake out. We still don’t know who is the go-to scorer in crunch time. Instead we have a smattering of data points against zone defense looks that Michigan is unlikely to see much of all year.

Michigan might be flirting with disaster by finding itself trapped in narrow games against mid-major opponents, but the good news is that it has figured out how to maneuver its way out down the stretch.  The only real way to answer the questions facing this team is to play things out on the court.

A few early tests have provided at least a glimpse of what Michigan might look like down the road, and should make things a bit easier at the first sign of adversity in Maui next week. 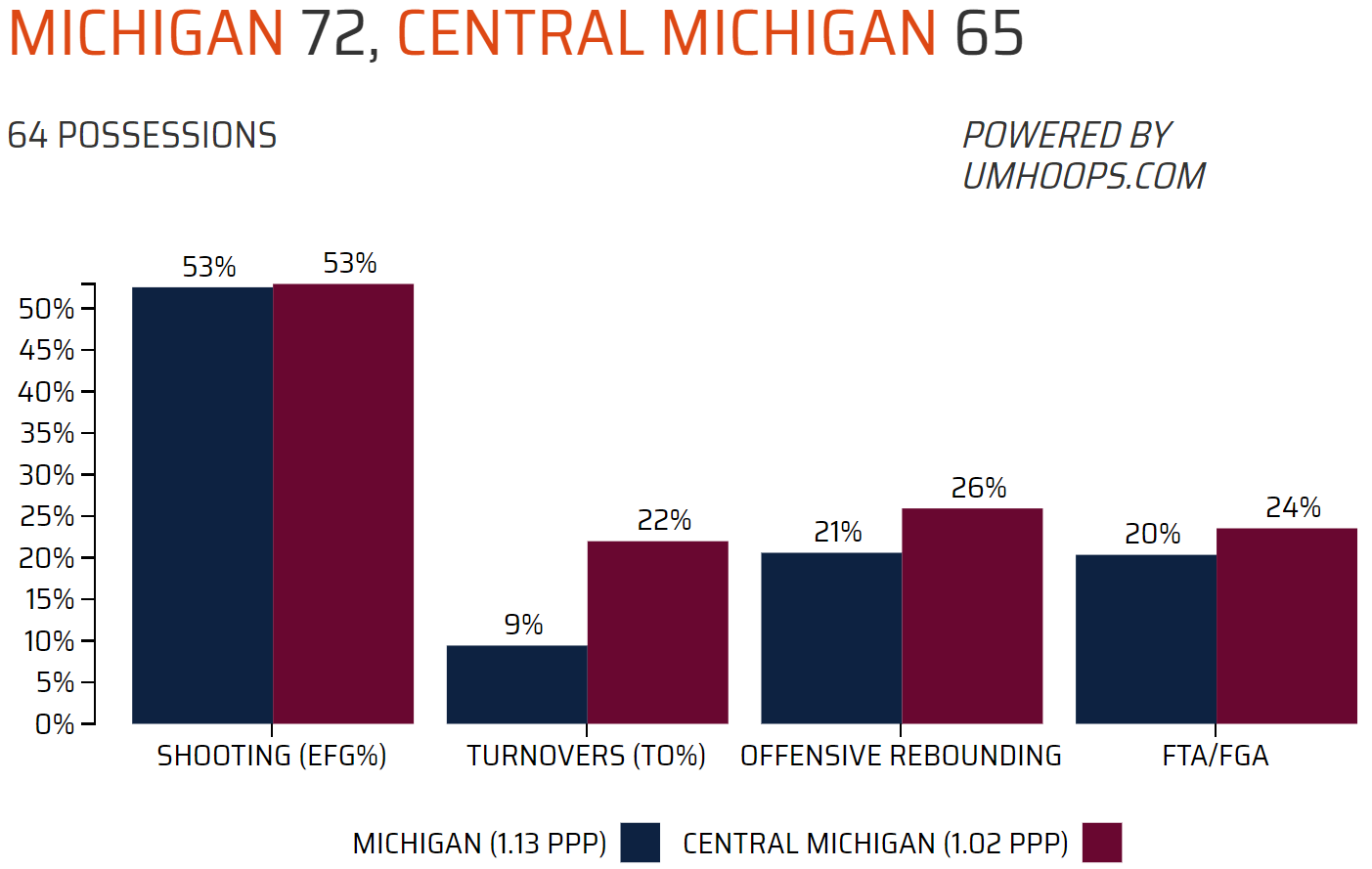 Central Michigan played a token three-quarter court press that would drop back into a zone and, as we saw in the opener, Michigan just couldn’t figure things out consistently in the halfcourt. The Wolverines were an elite half court offense last year and had the No. 10 offense in the country against zone defenses, but this year is a different team that just doesn’t have the same ability right now.

To their credit, the Wolverines did manage 1.13 points per possession on the night despite shooting 10-of-34 (29 percent) from three-point range. 64 percent two-point shooting helped and Michigan’s best moments offensively came in transition when it could string together stops and get open looks.

I’m pretty confident in saying that zone defense won’t be some crippling Achilles’ heel for any Beilein-coached team. If this group can’t figure out zone defenses by December, it probably isn’t going to be any better against man-to-man defenses either. Instead, these early zone looks have just exaggerated some of the issues facing this team which isn’t sure who should shoot now or drive then and just how all of the pieces are going to work together.

In game one, it was Charles Matthews, Moritz Wagner and Duncan Robinson carrying the offense. Tonight, Muhammad-Ali Abdur-Rahkman was the most aggressive player after coasting through the opener. Who is going to be ‘the guy’ in the offense? Right now it is still anyone’s guess.

Michigan’s defense held Central Michigan to 1.02 points per possession despite the Chips making 42 percent of their threes. Once again, turnovers were Michigan’s saving grace on the defensive end of the floor. The Chippewas gave the ball away once every four trips down the court and Michigan turned those 14 giveaways into 15 points.

It’s still early in the season, but we started to see the true rotation is in the second half. Both Eli Brooks and Ibi Watson played in the first half, but didn’t see the floor in the second when the game was close. That means that Jaaron Simmons, Isaiah Livers and Jon Teske appear to be the 6, 7 and 8 men in the rotation as things stand.

The most relieving news for Michigan might be that Southern Miss played 100% man-to-man in its opener and only zoned up on 10% of its defensive possessions a season ago. The Wolverines host the Golden Eagles on Thursday night in their final pre-Maui Invitational tune-up and should relish the opportunity to play some of their base offense against a man-to-man look. 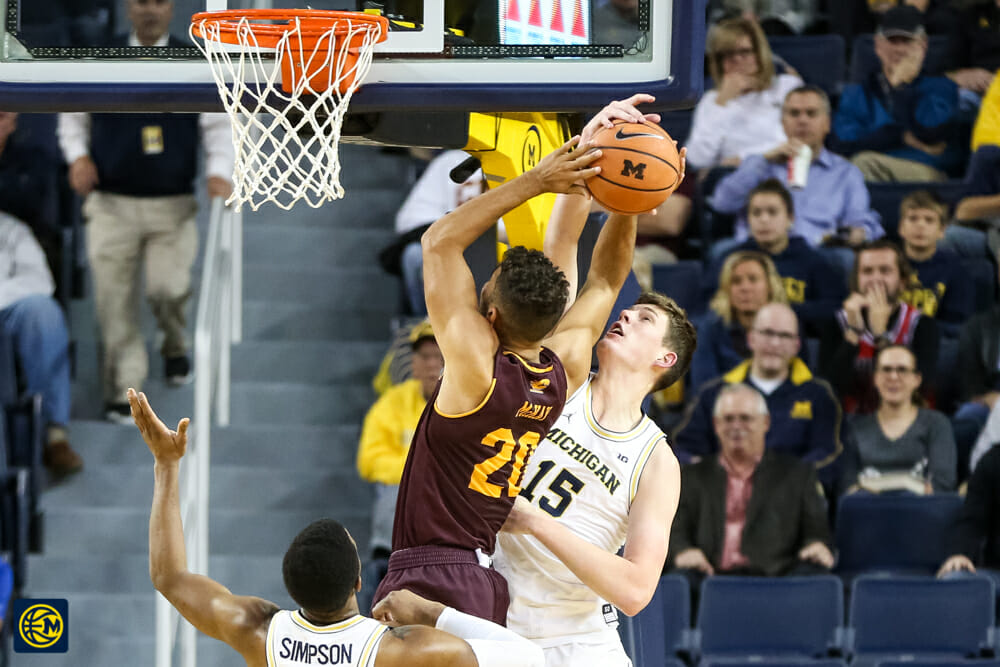 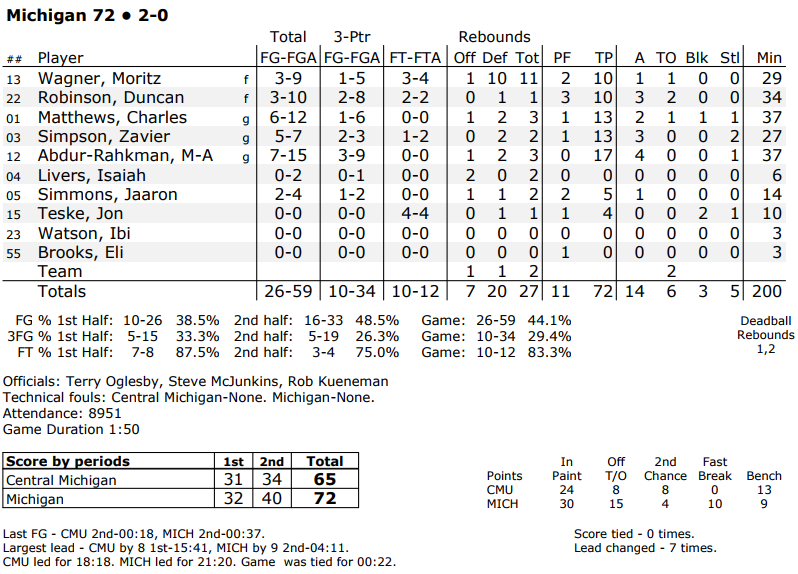