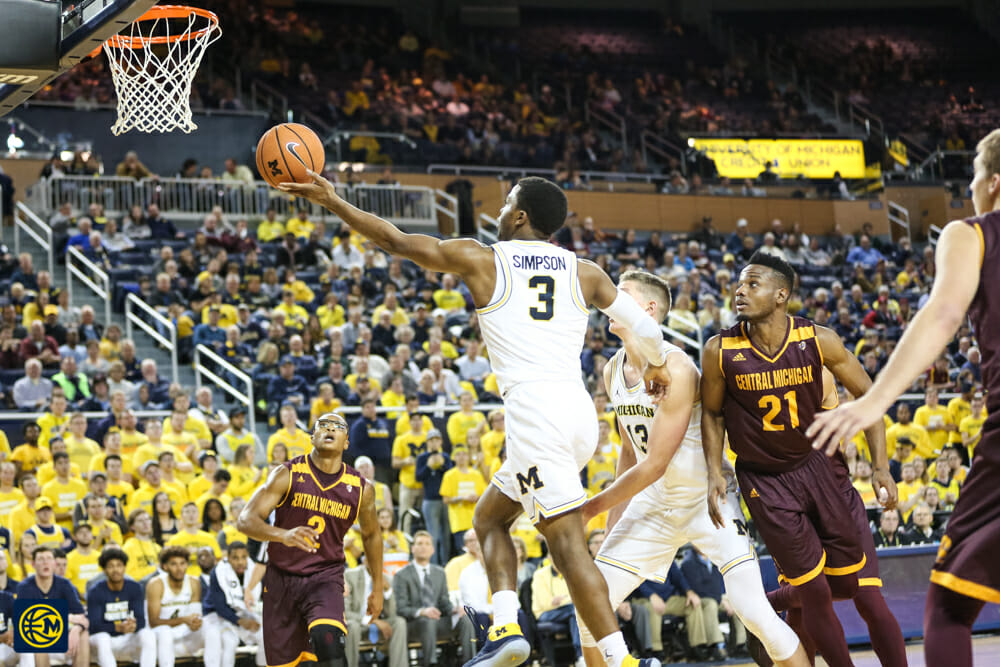 Here are five takeaways from the Wolverines’ 72-65 win over Central Michigan on Monday night.

It wasn’t a clean game.

Charles Matthews was 1-of-6 from deep. Moe Wagner, slightly hobbled in the second half by a twisted ankle, shot 3-of-9 from the field. Duncan Robinson missed clean look after clean look — and missed most of them, finishing 2-of-8 from the 3-point line.

Michigan won anyway. An incremental step forward on a rather ordinary day in November — but hey, isn’t that we’re used to from an early-season John Beilein team?

Here are five takeaways from the Wolverines’ 72-65 win over Central Michigan on Monday night.

Michigan got off to yet another slow start after trailing North Florida as late as the second half. The Chippewas held a second-half lead, too, thanks to some hot first-half shooting that didn’t seem replicable. The Wolverines eventually heated up, hit a couple crucial 3s, and pulled away.

Beilein was pleased with the mentality of his team entering the game. He thought Michigan “warmed up really slow” in the opener. It didn’t make much of a difference, though, as the Wolverines struggled to knock down shots against yet another zone look.

According to Muhammad-Ali Abdur-Rahkman, Central Michigan had more of a matchup zone and said Beilein called more “man plays” to beat the look.

Michigan, of course, is notorious for torching zones. Natural progression throughout the season, along with more consistent shooting, should yield that result. Couple that with the Chippewas’ (and North Florida’s) hot shooting from deep, and the early-season struggles don’t appear to be a cause for concern.

Michigan’s starting point guard had yet another solid game. Simpson knocked down his first five shots — including two 3s — and finished with 13 points, 3 assists, 2 rebounds and 2 steals.

The stat that stood out to Beilein, though, was 0 turnovers — especially because, according to Beilein, Central Michigan forced 28 turnovers against a “really good Division II team” in their previous match-up.

“Another good day for Zavier. It was another good day,” Beilein said. “… Zavier’s really gradually getting better and feeling more comfortable, and defensively, he’s really key for us. He’s not making a lot of the silly fouls that he used to make, and still playing aggressively.”

Simpson has racked up 12 assists and 4 steals through two games and played a career high 27 minutes on Monday night.

Of course, Michigan isn’t usually known to be a defensive powerhouse. The Wolverines still have a ways to go before reaching that distinction, too. But Monday night’s performance was still certainly encouraging — especially considering the success Michigan had turning good defense into quality transition opportunities.

There was no better example than early in the second half. Solid post defense from Moritz Wagner led to a fast break — which ended with an open Robinson 3 that found nothing but net.

Michigan tallied five steals, too, and generated 15 points off turnovers in total.

According to Abdur-Rahkman, Michigan has several drills in practice where it practices converting stops into transition offense. The work seems to have paid off thus far.

“Yeah, we’ve been trying to do that from the beginning,” Abdur-Rahkman said. “We’ve just got to continue to get stops in order for us to get out and run, and I think we’re making that more of an emphasis now.”

Turning stops into offense was even more important against the Chips, considering how uncomfortable Michigan looked against the token pressure and zone defense. 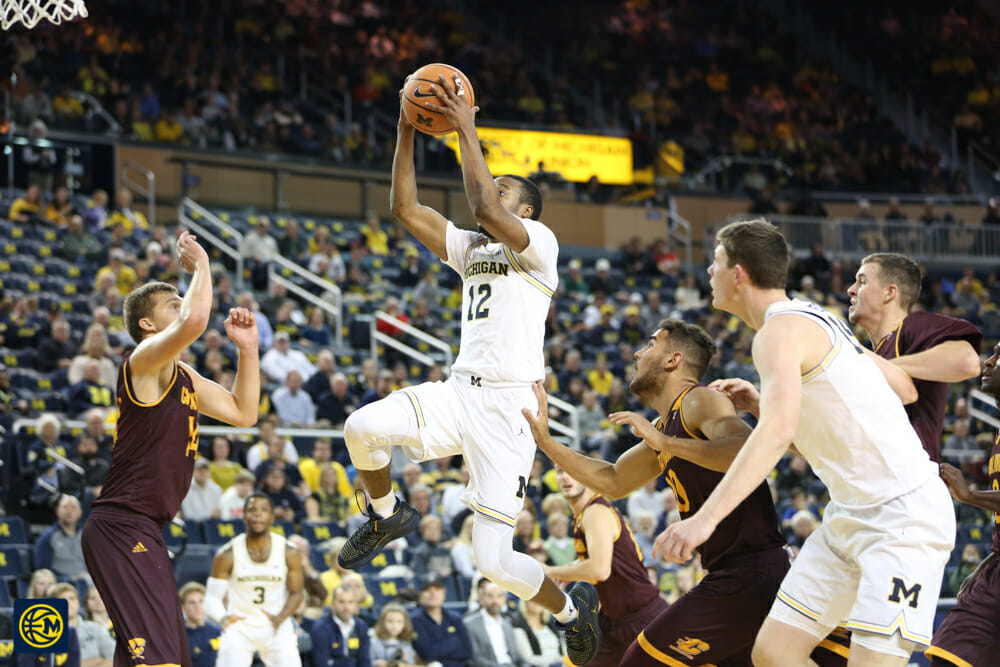 Abdur-Rahkman fills it up

Against North Florida, Michigan’s captain and starting ‘2’ took only one shot in the first half — and it didn’t come until after the under-4 minute timeout.

Abdur-Rahkman took a 3 on his team’s second offensive possession of the game, rattling it in for the first three of his team-leading 17 points. He shot 7-of-15 on the night (3-of-9 from 3) and was generally more aggressive than in the season opener — best illustrated by a personal 8-0 run between halftime.

And that’s exactly what John Beilein thinks this team needs.

“He’s got to hunt and get to the basket, land on two (feet),” Beilein said. “… He was very basic with what he did today. He easily could have had many more points. His last 3 was right in. So I love the way he’s shooting the ball, and I love the way he’s looking to shoot.”

“That was the best he’s ever played,” Beilein said. “He had a couple of days in practice where he was just out there. He’s got to play with that type of intensity.”

Teske looked comfortable on offense — perhaps even too comfortable, some would say — and was rewarded for it, getting fouled on two jumpers and draining all four free throws. But his influence was felt the most on defense. Teske affected numerous shots, finishing with two blocks, and his ability to defend switched screens impressed Beilein.

“They were just going to take our big one-on-one because they’re playing small half the game,” Beilein explained. “(We said,) ‘Jon, you’ve got to guard him. We’ll help you, but you’ve got to stay in front.’ He did a wonderful job.”

Michigan probably doesn’t want to see Wagner go out for extended time, especially once it gets into the heart of its schedule. But finding a backup ‘5’ is still crucial, and Teske’s development took another step forward Monday night.