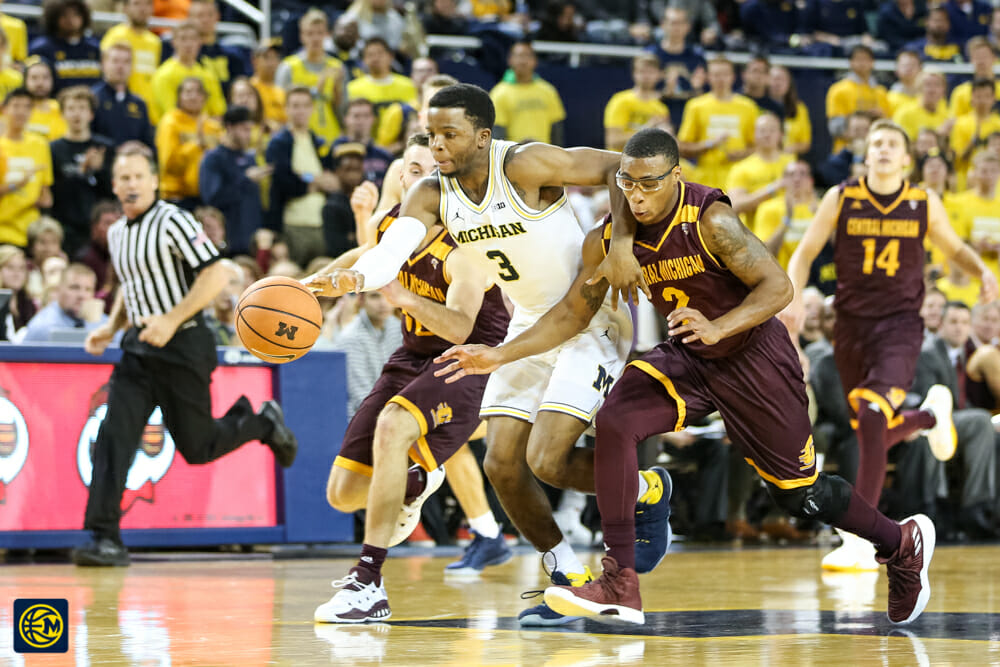 Michigan’s defense wasn’t perfect, but made plays when it counted against Central Michigan.

On the first play of Michigan’s victory over Central Michigan, the Chippewas ran a pick-and-roll with Cecil Williams and Luke Meyer.

Moritz Wagner hedged the ball screen and never recovered and when Meyer rolled to the hoop, nobody rotated to help. Williams found him for an easy layup.

Defensive frustrations were the story of the first half as Michigan was forced to overcome another lackluster beginning. Even with Central Michigan shooting the lights out, finishing 10-of-24 from 3 on the game, Michigan’s defense wasn’t up to par in the early stages of the contest.

John Beilein chalked the Wolverines’ early struggles up to inexperience, saying he’s been focused on teaching the offense, which means that defense gets left behind.

“We’re teaching guys to pivot and pass and I’m just talking about the really fundamental things that so many people come in and do not have,” he said. “And as a result, we’re working on so many individual things. (Central Michigan’s) scheme was really messy. Like what they ran today was, I call it a Zorro, and they ran two in a row and really dragged the guy, we should have been able to drop. We haven’t even talked about that particular play or drawn it up in the huddle.”

As early as the first defensive play of the second half, however, things started to change. First, Zavier Simpson picked up a deflection, leading to a Central Michigan inbounds. The ball was given to Cecil Williams — guarded by Simpson — in the post. Moritz Wagner came over on a double-team and the two combined to force a turnover.

Michigan’s next couple defensive possessions were clinical: a Charles Matthews block leading to a transition layup from Muhammad-Ali Abdur-Rahkman and Simpson locking down his man off an inbounds play to force a miss. Throughout the second half, Simpson was a defensive force, picking up deflection after deflection and forcing miss after miss.

“Zavier’s really gradually getting better and feeling more comfortable, and defensively, he’s really key for us,” said Beilein. “He’s not making a lot of the silly fouls that he used to make, and still playing aggressively.”

Forcing turnovers has been the one thing that Michigan’s defense has done well through two games. The Wolverines forced giveaways on 27 percent of their opponents’ possessions. That has not only made up for the inability to closeout on three-point shooters, but also created some much-needed easy baskets on offense.

Even when Wagner went down with 8:48 to go in the game and the Wolverines hanging on to a five-point lead, the defense managed to stay afloat thanks to none other than Jon Teske.

The sophomore center was immediately tested at the rim and immediately passed, forcing a miss out of Luke Meyer. Next time down, he tipped a defensive rebound to Rakhman, leading to a Jaaron Simmons transition putback.

“That was the best he’s ever played,” Beilein said. “He had a couple of days in practice where he was just out there. He’s got to play with that type of intensity. We challenged him — we switch screens late. They were just going to take our big one-on-one because they’re playing small half the game. ‘Jon, you’ve got to guard him. We’ll help you, but you’ve got to stay in front.’ He did a wonderful job.”

Teske’s lateral movement has always been an under the radar strength, but this was one of the first times he’s shown it on the floor.

With Wagner back on the floor, the Chippewas forced him to defend the pick-and-roll in a similar fashion. Michigan switched a ball screen and Central Michigan’s Shawn Roundtree isolated onto Wagner. With just over a minute to go and Michigan up by nine, the Chippewas needed a score to keep the game alive. Wagner made sure that didn’t happen, forcing the miss and sealing the victory.