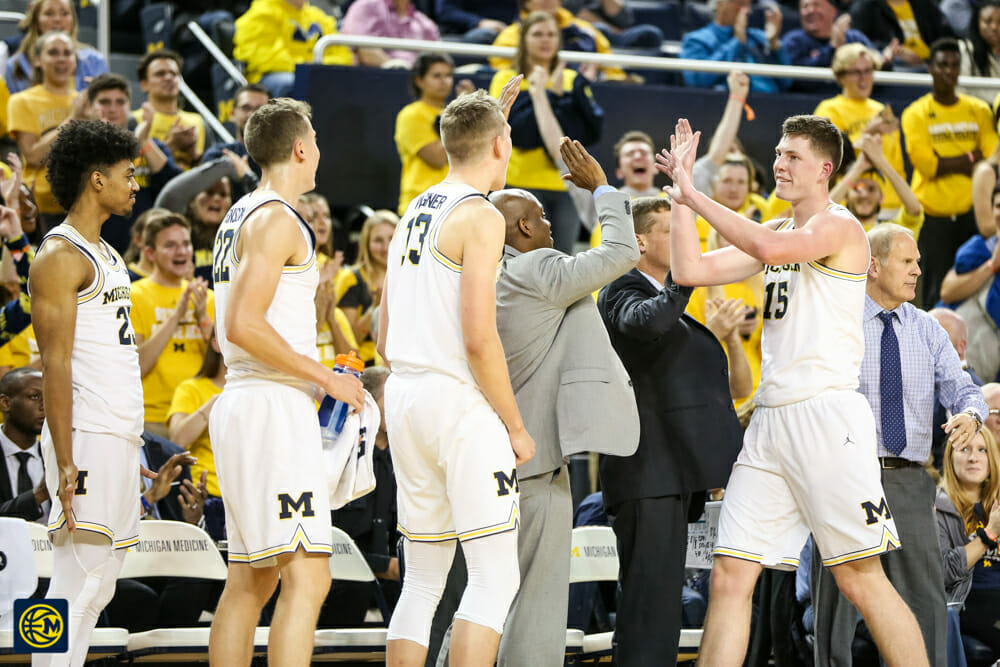 Michigan heads to Maui with a 3-0 record and a whole lot of questions. Though the Wolverines have won each of their three games, they’ve cut it close in all three as well. Here are five takeaways from Thursday’s win over Southern Mississippi.

Michigan heads to Maui with a 3-0 record and a whole lot of questions. Though the Wolverines have won each of their three games, they’ve cut it close in all three as well. Here are five takeaways from Thursday’s win over Southern Mississippi.

Jon Teske can be a real contributor

Muhammad-Ali Abdur-Rahkman’s reaction put it better than anything else. After the game, in the interview room, Abdur-Rahkman came out with Teske to talk to the media and about 75 percent of the media walked over to Teske. Rahkman laughed, put his hands on his knees, then did the same thing again. There was nothing else he could do.

Teske — just days after what John Beilein called his best performance in college to date — put in a 10-point, 11-rebound performance. The sophomore was a defensive tour de force as well, forcing miss after miss from Southern Miss during a decisive 10-minute stretch in the second half.

“You know what he’s really doing is he’s really pursuing rebounds,” Beilein said. “He was a guy that would box out and keep boxing out and take himself out of the play. And we had a ‘hit and go get’ attitude with him.

“…His whole idea is, ‘Jon, you don’t need a whole lotta moves. Just catch it, keep it up, put it in, if he’s over there, pivot and put it on the other side.’ If he just gets to the glass every time and gets to the glass, he’s gonna be able to clean up things as well”

This is more than we’ve ever seen from Teske and we should be wary of small samples. However, he looked good in limited minutes against North Florida and Central Michigan as well. It’s hard to see how Teske hasn’t earned himself a permanent spot in the rotation as the team heads to Maui.

Jaaron Simmons is starting to break through

The record will note that it was Simmons — not Zavier Simpson or Eli Brooks — running point during the Wolverines’ best stretch of play.

A group that featured Simmons, Rahkman, Duncan Robinson, Charles Matthews, and Teske came in with about 13 minutes to go in the game and the Wolverines down by two. They left with 2:13 left in the game and Michigan leading 61-45. On that group’s first basket, Simmons found Duncan Robinson with a crosscourt pass in semi-transition. The fifth-year senior knocked down an open corner 3, putting Michigan up by one point and up for good.

Simmons scored just two points and attempted just two shots from the field — a far cry from his numbers at Ohio. However, the grad transfer finished with five assists and played strong defense throughout.

“He understands that, probably we’re not known for defense, but we’re not gonna play guys if they’re not gonna really guard the ball and buy into all of it,” Beilein said. “… So he’s gotta be able to really go out and guard and guard and guard. And he bought into that today and it was — not a big change, but that’s the type of progress he’s making with us right now. He knows he wants to play minutes, well, you’re gonna be in a situation where you need to go out there and really guard and you’ll get more minutes.”

One game won’t make Simmons the starting point guard over Zavier Simpson, especially given that neither displayed much scoring prowess tonight. However, if this team goes places, it will have to figure something out at the point guard spot and Simmons put his best foot forward against Southern Miss.

Robinson did not start this game well. He was just 1-for-3 shooting in the first half — all of the attempts coming from beyond the arc –without much to say on the defensive end either.

In the second, things shifted. Robinson helped spark Michigan’s go-ahead run with that 3 from Simmons. A few minutes later, he got it off the catch, hesitated for a second, and pulled up for 3 with a Golden Eagle in his face. But it wasn’t just the shooting, though it helps to finish 4-of-8 from 3-point land.

After that pull-up 3, Robinson was put in a 1-on-1 situation defensively and forced a miss. The defensive intensity from him — and everyone else — was evident as the Wolverines held Southern Miss. to all of 11 second-half points.

“I think we just all picked up our level of intensity,” Abdur-Rahkman said. “We had the sense of urgency in the second half that we should’ve had at the beginning of the game. And we just picked it up.”

Michigan hasn’t figured out its offense yet

Victory aside, John Beilein’s description of the Wolverines’ offense won’t hearten any fans.

“Our offense was awful today,” he said. “And I think a lot of that has to do (with), we haven’t played a game of man offense since maybe our scrimmage a little bit, where we really played well with our offense. And it was just stagnant and not good. The ball was sticking all over the place. And we gotta trust it more and we’ll be much better at it”

As Beilein pointed out, Michigan hadn’t faced a primarily man defense before playing the Golden Eagles. That means playing a different game — those Charles Matthews elbow jumpers that seemed to define the first couple games were exchanged for pick-and-rolls on Thursday.

Things won’t change in Maui. LSU is a man defense team as well and Notre Dame — which they’ll likely play next — will go man-to-man if it thinks that’s what will work.

As long as Michigan’s offense is still figuring this out, the Wolverines will keep playing bad teams close. And in Maui — at least at the start of the tournament — there won’t be any bad teams to play close.

Matthews, who led Michigan in field goal attempts by a fair margin coming into tonight, was quiet against Southern Miss.

He was part of the lineup that broke the game open and finished with a +12 on/off mark, contributing mostly with good defense before finally scoring on a couple of nice drives and a corner three. But the junior shot the ball just four times against the Golden Eagles’ man defense.

Most of his shots in the first two games came around the elbow — a natural hole in a 2-3 zone. When I asked him about that tendency after the North Florida game, Matthews said he was shooting from there because that’s what was open. Tonight, however, indicated differently.

“They were going underneath every ball screen,” Beilein said. “They had a really low catch on the ball screen. (Matthews will) get more used to that when we see it later on.”

The Wolverines survived tonight without Matthews providing much offense. Over the first three games, one of the positive conclusions we’ve been able to draw is that the team doesn’t seem to be dependent on the same players every night. But it’s hard to believe Michigan keeps it together against better competition without a larger contribution from Matthews.