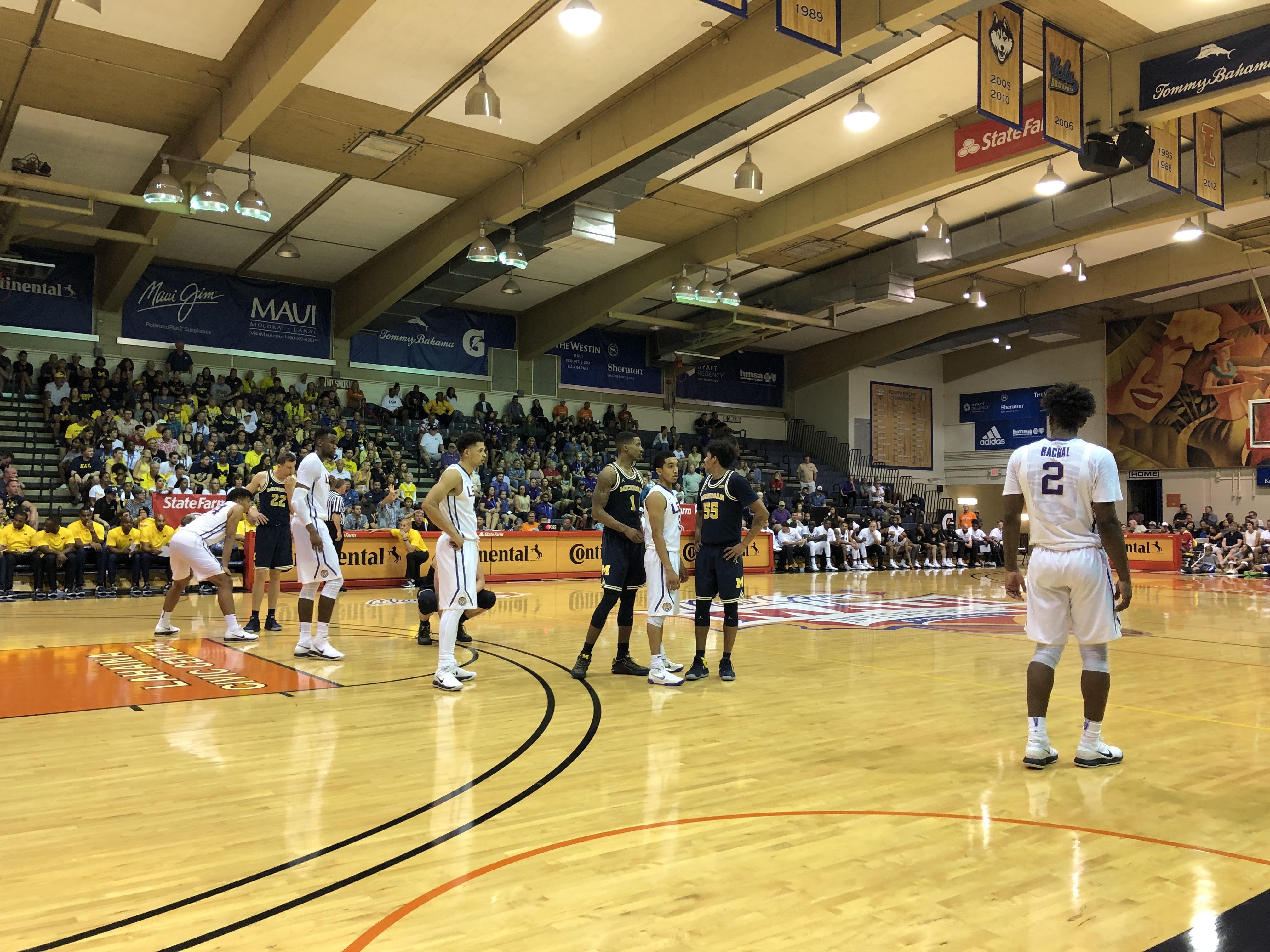 This one is going to sting for a while. Michigan did all of the hard work to finally take the lead after trailing for 31 minutes. Then the Wolverines pulled away by 9 points only to let it all slip away down the stretch.

This one is going to sting for a while. Michigan did all of the hard work to finally take the lead after trailing for 31 minutes. Then the Wolverines pulled away by 9 points only to let it all slip away down the stretch.

Michigan was outscored 18-7 over the final 5 minutes of play and walked away with a loss as Muhammad-Ali Abdur-Rahkman’s desperation three-pointer missed and Moritz Wagner wasn’t able to follow the miss.

Wagner and Charles Matthews played up to their billing, combining for 52 points on 19-of-31 shooting but it wasn’t enough to carry the Wolverines.

LSU freshman point guard Tremont Waters was the best player on the floor and he dominated the game late, magnifying the fact that Michigan still doesn’t have a proven point guard that it can trust in crunch time. 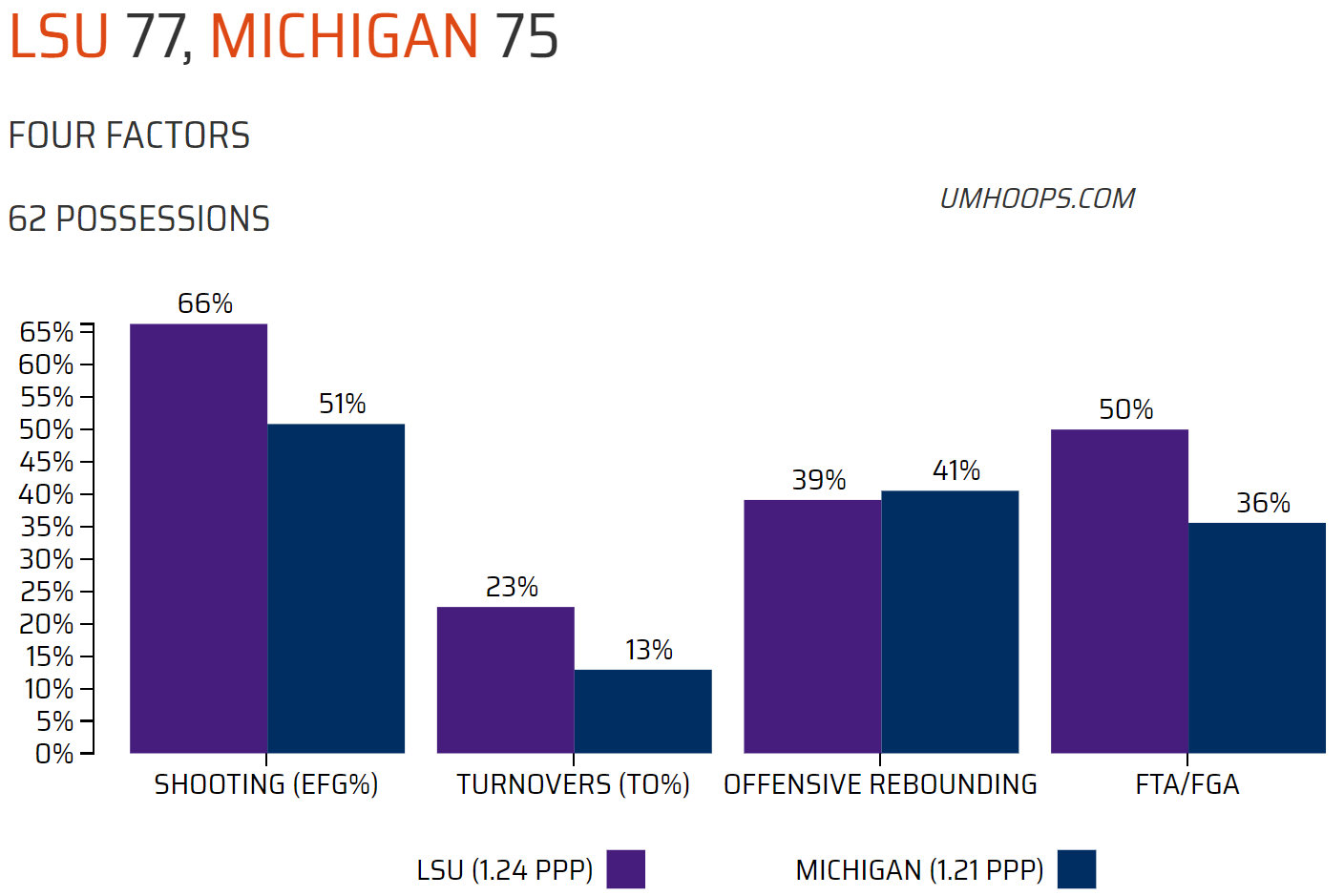 Michigan’s offense sputtered in the first half, managing just 29 points in 30 possessions, but it was almost flawless in the second. The Wolverines scored 46 points in 32 second half possessions — 1.44 points per possession  — and still lost the game.

That’s because the defense just wasn’t good enough, especially late. LSU posted a 66% effective field goal percentage, rebounded 39% of its missed shots and got to the free throw line 23 times. If you give up over 1.2 points per possession, you are going to lose games more often than not.

Michigan made critical late mistakes on offense — Eli Brooks missed two big shots, Matthews and Brooks both missed a free throw and had a costly turnover each — but the bottom line is that the Wolverines couldn’t get the stops to ice away the game. The Tigers scored 18 points in the final 9 possessions of the game. If Michigan gets 1 or 2 stops during that span, the game is probably over.

The good news is that Michigan’s offense finally figured out some things that work. Everything positive that Michigan did offensively came from Charles Matthews and Moritz Wagner and their best moments originated from two-man side ball screen action. Wagner picked and popped to the perimeter and drove to the basket consistently while Matthews posted up smaller defenders and crashed the glass.

The bad news on offense is that Michigan still doesn’t really have a point guard. Beilein rode Eli Brooks to the finish line tonight and he made some big plays early, but made costly mistakes late. Zavier Simpson and Jaaron Simmons failed to impact the game in any way during their minutes — combining for 0 points and 3 assists to 3 turnovers  — leaving the Wolverines where they started at the lead guard. Michigan needs production from that spot and it isn’t getting it right now.

The result hurts beyond a single loss because Michigan will face Chaminade on Tuesday (8 p.m. ET) instead of Notre Dame. A Division II opponent won’t help the RPI and there’s nothing to gain for the Wolverines, who now need to knock off the Silver Swords and then take care of VCU or California on Wednesday to save face.