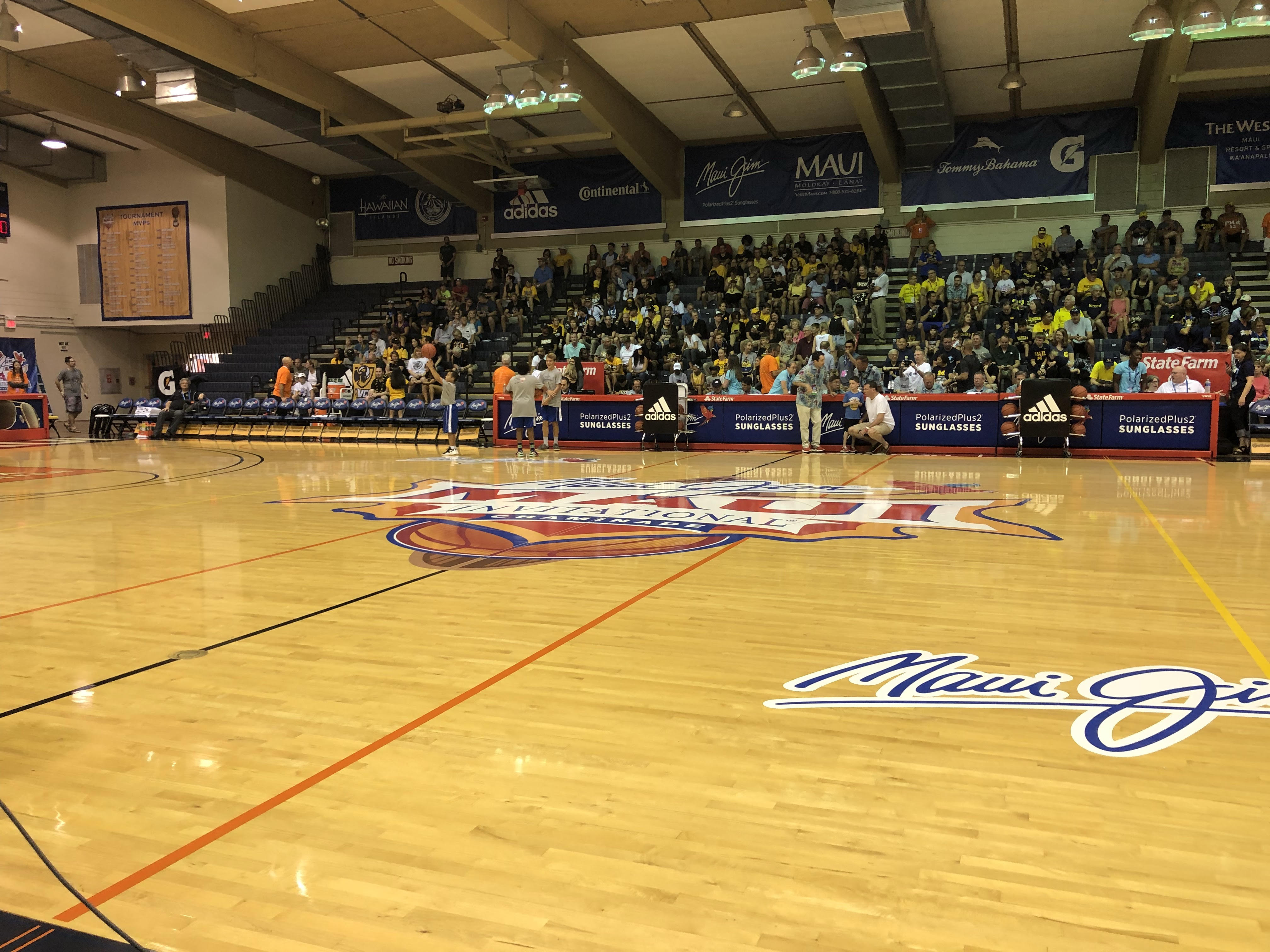 Michigan used an 11-0 run in the final two minutes to beat VCU and escape Maui with a 2-1 record.

Michigan closed its third game in three days with an 11-0 run to escape the Lahaina Civic Center with a 68-60 win over VCU.

The Wolverines gave away an 11-point lead, turned the ball over 9 times in the second half and missed 9 free throws, but they still figured out how to erase a three-point deficit with 2 minutes to play. In short, they made the winning plays that they failed to make on Monday night.

Moritz Wagner and Muhammad-Ali Abdur-Rahkman stepped up down the stretch. The duo scored the final 11 points of the game after combining for just 11 points on 5-of-17 shooting in the first 38 minutes of the game. 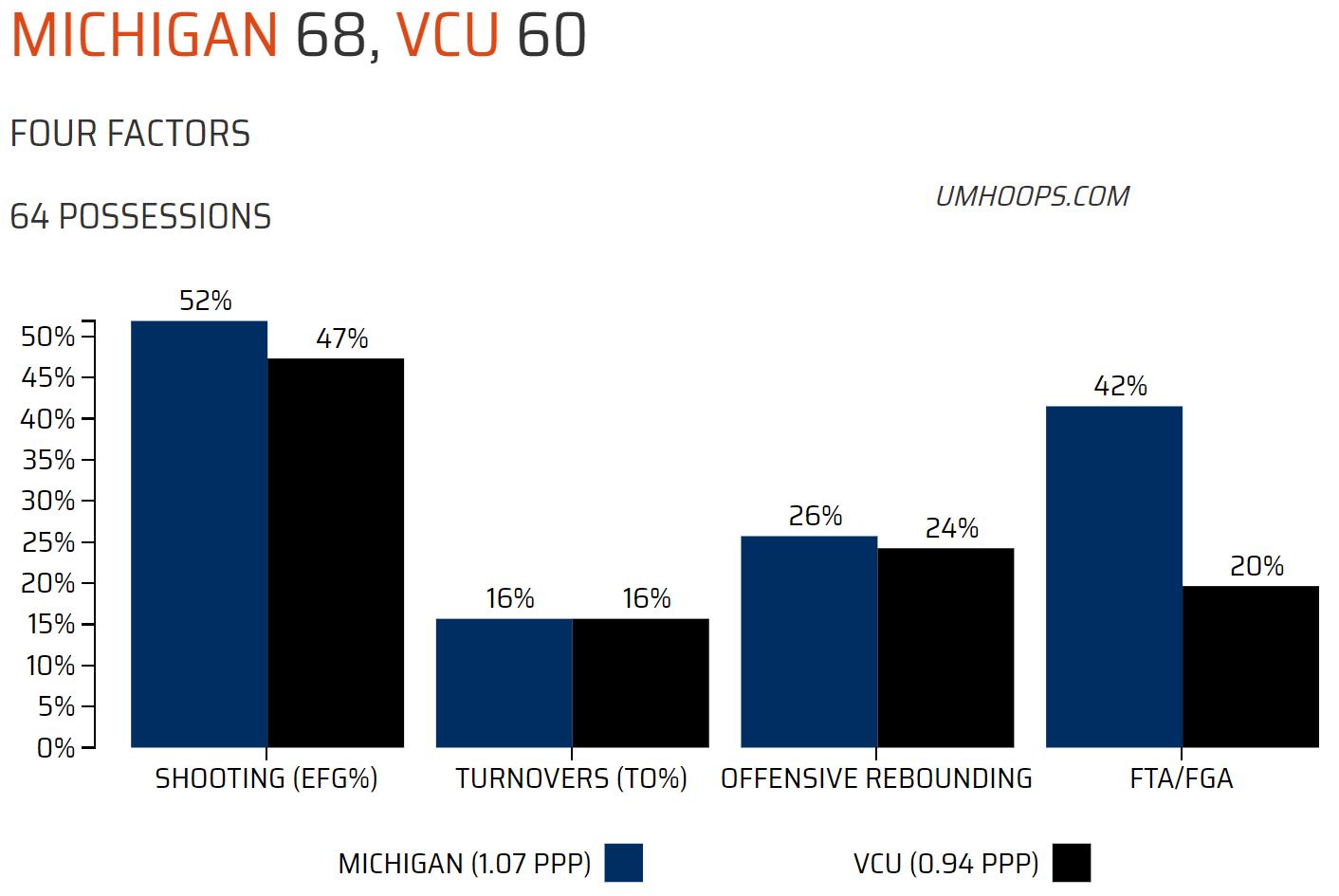 Michigan’s offense managed 1.07 points per possession, but the second half execution left much to be desired. Michigan only made 5 threes in the game and didn’t make a three in the second half until the final 2 minutes. In a 33 possession second half, the Wolverines scored 11 points in the final three possessions and 21 in the first 30.

The Wolverines got sped up by VCU’s switch from man-to-man pressure to its vintage diamond zone full court press in the second half. Beilein noted after the game that it wasn’t always the press that forced turnovers as much as the decision making after breaking the press.

On a night when the threes weren’t falling, Michigan made 20-of-33 two-point attempts (61%) and was able to find just enough easy baskets in transition (16 fast break points) and inside (40 points in the paint) to keep the offense going. Michigan would have been even more effective inside if it could make free throws, but it was just 13-of-22 at the line.

Defensively, this was a strong performance overall against a VCU team that had played well offensively. Michigan closed the game with three consecutive stops and held the Rams to .94 points per possession on the day. The Wolverines’ blanked VCU’s transition game and didn’t allow a single fastbreak point after the Rams had scored 29 the night before against Cal.

The Wolverines did a great job of running shooters off the line and held VCU to just 3-of-11 three-point shooting. The only three that VCU made in the second half came because Beilein tried to signal for a switch between Eli Brooks and Duncan Robinson and only one of them saw it. Defensive rebounding was another pregame key and the Rams only rebounded 24% of their misses for 8 second chance points — their worst offensive rebounding game of the season.

Another impressive defensive stat? VCU only made 6 assisted baskets all game.

This team still has a long way to go, and many of the same pre-Tournament questions to answer, but those questions will be easier to answer leaving Maui with two wins rather than just one.

The point guard position is still up for grabs and no clear answer has emerged. Zavier Simpson lost his starting spot after the opener and then was on the floor for the final 6 minutes of today’s win. Eli Brooks brings flow to the offense, but can he defend and is he ready to be the starting lead guard? Jaaron Simmons didn’t even see the floor in the second half.

The Wolverines also still need to find trusted options off the bench other than Jon Teske.  Three starters played at least 33 minutes today, with Muhammad-Ali Abdur-Rahkman logging 40, despite the fact that this was the third game in as many days. Bench options other than Teske combined for just 9 minutes, 4 points, 2 assists and 3 turnovers — that’s not enough.

Michigan will fly back from Maui over the next two days, with part of the group flying tonight and the rest on Thanksgiving, and prepare for a Sunday afternoon game against UC Riverside before heading to North Carolina for the Big Ten/ACC Challenge. 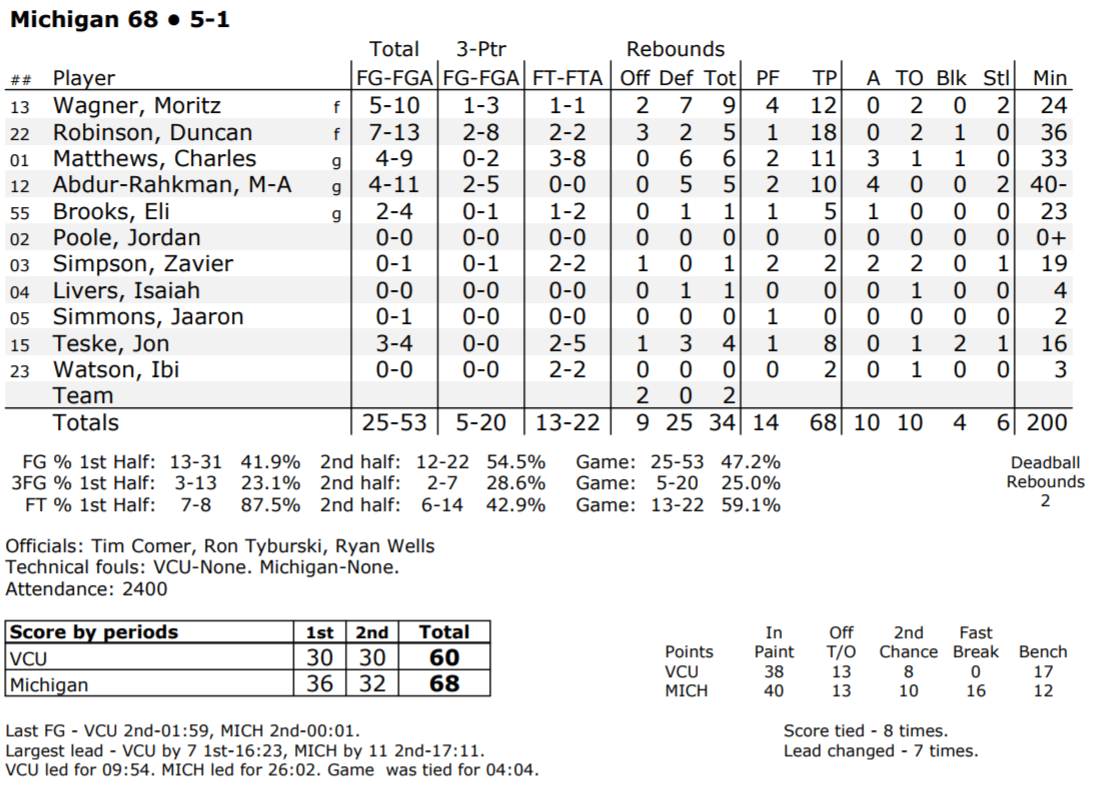