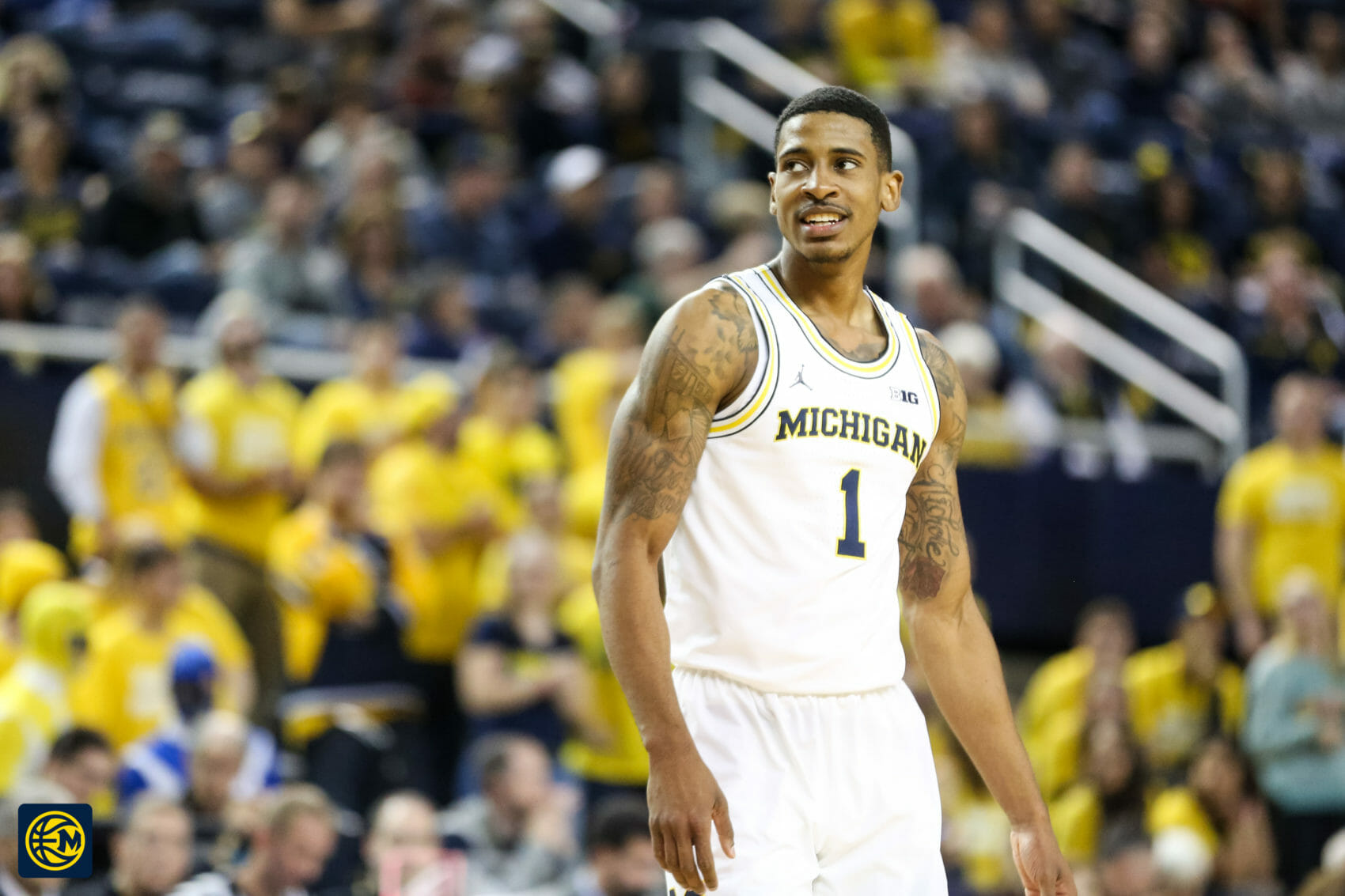 Michigan put in its most dominant performance of the year on Sunday, thrashing UC Riverside 87-42.

Michigan put in its most dominant performance of the year on Sunday, thrashing UC Riverside 87-42. This amounted to a tune-up between the Maui Invitational and Wednesday night’s matchup against defending national champion North Carolina, but it’s hard to imagine that things could have gone any better.

Everything I say about this game comes with the disclaimer that it was against UC Riverside. But Matthews looks much more comfortable now than he did before Maui and it was reflected in his play on Sunday. He dropped 17 points on 7/12 shooting, racked up 12 assists, then backed it all up with good defense. Matthews was the best player on the floor and he knew it.

Early on, he was a catalyst in the halfcourt and transition alike. Matthews hit Moritz Wagner off a pick-and-pop for a midrange shot for his first assist of the afternoon. A few minutes later, he found Eli Brooks in the corner off a drive and kick for 3. Matthews was consistently ahead in transition as well. Muhammad-Ali Abdur-Rahkman found him for a dunk early in the contest. A few minutes later, the two combined with Brooks to produce a layup. All of that happened in the game’s first six minutes and it only got better from there.

Matthews was one of Michigan’s biggest question marks heading into the year. If he plays to his ceiling, the Wolverines’ outlook changes dramatically. When Matthews was struggling a few weeks ago, Michigan had trouble with North Florida, Central Michigan, and Southern Mississippi. That wasn’t a coincidence. This team might live and die with Charles Matthews.

“I think his start (to the season) can be explained very easily: he didn’t play for two years,” said John Beilein after the game. “His time at Kentucky was very short. He never had to make decisions at Kentucky, he always played off the ball.

“Now, the lights come on and he’s gotta do it in real time and just learn. He’s really a very young player with huge potential.”

Poole was a mainstay on the bench at the beginning of the year, only cracking the rotation against Division II Chaminade. After today, however, he could be here to stay.

Poole played just 11 minutes, about half of them in what amounted to garbage time, but it’s hard to argue with the results. The most electric sequence of the game came late, when Poole swatted away a Highlander layup in transition, then came down and hit a 25-foot 3-pointer on the other end. For my money, that was the loudest Crisler Center has been all year.

“I knew (the shot) was going out, especially after I got the block,” Poole said. “And it was kind of like the momentum all built up.”

Added Moe Wagner: “(Poole) eats this energy thing up. It’s kind of like me. He makes a shot and he has to do some kind of gesture.”

That’s not to say Poole was perfect, far from it. Especially in the first half — when the game was a little more competitive — he struggled at times. He missed a transition layup, though Duncan Robinson managed to put it back. Later on in the half, Poole succumbed to elevator doors on defense, handing UC Riverside an open 3, which they missed. It’s also worth noting that he was the only Michigan player with a negative on/off differential in the first half.

However, the freshman finished strong with 11 points on 4-of-9 shooting from the field, including 3-of-6 from beyond the arc. We’ll see if he continues to get playing time against UNC, but based on Sunday, he should get minutes.

He’s developed chemistry with Charles Matthews in the screen game, hitting two 3s off pick-and-pops on Sunday. The Wolverines also tossed in an action where the guard curls up top for a 3 off a pick-and-roll. Eli Brooks hit one from outside off that action on Sunday with Matthews and Wagner on the pick-and-roll. The two even ran split cuts at one point, buying Wagner an open 3 at the top of the key, which he hit.

“We knew they were gonna go out a hard blue — what we call a hard hedge (on) the ball screen,” Beilein said. “And so with that in mind, Moe I think found some short rolls”

Wagner was active on the boards as well, a common theme so far this season. He’s already surpassed last year’s mark with three double-digit rebound games. Wagner’s defensive rebounding percentage is at 34.9, up from 15.2 last season, per KenPom.

“(Rebounding) was definitely something I wanted to improve,” he said. “And it’s still in progress.”

The rotation is still in flux

Seven games into the year — nearly the entire cupcake-y part of the schedule — and the rotation feels murkier than it did before the first ball had been tipped.

With Jordan Poole cracking the rotation on Sunday, things feel even more complicated. Ditto for Ibi Watson and Isaiah Livers, who have played minute at the wing but struggled to gain footing.

“Jordan Poole and Isaiah, people like that — I thought Ibi had a good day today too — that’s up for grabs and it’s still up for grabs,” Beilein said. “And it will be every game. I’m just gonna go, ‘Who practiced well? Alright, he practiced well, go in.’ ”

As for point guard, Beilein has said in the past that he wants to trim the current three-man rotation down to two. What complicates things, however, is that he doesn’t want to take Jaaron Simmons out of the rotation and Simmons happens to be the runt of the litter right now.

“Eli gives us great flow, better flow,” Beilein said. “Zavier gives us really good defense and we’re trying to find out where it is. And Jaaron’s just struggling right now coming off the bench. He’s gonna be in every game, he’s gonna play every game. One of these days, he’s gonna come out of those struggles.”

If things keep going the way they are now, one of two things are going to happen: either Simmons is going to be out of the rotation or Michigan is going to have three point guards all year. Brooks is the best option on offense right now and deserves to be playing. Simpson’s defense and is probably good enough to keep him playing even if the offense is clunky with him running things. Maybe Brooks’ production tails off against better competition and he falls out of the rotation, but right now, this is the state of things.

Michigan is capable on defense

Michigan has a 30.1 3-point attempt rate — 34th in the country — along with a 23.1 free throw rate, 21st, per KenPom. The Wolverines were certainly lucky on Sunday insofar as UC Riverside was just 3-of-14 from beyond the arc. But keeping the Highlanders to just 14 attempts from 3 and holding them to just six free throws all day is a big positive. Those two things alone will keep Michigan good enough on the defensive end to be a contender. If the Wolverines can force as many turnovers as they did on Sunday, that’s just gravy.

Michigan created 15 turnovers, with Matthews, Abdur-Rahkman, Simpson, Jon Teske, and Duncan Robinson all chipping in with steals. Up 21-8 , the Wolverines played the closest thing they’ve had all year to a perfect defensive possession. They shut down every single action UC Riverside tried to run, forced the ball-handler into the corner, double-teamed, and forced a turnover.

“I had to settle (assistant coach Luke (Yaklich) down in the second half,” joked Beilein after the game. “We’re up by 35 and he’s really upset with some people.”