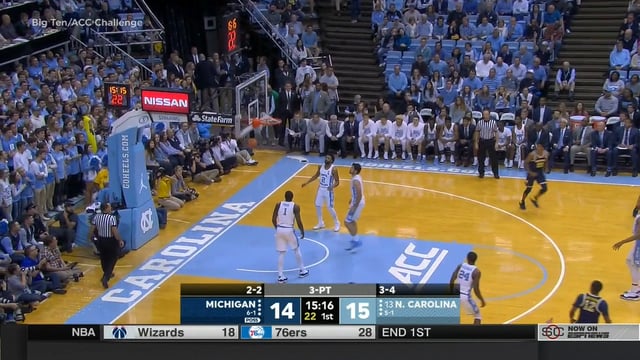 Well, that wasn’t nearly as close as Michigan’s last game against North Carolina.

The Wolverines hung tight for a few exciting, breathless minutes. Things fell apart quickly though, and once they did, Wednesday night’s game against the Tar Heels took a turn for the worse.

“I think North Carolina might be that good and we’re definitely not that bad,” said John Beilein after the game. “But we certainly played poorly today, and we’ve just got to take it.”

Those first few minutes sure were exciting, huh?

Perhaps in remembrance of last year’s game against UCLA, the Wolverines came out firing against North Carolina. They opened the game up 8-of-8 — including 4-of-4 from 3 — before Robinson missed the team’s first shot at 13:43.

Unfortunately for Michigan, though, the Tar Heels opened up just as hot. They started off 8-of-11, 4-of-5 from three. The key difference? They stayed hot, cutting through Michigan’s defense like a hot knife through butter, while Michigan cooled off.

“It’s one that we’ve got to grow from,” Beilein said after the game. “But I’m disappointed that some of the veterans weren’t as gritty as they’ve been in the past.”

There’s no way around it: this one was a killer for the Wolverines. With just over 6 minutes remaining in the first half, Michigan’s fifth-year senior forward found himself on the break with the ball in his hands. Robinson slowed up as a defender blew past him — and promptly left the ball short at the rim, missing an easy bunny that would’ve tied the game at 34.

The Tar Heels ran down the other way, Seventh Woods found Theo Pinson and instead of a tie game, the Wolverines found themselves down by four. North Carolina promptly ripped off a 11-0 run — it finished the half on a 17-5 run as well — and Michigan’s chances at the road upset were effectively over.

It’s been a rough month for Michigan’s prized grad transfer.

The fifth-year senior point guard opened up his career with scoring performances of 2, 5 and 2. He followed that up with four straight scoreless games, the nadir of which was a game against VCU in which he played just two minutes.

Simmons had only one game last year where he scored just two points, a 53-49 loss to Eastern Michigan on Jan. 14. Before this season, he hadn’t been held scoreless since his freshman year — two teams ago.

Simmons finally got back on the board Wednesday night, though, hitting a relatively big shot. With 2:34 left, his three ended North Carolina’s 11-0 run. It ended Michigan’s 4:12 scoring drought. It ended Simmons’ four-game scoreless streak. It didn’t do much more than that, though.

4. Rough opening to second half

The Wolverines didn’t have much of a chance after entering the half down 14. They had even less of one after the Tar Heels opened up the half with a quick 6-0 spurt to extend their lead to 20.

Garrison Brooks corralled an offensive rebound, Luke Maye was fouled and hit both free throws, Brooks threw down a dunk and Joel Berry II finished at the rim. Michigan could not have drawn up a worse start coming out of the halftime break.

Robinson was no match for North Carolina’s March hero. The former walk-on exposed Michigan’s problems on defense, proving to be a difficult matchup. Maye, who entered the game averaging 45 percent shooting from three, didn’t need to do much from deep.

He did nearly everything inside the arc, finding some success down low and bruising Robinson, Isaiah Livers and the rest of the Wolverines.

“Luke Maye is a really tough matchup for us,” Beilein said.“We’re playing really small with Duncan Robinson as a skinny-four man. This was really a bad matchup, and it really hurt us.”

Maye finished with 27 points on 11-of-16 shooting, proving easily to be the most valuable player on the court Wednesday night.