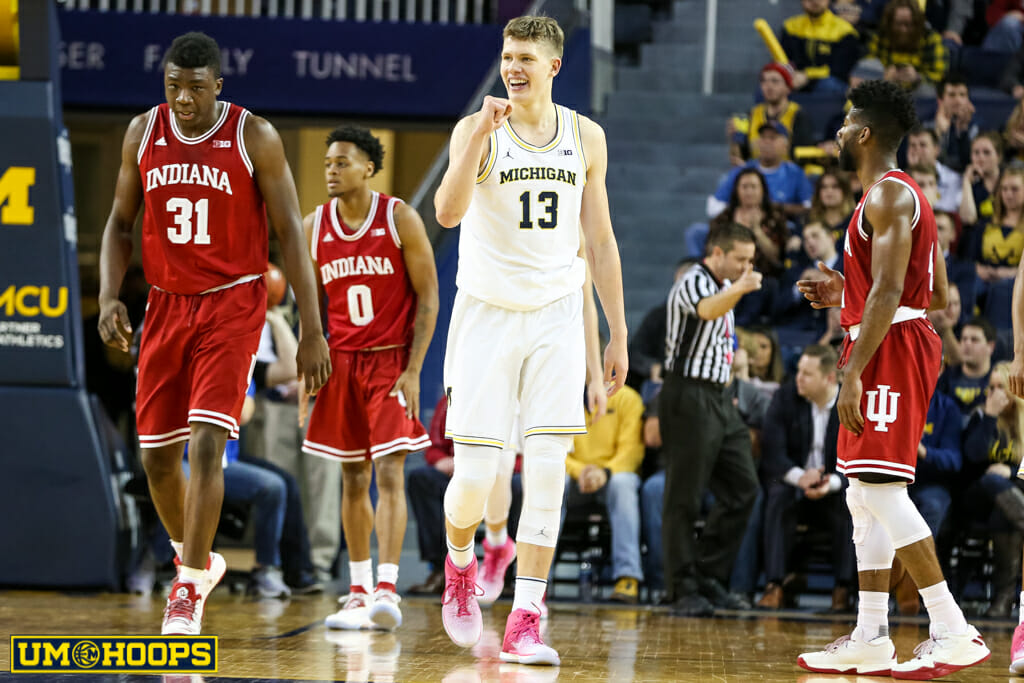 Michigan hosts Indiana on Saturday (12:30 p.m., CBS) as it kicks off the Big Ten season.

That treacherous December schedule that John Beilein discussed throughout the preseason is finally here.

The Wolverines open conference play on Saturday afternoon (12:30 p.m., CBS) at the Crisler Center against Indiana in an attempt to bounce back from a thorough defeat at North Carolina. Then they’ll travel to Ohio State, host UCLA and head to Texas in the next two weeks.

The Hoosiers enter the Big Ten opener after giving Duke a scare at Assembly Hall before eventually falling short. They lost the first game of the year to Indiana State, but have been gradually righting the ship under new head coach Archie Miller.

The most encouraging news early on this year for Indiana fans is that Archie Miller might have fixed some of Indiana’s turnover concerns. The Hoosiers are giving the ball away on just 18% of their possessions, down from 21.4% last season. Indiana is a great 2-point shooting team at 59.3%, but has struggled to hit threes (33.3%). The Hoosiers have scored well over a point per possession in their last four games, including a competitive home loss to Duke. Similar to last year’s Indiana team, this group has been aggressive on the offensive glass, grabbing 35.4% of their misses.

Defensively, Indiana hasn’t corrected many of the problems that plagued it last season. The Hoosiers are ranked 217th in adjusted defensive efficiency and have been abused from the perimeter early on. Indiana opponents have made 41.7% of their threes and Indiana is also ranked 200th or worse in defensive rebounding rate and free throw rate allowed.

The Hoosiers allowed an average of 1.26 points per possession in their three losses which proves that the defense is beatable and when it breaks it crumbles.

Robert Johnson has been more aggressive attacking the basket this year. After attempting more threes than twos in the first three years of his career, he’s shooting 61% on twos and 36% on threes with more interior attempts. He was always more of a perfect No. 2 guard early in his career, but he appears to be growing more comfortable as the featured guard for the Hoosiers.

Sophomore big man De’Ron Davis is one of the best post up scorers in the conference at 1.15 points per post up possession. He moves guys off the block at 6-foot-10, 249 pounds and shoots 76% on twos. Davis only playes around 50% of available minutes due to his tendency to end up foul trouble (6.3 whistles per 40 minutes), but he will be a very difficult cover for Moritz Wagner.

6-foot-7, 230 pound junior forward Juwan Morgan does just about everything you would want from a smallball four other than hit the three. He is a force on the offensive glass, gets to the free throw line, blocks shots and makes 63% of his twos. He should be a tough cover for Michigan’s switching defense because he’ll post up smaller defenders and could get a few mismatches.

6-foot-4 freshman Aljami Durham moved into the starting lineup versus Duke and is a prototypical low usage efficient player. Durham doesn’t turn the ball over, shoots 59% on twos and 35% on threes. He also does a great job of getting to the free throw line.

Point guard has been a consistent issue for Indiana in the post-Yogi Ferrell era and 6-foot-1 senior Josh Newkirk is starting at that spot this year. Newkirk is Indiana’s best setup man and can hit the open three (39%), but he has a turnover rate of 24.9%.

Sophomore guard Devonte Green splits his time between the two guard spots. He can be wild with the ball (26% turnover rate) but provides some playmaking ability off the dribble for the Hoosiers and hits 36% of his threes.

The Hoosiers do play a deep bench and both Collin Hartman and Freddie McSwain should see some minutes on the wing.

KenPom likes Michigan in this one by a final score of 73-65, giving Michigan a 77% chance of defending its home floor. Both of these defensive have been questionable early on and I’d expect a high scoring affair to tip off conference play.