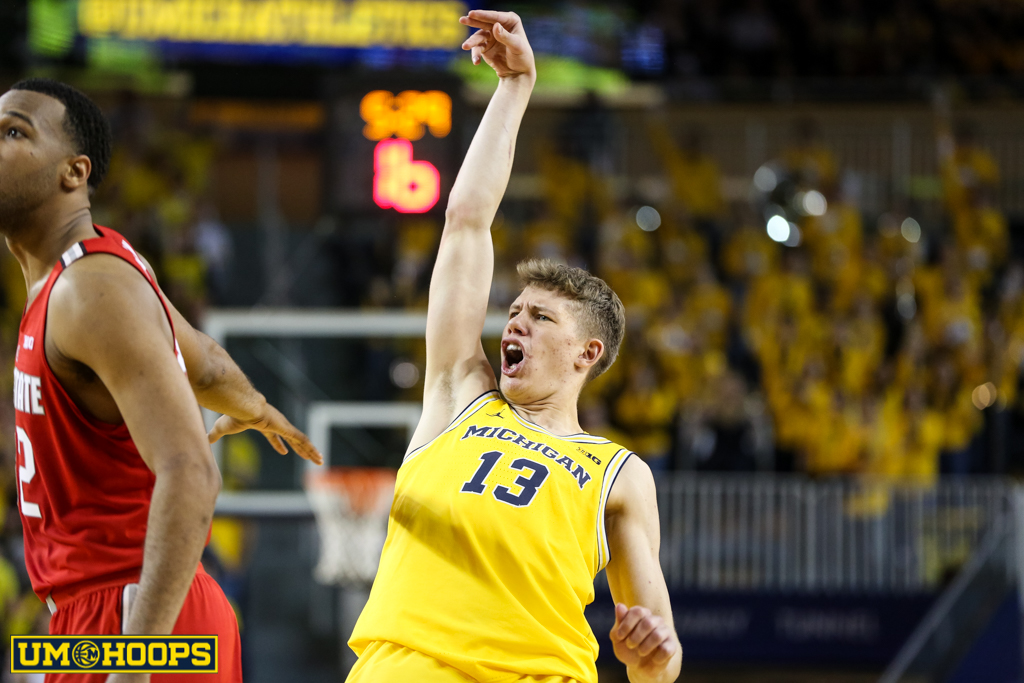 Trips to Columbus have rarely been fun for John Beilein and his Michigan program.

It doesn’t seem to matter how good or bad Michigan or Ohio State is in any given year, it is just hard for Michigan in Columbus. John Beilein has won just a single game at Value City Arena during his tenure and that was back in 2014 when his team won 15 Big Ten games.

They’ll get something of a reprieve without Thad Matta, who had a 14-7 record against John Beilein during his tenure at Ohio State, on the opposing bench. New head coach Chris Holtmann’s first few months in charge have been a bit of a roller coaster. The Buckeyes enter today’s game after a dominating win over Wisconsin in Madison on Saturday, but they also dropped three games in November including a game against Holtmann’s old team, Butler, that they led by 15 points with under 4 minutes to play.

A few staples of recent Ohio State teams — namely Keita Bates-Diop and Jae’Sean Tate — remain in Columbus, but Holtmann has issues at the point guard position and not a lot of depth to work with.

Ohio State’s tempo free profile doesn’t jump out at you in any one area. The Buckeyes are ranked 71st in adjusted offensive efficiency and 60th in adjusted defensive efficiency. This is a team that might not be elite in any single part of the game, but has the balance of a very solid team.

The Buckeyes score primarily inside the arc. They shoot 54.5% (67th) on 2-pointers, but just 34.3% (189th) on 3-pointers with 33.9% (250th) of their shot attempts originating behind the line. They have been just average at getting to the free throw line early on, but rank in the top-100 nationally in offensive rebounding percentage. The crippling flaw of the Ohio State offense has been the turnover. Ohio State gives the ball away on 20.7% of its offensive possessions (248th) and finding reliable playmakers in the backcourt has been a constant struggle.

Defensively, Ohio State has been very solid. Things have fallen apart twice — against Clemson and Gonzaga — but they’ve held their other 7 opponents to 50 eFG% shooting or worse and below a point per possession. The foundation of the OSU defense is great defensive rebounding (17th nationally) and avoiding fouls (28% FTA/FGA, 63rd). The Buckeyes grade out in the 77th percentile defensively against the ball screen, per Synergy, but just the 9th percentile in transition defense.

Ohio State’s main weakness on defense has been the three-point shot. Buckeye opponents are shooting 35.8% from three-point range and attempting 42.2% of their shots from deep. Overall, 38% of the points that Ohio State has allowed have been from three while they’ve only scored 26.5% of their points from three. In short, the Buckeyes have created a reverse three-point gap and this should be a good opportunity for Michigan to repeat the same recipe it executed against Indiana.

Keita Bates-Diop has had a resurgent season after missing the majority of last year to injury. He’s averaging a double-double with 17.3 points and 10 rebounds per game while shooting 56% on twos and 44% on threes. He’s Ohio State’s best perimeter shooter, he loves to drive left and Ohio State will also put him in the pick and pop game where he can pop and slip to the rim. The only area of his game where he hasn’t been efficient this year is in the post, but I’d expect the Buckeyes to post him up considering Michigan’s defensive weaknesses down low.

Senior wing Jae’Sean Tate started the last game at the point guard position as Holtmann continues to look for answers at that spot. Tate is one of Ohio State’s better passers and creators, but his offensive rebounding numbers are way down this year — presumably due to a more perimeter role — and he used to be one of the league’s best putback scorers. He’s shooting 60% on twos and is just 3-of-11 from three-point range, but his combination of strength and athleticism has been a difficult cover for Michigan over the last 4 years.

6-foot-9, 270 pound freshman Kaleb Wesson anchors the middle. He shoots 61% on twos and has even stepped out and knocked in a pair of three-pointers this year. Wesson is also a very good scorer on the low post, grading out in the 86th percentile and he should prove a difficult cover for Moritz Wagner, who has struggled to contain post-up scorers.

Freshman Musa Jallow skipped his senior year and is already in the starting lineup in Columbus. Jallow is a low usage (13% of possessions) player but he finishes inside the arc (65%) and is a good defensive rebounder. He had a 3-of-6 three-point shooting game early in the year, but is just 4-of-18 outside of that contest.

Junior guard CJ Jackson was the starter at point guard, but hasn’t been the most consistent player. He’s shooting 39.5% on threes and leads the Buckeyes in assist rate, but he’s been plagued by turnover issues and inconsistent shooting inside the arc (41%).

Former Michigan walk-on Andrew Dakich is on scholarship at Ohio State and averaging 14 minutes per game backing up the point guard spot. Dakich has a turnover rate of 40% and the Buckeyes have struggled at times when he’s on the floor. They’ve been outscored by 10 points per 100 possessions with Dakich on the floor and outscore their opponents by 23 points per possession when he’s on the bench, per Hoop Lens.

6-foot-2 senior Kam Williams does one thing when he’s on the floor: shoot.  He has 81 assists in his career with 360 3-point attempts. He’s never been a very efficient two-point shooter, he’s still a jumpshooter even inside the arc, but he’s a career 39% three-point shooter. Williams is just 9-of-27 (33%) from deep this season and has been in and out of the starting lineup.

Sophomore big man Micah Potter opened the season as as a starter but has been battling a sprained ankle. He’s only played 13 minutes over the last five games. Former Michigan target Kyle Young will also play some reserve minutes in the post. He’s played a small role and hasn’t yet found his groove from deep (1-of-7).

KenPom likes Ohio State by a final score of 69-68, giving the Wolverines a 47% chance at the road victory. A win could stabilize Michigan’s season with games against UCLA and Texas still ahead, but a loss would ramp up the pressure over the next two weeks.