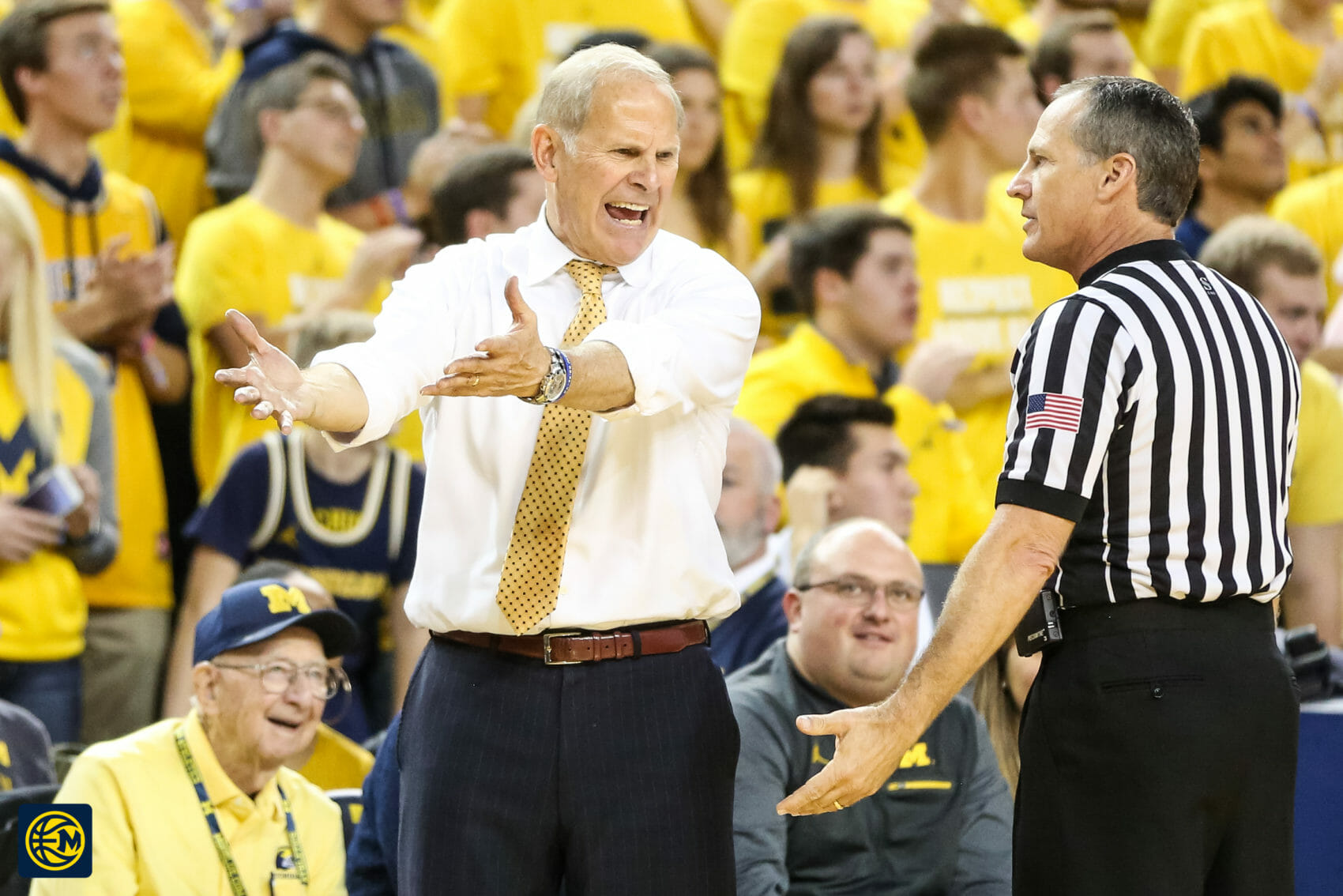 Michigan blew a 20-point lead in Columbus on Monday night.

Michigan’s first 18 minutes against Ohio State looked more like a coaching clinic session on John Beilein’s ball screen offense than a Big Ten basketball game. The Wolverines picked apart Ohio State’s defense and scored 43 points in the first 28 possessions. That’s over a point and a half per possession and about as close to perfect offense as you can draw up.

Michigan led by 20 points late in the half and then Ohio State scored 5 points on one play — a simultaneous made three-pointer and off ball foul — and the game was never the same. That possession started a 26-3 Buckeye run that spanned halftime and flipped the game on its head.

There were adjustments along the way, mainly Ohio State’s decision to switch ball screens instead of hedging them with Kaleb Wesson, but Michigan looked lost from that point onward. When the going got tough, the Wolverines folded.

Michigan’s seniors weren’t able to provide a lift, they were 0-of-9 from the floor in the 2nd half, and Moritz Wagner wasn’t either. The junior big man was just 0-of-6 from the floor with 3 turnovers in 15 second half minutes. 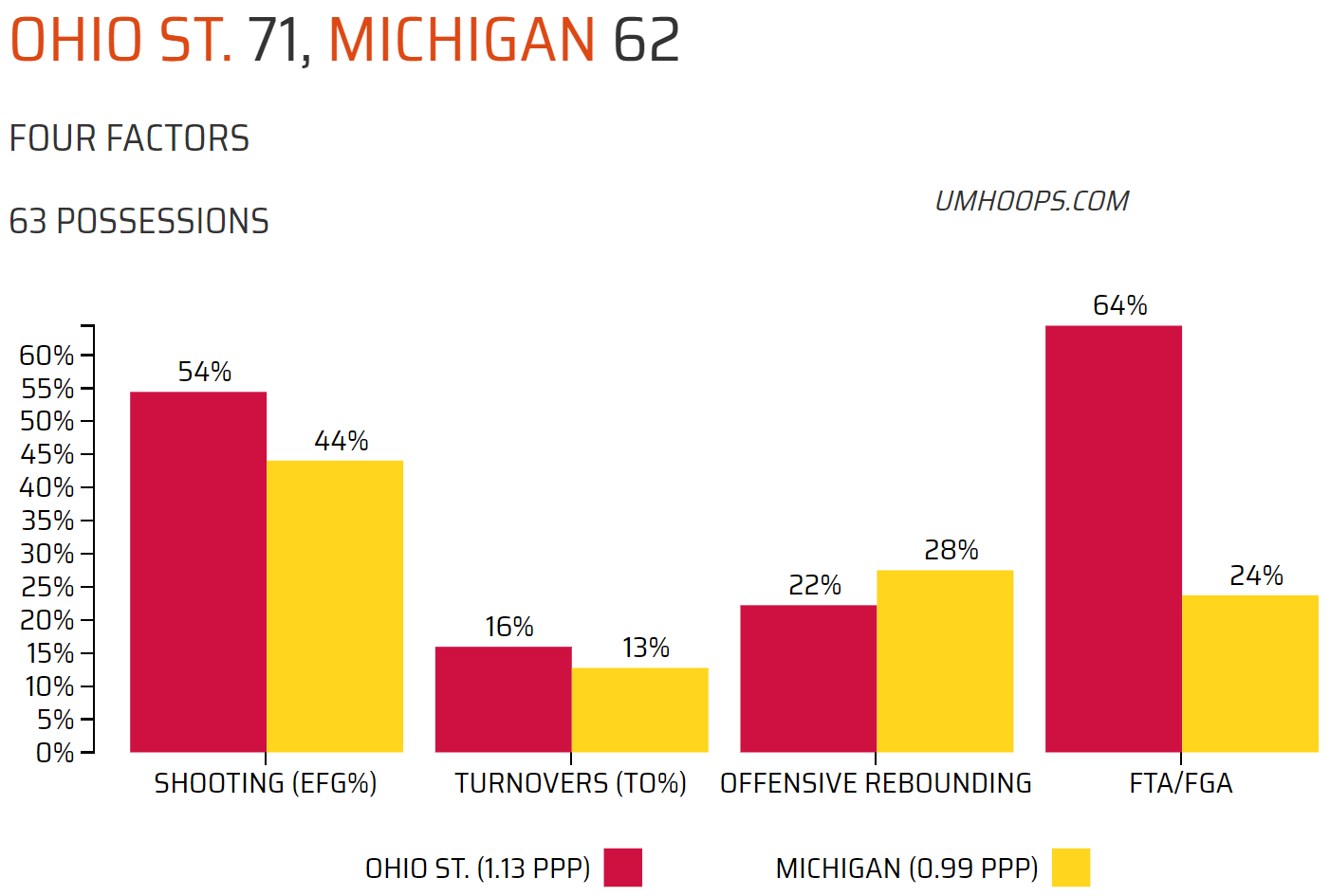 Michigan’s ability to score inside the arc evaporated at halftime. In truth, 2-point shooting tells the story of the game.

After the game Beilein said that he tried dialing up every option as the offense stalled. He wasn’t lying as nine different Wolverines attempted a shot in the second half, none made more than one or scored more than 4 points.

The Wolverines had a 68.3 eFG% in the first half and just an 18.9 eFG% in the second. The last time I can remember Michigan’s offense looking this inept for at least a half was when Eastern Michigan held the Wolverines to 42 points in 60 possessions back in December, 2014.

Ohio State opened the second half by attacking some individual matchups and finishing the driving shots that it missed in the first half. The Buckeyes also won the game by getting to the free throw line, attempting 29 free throws to 45 field goal attempts.

Michigan made an adjustment to roll out a 2-3 zone midway through the second half. The Wolverines played it on almost every possession that started off of a miss or a deadball and it worked for the most part. The defensive stops spurned a 9-0 run — with all 9 points coming at the free throw line — that gave Michigan a 4 point lead with under 5 minutes to play.

Then the same questions that have plagued the Wolverines all season reared their ugly head. Michigan had no one who could score and Ohio State did. The Buckeyes closed the game on a 15-2 run.

Michigan looks like a team that doesn’t have a clue how to win a Big Ten road game. The three players who played major roles on last year’s Sweet 16 team didn’t make a shot in the second half. All three of them have been benched for extended periods at one point or another during the first ten games of the season.

The Wolverines need to find answers during winning time — this is the third game things have completely unraveled — but I’m not sure that any coaches or players even know who is the right guy to answer them. There are another 21 games left on the schedule, but this team has a lot of work to do and a marquee home game against UCLA on the docket for Saturday.