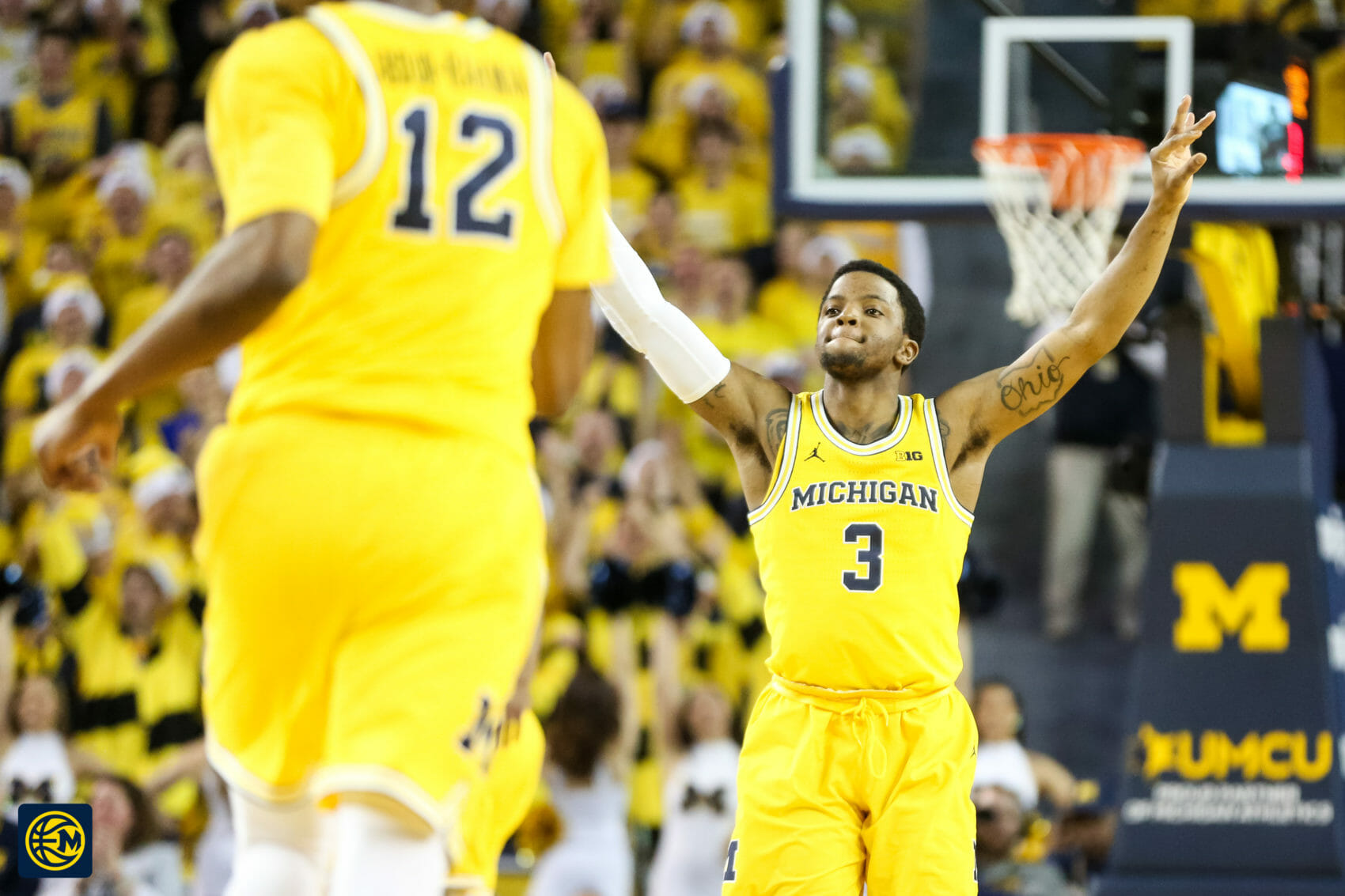 Michigan erased a 15-point deficit to beat UCLA on Saturday.

You don’t have to be a good college basketball team in December, but you have to show a pulse. The Wolverines didn’t show much of one for the first 30 minutes of their marquee non-conference home game against UCLA on Saturday afternoon.

“I’ve never seen anything like this, we go 8-for-22 from the foul line and win a game,” John Beilein said afterward. “It is a great testimony to our kids. We did everything we could to play some inefficient basketball, but when we really needed to suck it up at the end we got it done.”

At times it looked like Michigan was trying to gift wrap the game to the Bruins. The Wolverines struggled to score in the first and allowed UCLA to open the second half on a 16-4 run. Trailing by 15 in their own gym, it was hard to think about anything other than the second half debacle in Columbus on Monday.

But Charles Matthews, Moritz Wagner and Zavier Simpson resuscitated the Wolverines down the stretch.

Matthews and Wagner both had personal 8-0 runs, with Wagner’s back-to-back threes following an emphatic steal and dunk. Simpson earned critical minutes late in the game once again and shut down UCLA point guard Aaron Holiday while providing timely scoring of his own.

Two free throws from Eli Brooks sent the game to overtime where Michigan was finally able to take its first lead since the opening moments of the game and escape with a victory. 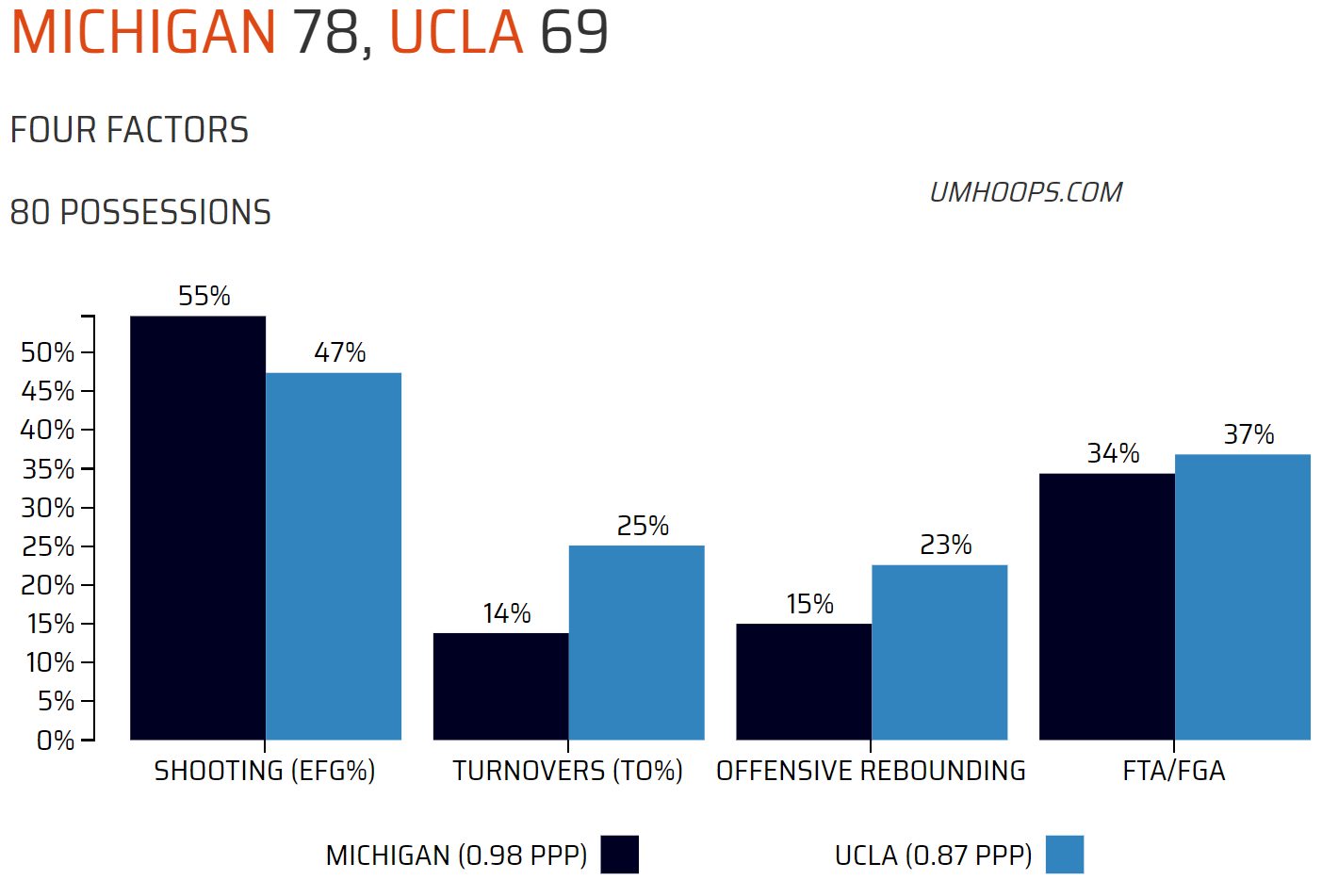 Michigan closed the game on a 33-15 run and its ability to lock down and get stops will draw some headlines, but it was the offense that finally figured things out late.

Moritz Wagner missed a pair of free throws with Michigan trailing by 9 points and a shade over 7 minutes to play. From that point onward, the Wolverines scored 33 points in the next 20 possessions that spanned the end of regulation and overtime. That’s a near-perfect 1.65 points per possession and Michigan’s empty trips were: a missed open three by Duncan Robinson, a fluky double-dribble by Simpson, a missed front-end by Matthews, and a missed pair of free throws by Matthews.

The Wolverines essentially had productive possessions on 19 of 20 trips down the court. In the first 60 possessions of the game up to that point, Michigan had mustered just 45 points or .75 points per possession. We’ve seen moments of brilliance from this offense, but there have also been painful stretches this season where baskets seem impossible to come by.

Michigan’s defense was good down the stretch and got the stops that it needed, but it wasn’t the primary problem early in this game. UCLA scored 54 points in the first 60 possessions (.9 points per possession) and 15 in the final 20 (.75 points per possession). Michigan’s defensive improvement as the game wore on was that it started rebounding, UCLA rebounded 43 percent of its misses in the first half, but only had 1 offensive board in the second half and overtime.

Turnovers were also a great equalizer for the Wolverine defense as the Bruins gave the ball away once every four trips down the floor. Michigan recorded 12 steals (led by Simpson and Robinson with 4) and scored 24 points off of giveaways.

Michigan’s free throw shooting is reaching code red levels of panic. The Wolverines made just 8 out of 22 free throws today and are now ranked 319th nationally in free throw percentage at 61.5 percent. Only two players on the roster (Robinson and Abdur-Rahkman) are shooting better than 70% from the stripe on the season and this is an area where Michigan simply has to improve.

There’s no sugarcoating the fact that Michigan needed this game with a trip to Texas coming up on Tuesday. The Wolverines needed to salvage a quality win out of the non-conference slate and there wasn’t going to be a better chance than UCLA at home. Will this win galvanize the Wolverines ahead of a trip to Austin or does it just emphasize the issues that plague this group. Probably a bit of both, but gutting out a win like this is critical for a team that wilted in key crunch time moments against LSU and Ohio State. 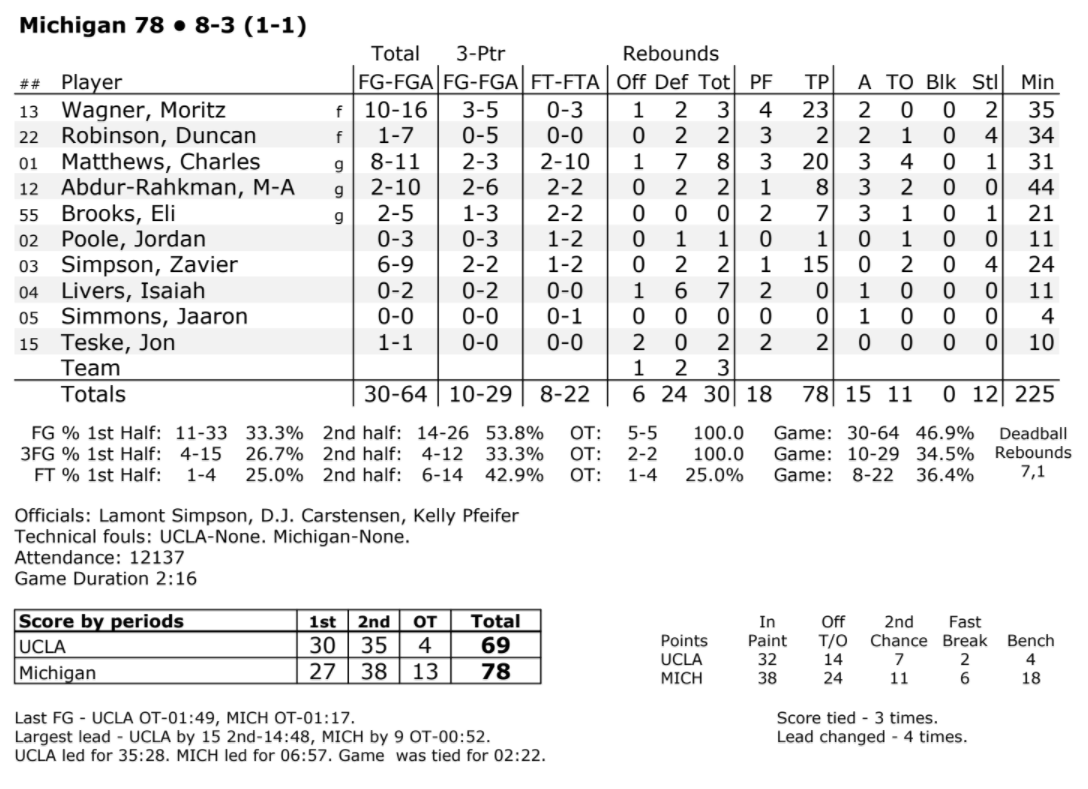