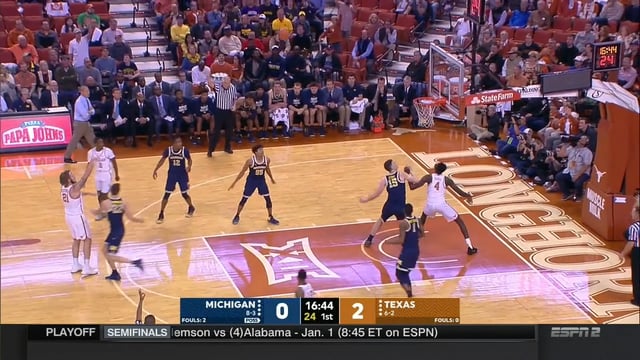 Michigan won its first road game of the season on Tuesday in Austin, Texas. Here are Five Key Plays from the victory.

Michigan won its first road game of the season on Tuesday in Austin, Texas. Here are Five Key Plays from the victory.

Michigan didn’t score before the first media timeout on Tuesday night, but it kept itself alive on the defensive end.

“Well, I thought that we started the game really well. Defensively, I think that we stopped them four times in a row or maybe five times in a row and we only scored one time,” Shaka Smart said after the loss. “I think that there was some frustration there on the part of our guys, but it’s not acceptable to let that affect how you play moving forward.”

Michigan’s defense was great all night against a Texas team that had some exploitable offensive weaknesses. Michigan dared the Longhorn guards to beat them from the perimeter and they just never did.

“If (Texas) had gotten off to a great start, that could’ve been hard,” Beilein said afterward. “But they started out switching every ball screen with (Mohamed) Bamba and I think you have to go in there and take it at them a little bit and let them block a couple of shots.”

2. Charles Matthews closes the first half

At Ohio State last week, Michigan let a perfect 15 minutes of basketball slip away because it failed to close out the first half and open the second half strong. This time, the Wolverines closed the first half out with a run.

Michigan’s playmaking down the stretch all came from Charles Matthews who scored 2 points after being fouled by a three and then knocked down an elbow jumper off of a pindown and then blows by Kerwin Roach for a late layup.

Matthews has that scoring potential, but he had been very quiet for much of the first half. When Michigan is able to spread the floor and allow him to attack, he’s tough to stop at the rim.

In a game that only featured 11 made 3-pointers, hitting three in a row can change everything. Texas had crept all the way back into the game, cutting Michigan’s lead to just 3 points with 14 minutes to play and bringing the cavernous Frank Erwin Center to life.

“(Our) response to adversity is very critical. As a team, we look to each other and stick by each other’s sides,” Matthews said after the game. “We try our best to keep our composure and play Michigan Basketball.”

Matthews provided the first answer as Zavier Simpson drove baseline and found him wide open for a corner three. He buried it and has hit 3 of his last 5 from deep to pull his 3-point percentage up to a respectable 33%.

On the next possession, Matthews isolates a mismatch against Dylan Osetkowski and gets two feet in the paint to collapsed the defense before kicking the ball to Moritz Wagner for a corner triple that Mo Bamba has no chance to defend.

Finally, Wagner gets the ball in one his favorite spots, coming off of a drag screen in transition, and knocks in another triple to extend the lead to 12.

Despite Michigan’s late first half run and second half response, Texas managed to stay in the game. Moritz Wagner left with an ankle injury with 7 minutes to play and Texas immediately got back in the game. Michigan only made two baskets in the final seven minutes of the game and both were from Muhammad-Ali Abdur-Rahkman.

This is the first one and it was certainly a bit lucky. Abdur-Rahkman caught the ball near center court with 5 seconds on the shot clock and had to make something happen. He took a dribble and pulled up from 30-plus feet away. And banked it in.

“We practice shooting all the time, even deep shots,” Abdur-Rahkman said of the shot. “It just felt like it was a normal shot. I didn’t think too much about how deep it was. The shot clock was going down so I had to take it.”

The next bucket by Abdur-Rahkman was even more important and was one that he’s struggled to make this season.

Texas trimmed the lead to two possessions with under two minutes to play and had Michigan on the ropes. The Wolverines struggled to beat the Longhorn trap and then ran clock offensively before setting up Matthews in a late clock situation.

Abdur-Rahkman is matched up with Osetkowski here and does a great job of attacking the quickness mismatch. He puts his shoulder into the much bigger defender and then finishes with an arcing floater over the top.

“He’s better than his stats would say. The bank shot was a bank shot, he didn’t try to bank that, but the runner, he has been missing and we worked on it the last two days,” Beilein said of Abdur-Rahkman’s clutch play. “The runner put us up by eight, it was a huge shot for us. He’s worked on that and he’s got to continue to just stay in there, but his defense has been really good and it’s been very average, so that’s his enemy. He’s such a nice kid that sometimes he’ll just not be as engaged as he needs to be when you are one of the guys.”

This game was as close to Abdur-Rahkman has come all season to being “the guy” for Michigan and it could be a key step in his development as a senior.