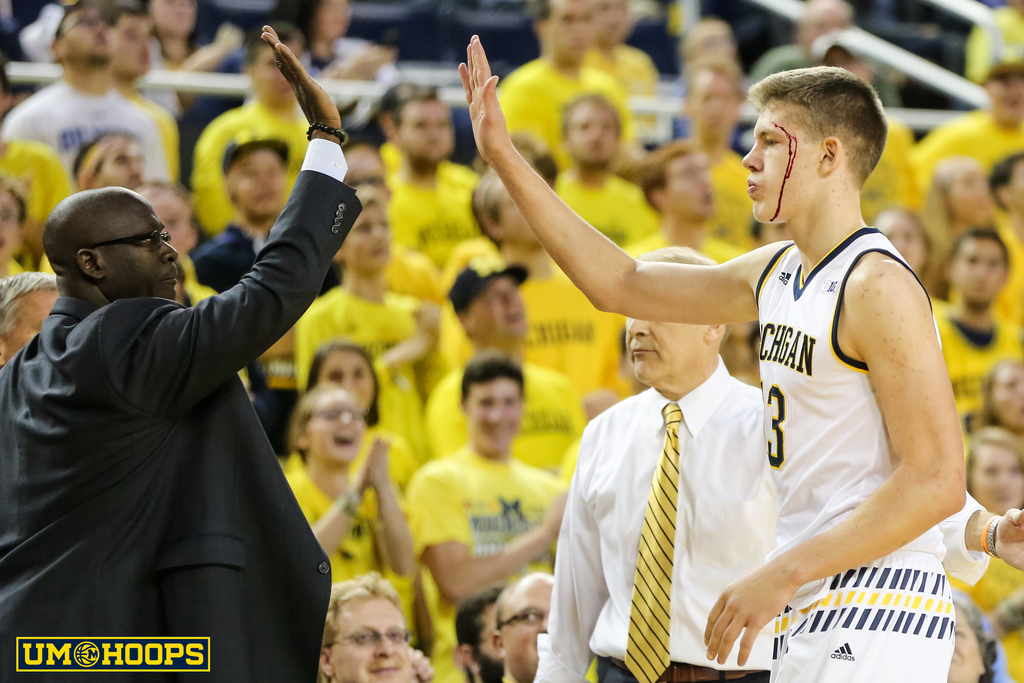 Michigan and Detroit face off at Little Caesars Arena on Saturday afternoon (12:00 p.m., ESPNU) for a game that will feel like a reunion.

Michigan and Detroit face off at Little Caesars Arena on Saturday afternoon (12:00 p.m., ESPNU) for a game that will feel like a reunion.

The Titans have had a tumultuous start to the season with Alexander serving a suspension shrouded in mystery and enter Saturday’s game on a 4-game losing streak with a 4-6 record. The two games that Detroit has played against high-major opponents this season both got out of hand as Virginia Tech picked up a 111-79 win and UCLA won by a similar 106-73 margin.

Those were of course road games and there will be a bit more energy in the building on Saturday as the Wolverines and Titans play the first of two in-state games at Little Caesars Arena with Michigan State vs. Oakland to follow.

Detroit loves to play fast and is much better on the offensive end of the floor. The Titan offense does a great job of getting up a shot on every possession as fast as possible. The Titans are ranked 17th nationally in offensive possession length and turn the ball over on only 16.4% of their possessions (41st). That’s where their offensive prowess stops. They are shooting just 50.5% on 2s (159th) and 31.2% on 3s (284th) for a 49 eFG% (238th). They also ranked 250th or worse in offensive rebounding rate and free throw rate.

Defensively, things have been very difficult for the Titans. They haven’t held a Division I team below a point per possession this season and their combination of pace and subpar defense has allowed over 100 points in 4 different games. Detroit is ranked 298th or worse in all four factors on defense: 317th in eFG% defense, 321st in forced turnover rate, 313th in defensive rebounding rate, and 298th in free throw rate allowed.

There are some familiar names on this Detroit roster, starting with former Michigan forward Kameron Chatman. Chatman has found his groove with the Titans, averaging 17.9 points and 8 rebounds per game while shooting 52 percent on 2s and 40 percent on threes. The former blue chip recruit has been scoring efficiently and shooting it better than most would have expected. Chatman’s offense comes primarily from transition (where he’s been exceptional), spot ups and isolation sets.

Ypsilanti sophomore guard Corey Allen is a high-usage, high-efficiency player on the wing. He’s shooting 57% on 2s and 39% on 3s and averaging 18.7 points per game. Allen is Detroit’s primary pick and roll threat and is great at using a ball screen to get opportunities for himself. He’s one of the few Detroit players who is actually more efficient in the half court than in transition.

Freshman guard Jermaine Jackson starts at point guard. He shoots a lot of 3-pointers (64% of attempts) but connects at just a 26% clip. His assist numbers have been fairly modest and he shoots just 39% inside the arc, but he does a good job of not turning the ball over. Jackson will feature in the ball screen game, but he hasn’t been nearly as efficient as Allen.

6-foot-1 junior guard Josh McFolley plays the majority of his minutes at the two. He has a nearly 50-50 split on 2s vs. 3s, but he’s only shooting 29% from deep this year. He’s a 34% career 3-pointer shooter and has been a high volume shooter throughout his career.

6-foot-7, 260 pound big man Jaleel Hogan starts in the middle. He’s not the tallest five-man that Michigan will face this season, but he is an efficient post-up scorer (87th percentile). Hogan is a good offensive rebounder and draws 4.9 fouls per 40 minutes while shooting 56% inside the arc. He should prove to be a difficult cover for Moritz Wagner, who has struggled defending post-ups this year.

The Titans don’t have a lot of depth at the center position. 6-foot-9, 240 pound freshman Jack Ballantyne sees time as a stretch five option, but he’s shooting just 1-of-9 from long distance (and 0-for-2 inside the arc). Bacari Alexander will also go small at times and play Chatman at the five, according to KenPom minute logs.

This feels like a bounce back game for Michigan’s offense that has struggled to produce consistently over the last few weeks. Detroit struggles on defense and tends to get out over its skis by pushing the tempo a bit too far. On the other hand, a neutral court game coming off of a couple big wins against an in-state mid-major feels like a trap game as well.

KenPom projects an 86-67 Michigan win, giving the Wolverines a 96% chance at picking up their 10th win of the season.