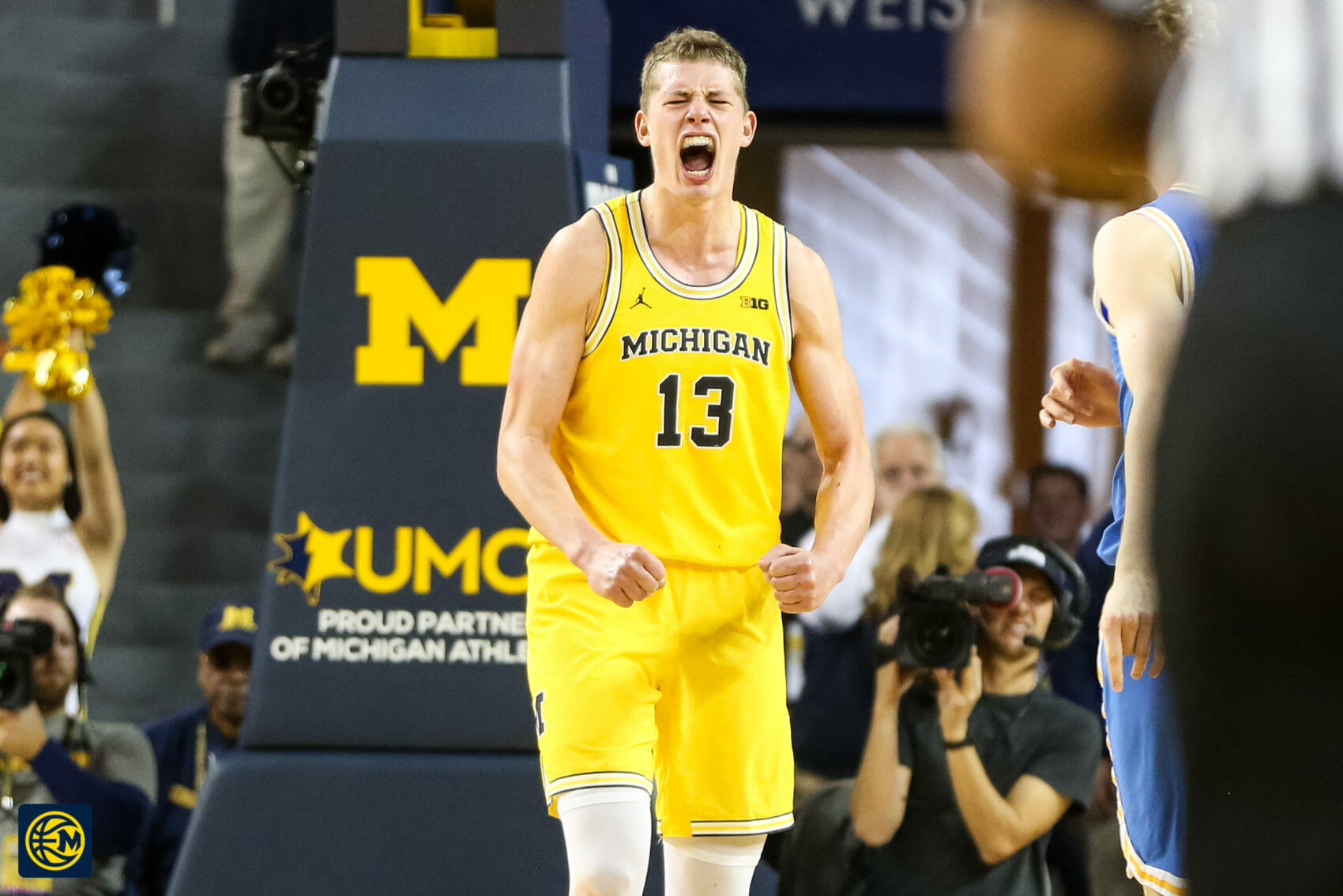 Moe Wagner’s status for Saturday’s game against Detroit is up in the air, according to John Beilein. Wagner practiced this morning, however, was not a full participant. The right ankle injury he sustained at Texas earlier this week is still an issue.

“The veterans got some rest on Thursday,” Beilein said. “Today, (Wagner) did a little bit of stuff. He’s not at 100 percent, that’s for sure. So I’ll wait and see how he feels tomorrow.”

When asked directly whether Wagner would play tomorrow, Beilein said, “I don’t anticipate anything right now. I anticipate waiting to see what he feels like tomorrow, whether he’s out in warmups or whether he’s not warm. We’ll see how he feels.”

Against a team like Detroit — ranked 294th on KenPom — Michigan might have some flexibility to rest Wagner with two other guarantee games ahead.

Chatman, who played at Michigan for two years, has been tearing it up with Detroit this season. The redshirt junior is putting up nearly 18 points per game and leading the Horizon League with 8.1 rebounds per game.

“I’m just happy for him,” Muhammad-Ali Abdur-Rahkman said. “It didn’t work out well here, but he didn’t let that get to him. And he’s been playing well lately and I’m happy for him.”

Added John Beilein: “(Chatman’s) a good player. A very young player, he was here two years and was developing. But he felt he could develop somewhere else even more. But he was developing, we could see that happen. It wasn’t an overnight success, and most players aren’t, but he wanted to go elsewhere. But I like his development right now, I feel like we’re a big part of it and now Bacari and his staff and everybody has continued that trend.”

As for Bacari Alexander, the former Michigan assistant’s transition to the head job at Detroit hasn’t gone quite as well as Chatman’s.

He was suspended from the Titans’ bench without a stated reason on November 13, missing seven games before being reinstated on December 6th. Moreover, Detroit is 4-6 and could be near the bottom of the Horizon League this season.

Both Alexander and Chatman are, of course, familiar with Beilein’s system. That could give the Titans a leg-up tomorrow, though Beilein didn’t seem to think so.

“I think a lot of people have seen (the system), not from the inside like Bacari does. I don’t think you change a whole lot. It’s not what he knows, it’s what he can get his team to know. That will be the challenge and we pride ourselves on things — we have counters for everything. We don’t, but we like to think we do — but still, you gotta execute it.

“…I don’t think (terminology) changes, but we hide a lot of that stuff. I mean, they’ll call it, but between him and Kam and all the people around, you gotta stay one step ahead of everybody.”

Here’s a surprise: Michigan is currently a better defensive team than offensive team according to KenPom’s metrics.

That’s unlikely to last through conference play, however, the team has clearly seen some improvement defensively from 2016. The Wolverines have been especially adept at keeping teams away both the free-throw line and 3-point territory.

“I feel good and I feel bad,” Beilein joked. “The offense is my baby.”

Michigan ranks 13th in KenPom’s 3-point attempt rate allowed and 69th in its free-throw rate. Beilein teams have traditionally been solid in free throw rate, but less so in 3-point attempt rate. However, the Wolverines were top-10 in it last season. If that holds up over the long term, Michigan will always be a good enough defensive group to get by.

Sample sizes are limited and some regression is inevitable as the season continues.

If I had to say whether the defense is more likely to slip or the offense more likely to get better, however, I’d take the latter. Duncan Robinson’s 3-point shooting is likely to regress sooner rather than later — he’s at nearly 10 percent below his career average. Moreover, Charles Matthews seems to be finding a rhythm and the point guard rotation is sorting itself out. Even Zavier Simpson has had two solid offensive games in a row.

The defense won’t finish the year in KenPom’s top-35, however, the Wolverines are giving up the right kinds of shots and that is a good start.