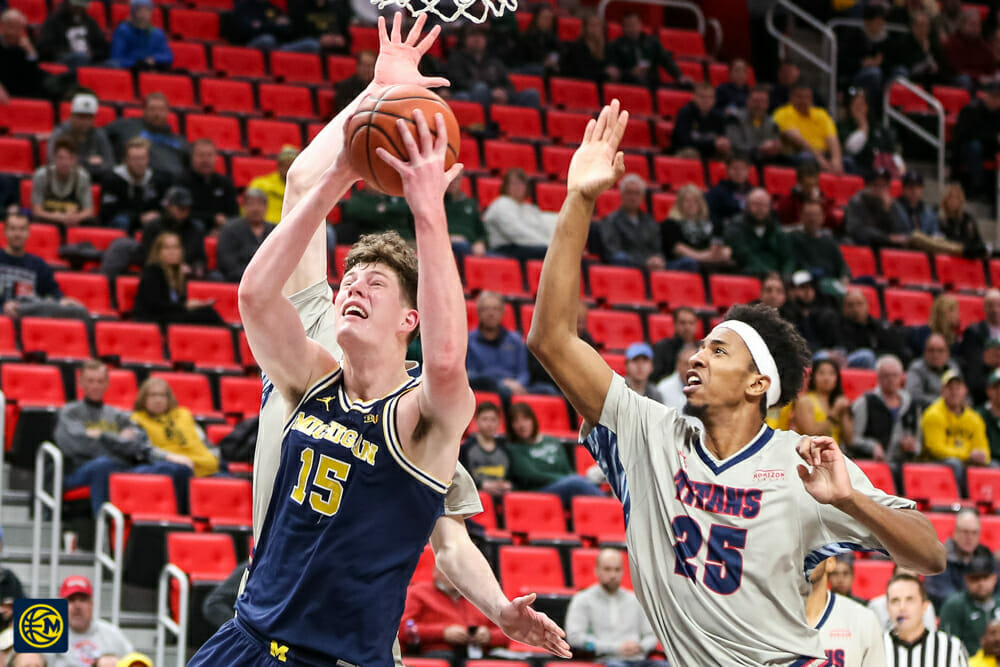 Neither player currently starts. But that hasn’t prevented Zavier Simpson and Jon Teske from taking on important roles for Michigan this year.

After facing a steep learning curve last year, the two sophomores from Ohio have made a clear impact on this year’s team.

The Wolverines aren’t the prettiest offensive unit yet. But, thanks in part to the efforts of Simpson and Teske, the defense is on track to be one of the best John Beilein has fielded in his tenure at Michigan.

That’s why the Wolverines didn’t miss Moritz Wagner against Detroit Mercy, a team they held to 19 points at halftime, and that’s why they won’t miss him when he sits out Thursday’s game against Alabama A&M with a bone bruise in his foot.

Teske has shown he can handle things just fine.

“He’s been phenomenal,” said Charles Matthews of the 7-foot backup center. “You’re not moving him. He’s a brick wall. He’s continuing to learn, continuing to embrace challenges and continuing to grow. Moe’s down, so it’s next man up.”

It helps when Teske has a point guard in Simpson who is consistently impactful on defense.

Simpson doesn’t get to use his size to his advantage in the same way Teske does. His ability on the defensive end comes from his energy. It comes from his ability to reach in deftly and pick the ball away without being whistled. Perhaps most of all, it comes from simple desire.

“He’s very prideful,” Matthews said. “He takes it personal, being scored on.”

That energy and pride has buoyed Simpson through this tumultuous season. He won the starting job. Then he lost it to a freshman. Now he comes off the bench — and still averages the most playing time of any point guard.

“Simpson was never just a cancer in the locker room, he never had negative energy,” Matthews explained. “So I give kudos to him, because he just continued to stay in the gym, continued to work, and he really embraced … coming off the bench and being that spark for us.”

Teske, meanwhile, has taken a similar path. Finding playing time hasn’t been easy, especially with Wagner entrenched as the starting ‘5.’ But when he enters the game, his defense often lends itself to making a positive contribution.

Wednesday afternoon, Beilein spoke about what makes Teske so imposing. Hint: it has to do with his size.

Last year, Beilein used Teske on the scout team to help teach players like Derrick Walton Jr. and Zak Irvin what to do when the defense switched on ball screens. Beilein jumped in the drill himself to show what he wanted. But there was just one problem. Beilein couldn’t see.

“I looked in, and I couldn’t see the basket,” he recalled Wednesday. “Jon was on top of me, and I couldn’t see anything. And that’s what he’s doing right now — he’s affecting shots without blocking them. And he’s been really good in ball-screen defense.

“Our ball-screen defense right now, is, the numbers are really good, and a lot has to do with how Jon has played it. I think he’s understanding how it all fits together better.”

According to Beilein, Teske has “really big, thick legs,” which inhibits his vertical jumping. But Teske’s legs make it difficult to move him down low, allowing him to “anchor in a little bit more.”

That’s a skill that Teske draws upon more often this year, Beilein says. Where as last season, Teske would sometimes back up and give up his inside leverage, this year he’s “inching into the ball.”

So Teske always had the size and the body type to affect shots. He’s just had to learn how to put those advantages to good use.

Of course, practice is where much of that development happens. Which means teammates like Matthews can end up on the receiving end.

When asked, Matthews said he couldn’t recall if Teske has blocked him in practice before. But that answer did change when pressed further.

“If it did happen, we’re turning the page from it,” Matthews said, laughing. “Ain’t talking about it. He probably snuck one in. Who knows.”