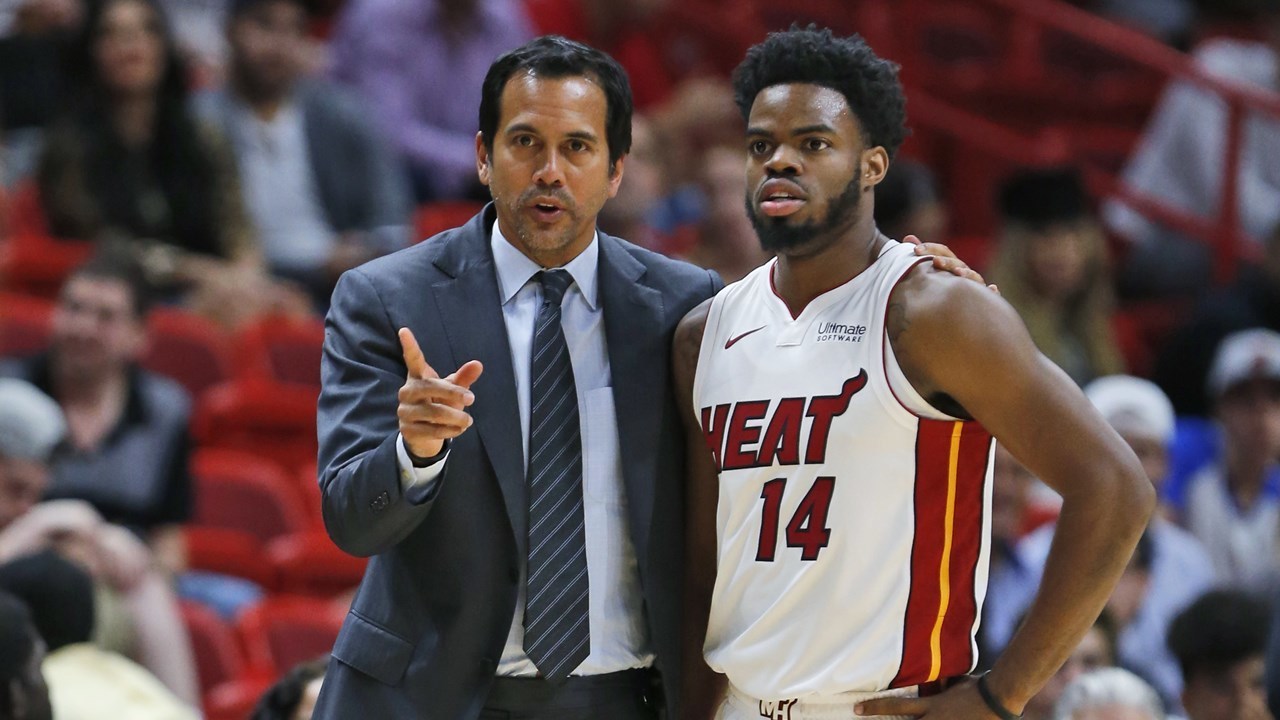 Former Michigan point guard Derrick Walton has found a role in Miami while former teammates Nik Stauskas and Caris LeVert have been reunited in Brooklyn.

After signing a two-way contract with the Miami Heat this summer, it took Derrick Walton Jr. a while to crack the rotation. Outside of some three or four minute stints in blowouts, the Michigan product couldn’t find playing time and was being funneled between Miami and G League Sioux Falls Skyforce.

Walton, however, has played at least 10 minutes in four of his last five games. More importantly, he’s played well, flashing adept skill as a passer and notching a career-high five assists against the Dallas Mavericks. In two games since then, Walton has had three and two assists.

There isn’t much of a sample yet when it comes to shooting — Walton is only 6-of-18 from the field this season, but 5-of-11 from 3-point range. However, he’s making good decisions with the ball and looks to be developing some chemistry with fellow rookie Bam Adebayo.

“He’s a heady player,” coach Erik Spoelstra said of Walton on Friday. “You can tell he’s been coached well. He’s a four-year player who’s been a winner. So you put him in these kind of circumstances, he can run your team. He’s a point guard. He knows how to deliver the ball. Some of the clever, savvy passes that he makes, you can’t teach those kind of things – the timing of those plays. You just know that he’s been the head of the ship many, many years.”

It’s worth noting that Walton’s two-way contract gives him only 45 days in the NBA. He’s used up over half of them already. After that deadline is hit, the Heat must choose between giving Walton a regular contract, keeping him in the G League, or waiving him. Right now, the audition seems to be going well.

Caris LeVert and Nik Stauskas together again in Brooklyn

Stauskas was part of the Nets’ deal for Jahlil Okafor, which sent both of them along with the Knicks’ 2018 second round pick to Brooklyn for Trevor Booker. The trade amounted to a flyer on Okafor, who has struggled in the NBA, for Brooklyn and unclogging the big man rotation for the Sixers. Stauskas reuniting with LeVert was an unintended, albeit fun, side effect.

LeVert (and, for that matter, Brooklyn) has emerged as a fun League Pass watch. Despite the Nets’ struggles, the Michigan product is a quietly great passer, notching a 22.1 assist percentage this season. That ranks in the 95th percentile among wing scorers, per Cleaning the Glass.

In Brooklyn’s recent game against the New Orleans Pelicans, LeVert notched seven assists, his third-best mark this season. Two of them went to Stauskas.

LeVert has been rounding into form of late, averaging 16.6 points, 7.6 assists and four rebounds over his past five games. He’s also heating up with his jump shot, shooting 53% from three during that span, after a slow start to the season.

Stauskas is doing exactly what you’d expect in Brooklyn: shooting the hell out of the ball. Though he fell out of the rotation in Philly, playing just five games with the Sixers, Stauskas is shooting 56.8 percent from beyond the arc in his first 10 games with the Nets. That’s obviously unsustainable, but Brooklyn is the type of place where Stauskas could thrive offensively: Kenny Atkinson’s squad ranks second in the league in 3-point attempt rate.

What determines whether or not Stauskas has staying power in Brooklyn will ultimately be defense. Nobody expects him to suddenly become a lockdown defender, but Stauskas needs to avoid being a liability.

Stauskas has struggled to find the right situation during his NBA career, bouncing between teams and coaches, but this is a real chance for the Michigan alum and Atkinson’s is an offense that makes sense for him.

Michigan’s only 2017 draft pick is having a rough go of it with the Bucks. Wilson has played in just 12 games, mostly seeing mop-up time.

He was assigned to the G League and recalled after one game last week. Wilson did play six minutes in Milwaukee’s loss to Charlotte last Saturday, the most he’s played in the month of December, but contributed just one rebound and one assist.

It’s worth noting that his lack of playing time is being blamed on head coach Jason Kidd in some corners of the Bucks blogosphere.

Make no mistake, however: Wilson has seen growing pains. He’s only attempted 9 shots and yet to record a block in 46 minutes of NBA action this year.

Former Michigan All-American Trey Burke has made the most of his time in the NBA G-League. Burke is averaging 27.2 points and 5.4 assists per game and has earned multiple G-League Player of the Week honors.

Burke was profiled by the G League website and discussed his career growth and starting from scratch.

I’m 25-years old and have a lot of basketball left in me. I still believe that I am one of the best scorers in the world, and that has to be my mentality. Everybody is entitled to their own opinion, but I believe that given the opportunity I could help a team win at the NBA level. I knew it wasn’t going to just be given to me, but I know that where I’m at in my career.

Sportando reported that Irvin signed a tryout contract with Hapoel Eilat on December 19.

The team has not played a game since then. They currently sit at 4-6 in the Israeli BSL. Their next contest, presumably Irvin’s debut, will be on January 4 at Ironi Nes Ziona.

Irvin left VL Pesaro, an Italian team, in September for personal reasons. A statement from the club at the time called his reasons for leaving “incomprehensible.”