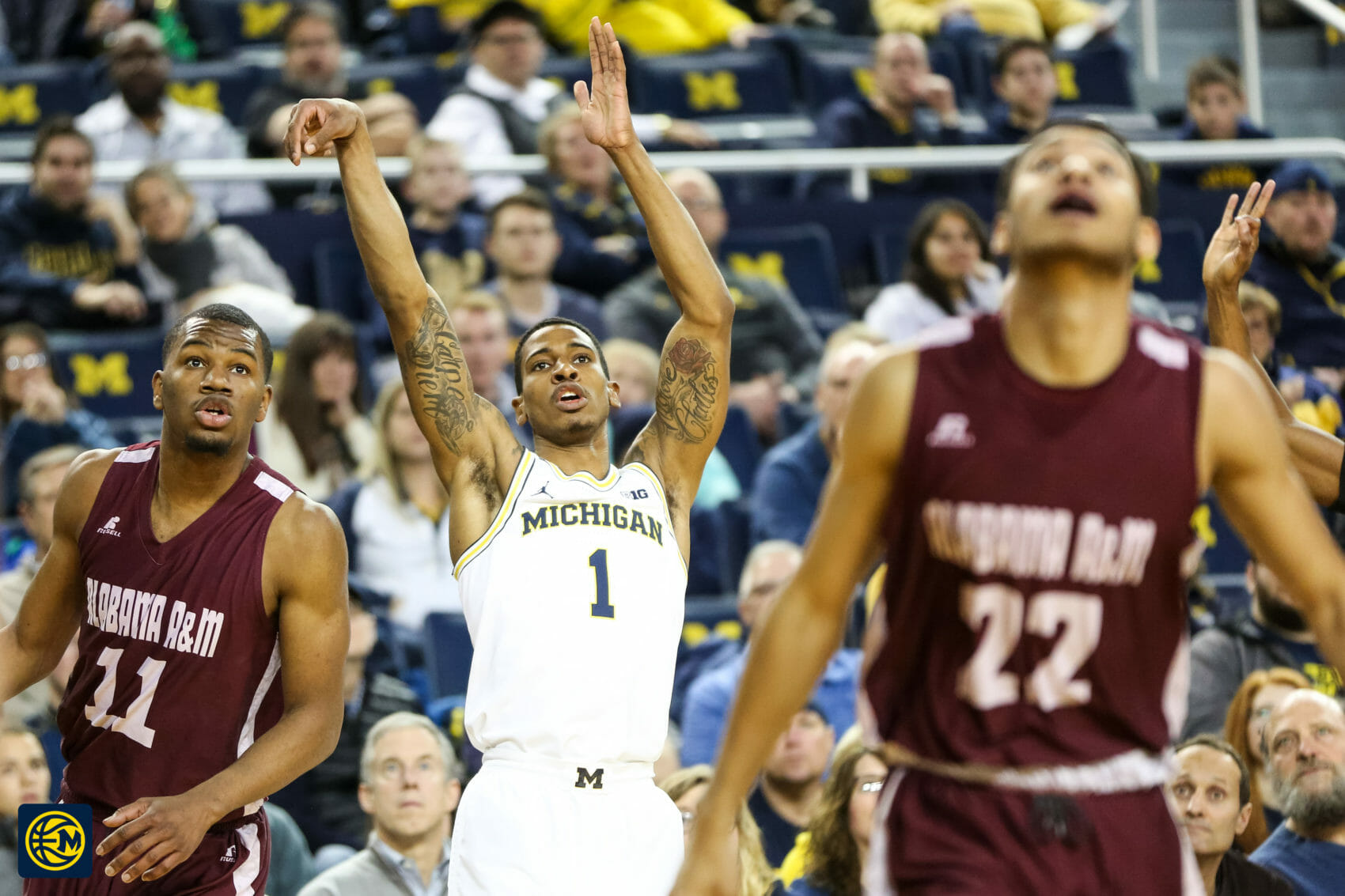 The last time Mcihigan and Illinois played a game, the Wolverines were wearing practice uniforms and ran the Illini out of the gym. The only time that John Beilein and Brad Underwood faced off in their careers took place a week later in Indianapolis when Michigan won a shootout in the first round of the NCAA Tournament.

They’ll face off in Ann Arbor on Saturday afternoon (12:00 p.m., BTN) for their only meeting of the 2017-18 season as Michigan looks for its third conference win of the year.

Illinois enters Saturday’s contest with a 10-6 (0-3 Big Ten) record and one quality win — over Missouri on a neutral floor — to its name. The Illini are ranked 89th nationally per KenPom and projected to finish 6-12 in the league.

Illinois is a hodgepodge of different players, styles and personalities that comes with a coaching transition. At the highest level, this team is similar to last year’s Illini squad. They are still much better on defense and struggle on offense, they just get there in a different style.

The underlying statistics behind Brad Underwood’s offense at Illinois are similar to his Division I-leading offense at Oklahoma State last year. The Illini attempt about the same ratio of twos and threes, shoot a similar percentage on twos, crash the offensive glass as effectively, assist an equivalent percent of their made baskets, get to the free throw line as often, and turn the ball over only slightly more often. There’s one significant difference: Illinois is shooting just 32% from 3-point range (275th) and Underwood’s team at Oklahoma State shot 40.3% (6th).

On defense, Illinois turns teams over as well as anyone in the country, forcing giveaways on just under 25% of defensive possessions. That aggressive play also leads to incredibly short defensive possessions (15.8 seconds, 18th nationally) and presumably a lot of easy baskets. Illini opponents are shoting 48.8% on twos and 32.3% on threes for a 48.7 effective field goal percentage. In their three Big Ten games, the Illini have allowed their opponents to shoot 55.4% inside the arc, 2nd worst in the conference.

Sophomore Te’Jon Lucas starts at point guard, but he’s been consistently outplayed by freshman guard Trent Frazier over the last few weeks. Frazier is averaging 16.2 points per game over the last six games while shooting 45% from 3-point range, Lucas has reached double figures once over the same span. Frazier shot just 12.9 percent from deep in his first 10 games of the year, but has turned things around and provides more reliable playmaking.

Redshirt junior big man Leron Black has elevated his offensive game during his fourth year in the Illini program. Black is an imposing physical presence who makes an impact on the offensive and defensive glass. He’s also shooting 53% on twos and is 7-of-17 (41%) from 3-point range and is one of the more productive post-up scorers in the Big Ten. He’s not a great 3-point shooter, but he is very comfortable from the mid-range and along the baseline and is learning to stretch defenses. 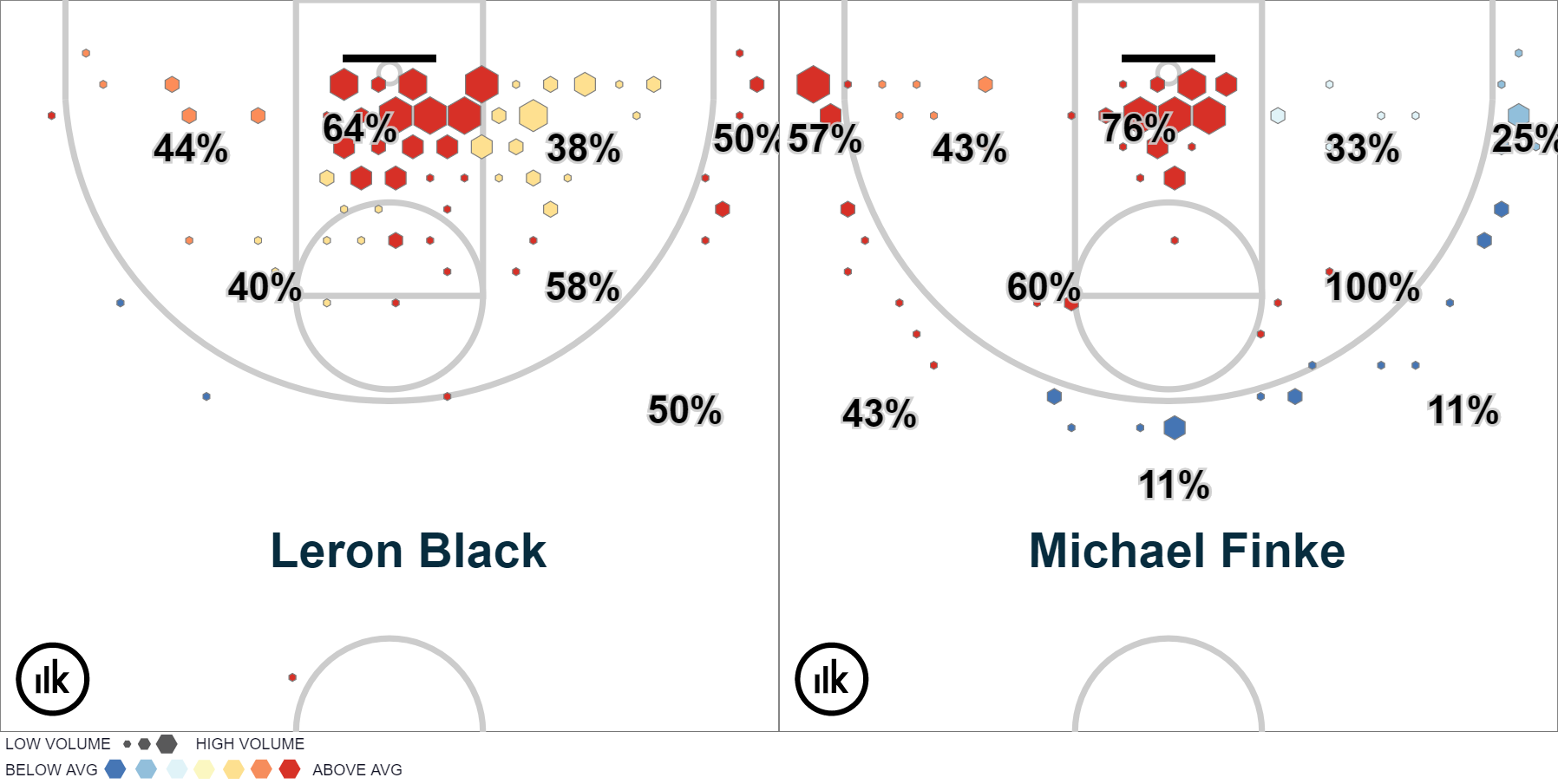 6-foot-5 junior Aaron Jordan is the perimeter shooting threat to track on the Illini roster. Over half of Jordan’s shot attempts are threes and he’s connecting at a 51.9% clip on 54 attempts. He’s a K-Y-P (know your personnel) guy that has to be ran off the 3-point line whenever possible. Jordan also bucks conventional wisdom as he’s not just a shooter, he’s great crashing the glass and grabbing offensive boards. 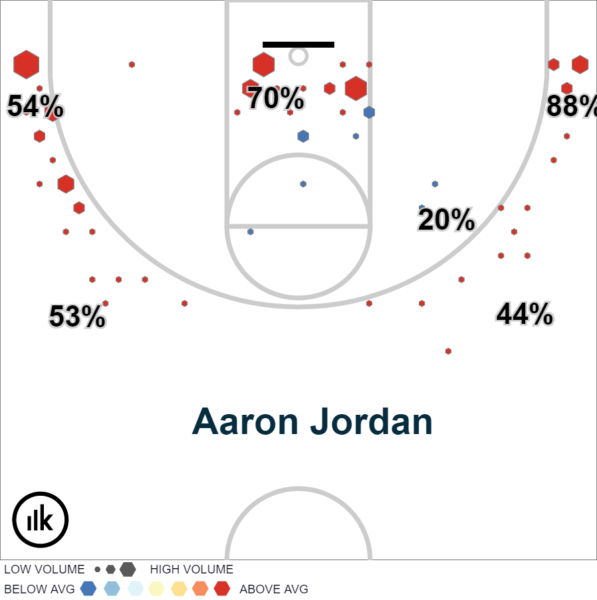 Junior big man Michael Finke attempts over 40% of his shots from 3-point range, but is only shooting 30% from deep (down from 41% a season ago). He’s improved his efficiency around the basket, making 61% of his twos, and he’s also a more aggressive offensive rebounder than you’d expect a stretch big man to be.

The Illini have bevy of slashing guards and wings around 6-foot-5 who can attack the basket, but can’t hit jumpshots. Freshmen Mark Smith and Da’Monte Williams along with graduate transfer Mark Alstork all fit into this bucket. All three players average around 20 minutes per game, shoot in the low 40s inside the arc, average at least a turnover per game, and are a combined 25-of-108 (23%) from 3-point range.

Sophomore forward Kipper Nichols played one of the best games of his career against Michigan in Champaign last year, but his playing time has dwindled in recent weeks after a quick start to his sophomore year. Nichols is a good athlete and aggressive rebounder who shoots 44% inside the arc and 39% from 3-point range who could see additional time against Michigan’s smaller lineups.

Detroit Jesuit product Greg Eboigbodin plays limited minutes backing up the five. He can block a few shots but has been foul prone and is shooting just 47% on twos.

Home games against teams projected in the bottom half of the league are important games with little to gain and plenty to lose. KenPom projects a 72-62 Michigan victory, giving the Wolverines an 83% chance of picking up their seventh win in a row. A win over the Illini would set Michigan up nicely for a huge week with games against the two premiere teams in the Big Ten: Purdue at home and at Michigan State.