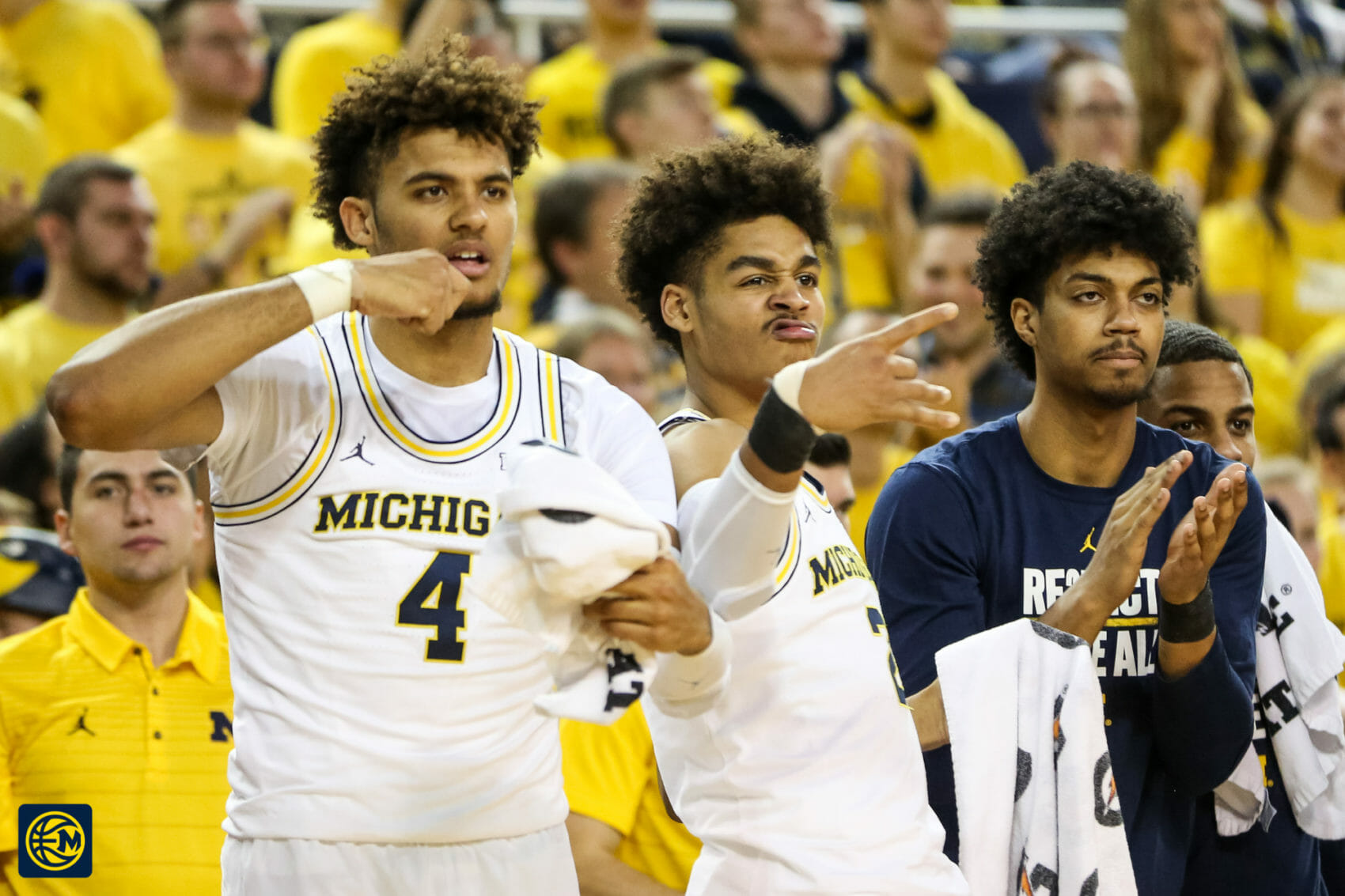 Isaiah Livers says he and his roommate, Jordan Poole, dream about games like Michigan’s 79-69 win over Illinois on Saturday afternoon.

Isaiah Livers says he and his roommate, Jordan Poole, dream about games like Michigan’s 79-69 win over Illinois on Saturday afternoon.

Livers had 12 points. Poole had 11. Perhaps it happened just as they’ve envisioned while hanging out in their shared dorm room.

Each provided offense at key moments. Livers led the team in scoring during an uneven first half, chipping in a personal 7-0 run that helped limit Illinois to just a three-point halftime lead even as Charles Matthews and Muhammad-Ali Abdur-Rahkman were held scoreless. Early in the second half, Poole drained two 3-pointers in the span of 40 seconds, giving the Wolverines breathing room as they began to pull away from the Fighting Illini.

“We needed a spark,” Poole said of his performance. “Obviously we came on in the first half pretty slow, and we needed to pick (it) up in the second half. Coach (Beilein) called my number, and I went in there and I did what I usually do.”

Of course, what Poole usually does is shoot. Before Saturday, he’d already scored double-digit points in five games. The freshman has not lacked confidence.

The same could not be said for his counterpart. But that appears to be changing — along with the complexion of this team.

“Each game,” Livers said, “I feel like I’m building more confidence as I go.”

A 13-point game and a 12-point game may not seem like paradigm-shifting performances. But for a John Beilein team, it does — simply because what a Beilein-coached team can achieve is often dictated by what a Beilein ‘4’ can do.

And Isaiah Livers can do a lot.

“Every day we’re seeing new things,” Beilein said. “… More rebounds, take it right at people and get to the foul line. Those are the three things that he’s working on now. But I’ll take what we got today.”

After the game, Beilein told reporters that if one had seen some of Michigan’s early practices, they might have questioned his decision to give Livers a scholarship, pointing out just how far the freshman had to go earlier this season. But Beilein was also adamant in saying he knows he did the right thing in pursuing and signing Livers.

The duo have worked together constantly to flatten Livers’ learning curve. According to Livers, he spends 15 minutes with Beilein after every practice, working through a conditioning drill and learning how to pivot correctly.

So yes, the freshman forward has very much been a work-in-progress. But it’s also clear now that significant progress has been made.

“I was thinking way too much a month ago,” Livers said. “Should I shoot this or should I pass this? But now I feel like Coach Beilein trusts that I have the green light to shoot the ball and go to the basket any time that I want to.

“Confidence is a huge thing. I admit it, it’s something I did not have at the beginning of the season. But I feel like now I just have a lot more swag to my game, a lot more confidence going out there.”

Poole, who called Livers his “right-hand man,” has been there every step of the way. Take, for example, Livers’ high-flying, second-half alley-oop that electrified the Crisler Center crowd.

Livers said after the game that Poole wanted to redeem himself for a missed opportunity earlier this season, when a drawn blocking foul wiped out a no-look alley-oop to Livers.

So when the two made eye contact near half court after Poole received a pass from Jaaron Simmons, it was clear they both had the same thing in mind.

Added Livers: “I knew at half court he was going to slow down and throw it up.” 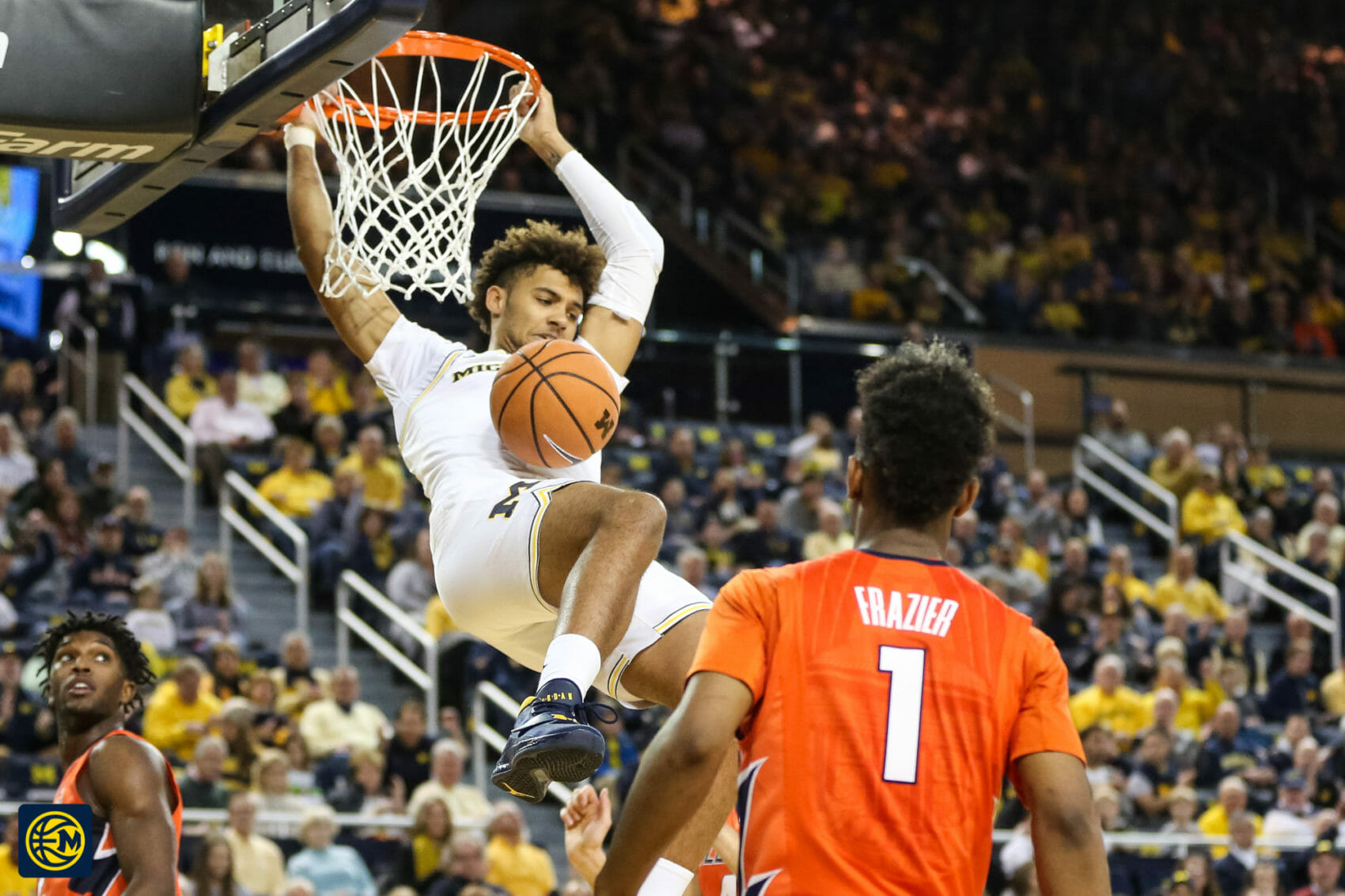 The alley-oop showed what Livers can do athletically. A different — albeit less flashy — play showed how far he’s come mentally.

At some point in the first half, Livers noticed his man would leave him for Moritz Wagner or Jon Teske, leaving Livers wide open.

“We had a turnover, I’d seen that, went down and told Jon Teske,” Livers recalled. “I was like, ‘Hey watch, my man’s coming to you so I’m going to cut back door and it’s going to be wide open.’ ”

Sure enough, it was there, as Livers had seen. Teske found him along the baseline. Livers did the rest.

It’s moments like these that show how much Livers has grown — things that might have passed him up earlier this season. But he sees them now, and that gives his coach the ability to do so much more.

An early glimpse of that came near the end of the first half, when Livers shared the floor with Duncan Robinson, the starting ‘4.’ It’s a lineup that the Wolverines have worked on in practice— but one that couldn’t see the floor until its key component was ready.

“I think it’s now I have a lot more confidence and I’m playing a lot better,” Livers said when asked about the lineup. “You’ve got to have trust from your head coach.”

For now, Livers will continue to work on pivoting with his right foot, landing with both feet in the paint and being more aggressive on offense. And as he does, there may be plenty more moments like the one after Saturday’s game, when his roommate — wide grin and all — pretended to join other reporters in interviewing Livers, putting to life what a pair of freshman roommates have dreamed of doing together all this time.