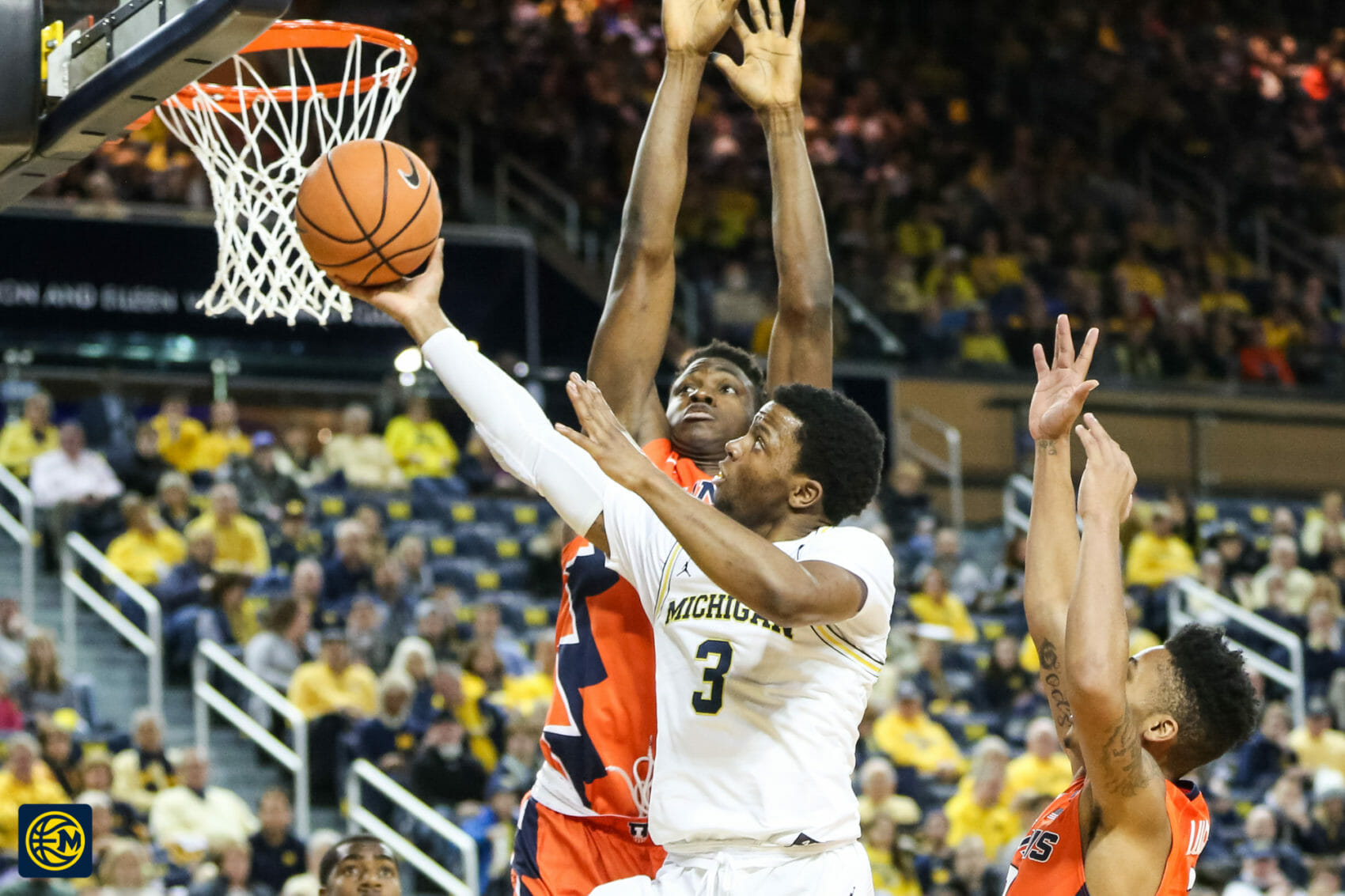 Michigan got some momentum heading into perhaps its toughest stretch of the regular season with a 79-69 win over Illinois. Here are five takeaways.

Michigan got some momentum heading into perhaps its toughest stretch of the regular season with a 79-69 win over Illinois. Here are five takeaways.

Zavier Simpson takes the starting job, and keeps it

After starting the second half at Iowa earlier in the week, Simpson started the game on Sunday. Though the offense stalled early with him at the helm, the sophomore ended up playing the entire second half.

Though the offensive output won’t knock anybody out, Simpson finished with seven assists and the offense itself was humming throughout the second half. He flashed a drive-and-kick game that has clearly improved since the start of the year and looked adept against the Illini’s zone-press.

‘Today, against these guys, you gotta be a bowling ball,” John Beilein said he told Simpson. “‘Man, you gotta get low and you gotta drive hard at the basket.'”

“And it worked sometimes for him. He did a good job with that. And then seeing the open man, I think we missed some really good 3s too that he created. Maybe he would’ve had 10 assists.”

As for the rest of Michigan’s point guard corps, Eli Brooks played just four minutes on Saturday, though we did get a rare Jaaron Simmons sighting in the first half. The backup point guards turned the ball over three times and missed three shots in a combined eight minutes.

After playing the entire second half though, it seems the job is Simpson’s to lose.

“I don’t think it’s cemented, but I would love to get that cemented,” Beilein said. “I would love to do that, but I’m not gonna go there yet. I just thought in this particular game, we needed a downhill, strong driver…Today was a better game for Jaaron and X until Eli develops this downhill mentality we need him to have.”

In two games since returning from the injury he sustained at Texas, Wagner looked, well, injured. He shot just 3-of-7 against Jacksonville and 2-of-6 at Iowa, his two lowest scoring outputs of the year.

On Saturday, he put that to rest. Wagner knocked in his first 3-pointer from after Illinois’ defense lost track of him toward the end of the shot clock and went from there. Though that was the only shot Wagner hit from beyond the arc, he went 6-of-7 on the game for 14 points and pulled down seven boards. He looked good in the post on the offensive end and as a screen-setter. He even finished a lob late in the game, a notable milestone for a player coming off a foot injury.

“When (shooters) have a bad game, it’s like they had 10 bad games in a row,” Beilein said. “And Moe hadn’t been able to make 3s in games, or he’d been out. He hadn’t had the feel and for him to make the first 3 and then just catch the ball, and no drama on those layups. He just turned and put it in. Earlier in the year, he would turn that into something that isn’t healthy for his scoring. So he just kept it simple.”

If there was ever a week Michigan needed Wagner at his best, its this one. The Wolverines will go up against two of the top-five teams in the country by KenPom’s rankings. Wagner will have his hands full with Purdue’s Isaac Haas and Michigan State’s Jaren Jackson, but this game seemed to affirm his general health.

“You see in practice, he’s getting better and better every day,” said Muhammad-Ali Abdur-Rahkman. “You just don’t want to rush it.”

Michigan struggles after Charles Matthews gets in early foul trouble

Matthews drew a whistle for a foul after turning the ball over seconds into the game. In keeping with his regular practice from this season, Beilein pulled him immediately.

When Matthews came back in around the 14-minute mark, it took him just over a minute to be called for a second foul, a call Beilein was unhappy with to say the least. Beilein was furious at referee Bo Boroski — the same ref that gave him a technical in 2014 at Michigan State — thanks to a bevy of ticky-tack fouls.

“(Matthews) got taken outta there quick, didn’t he?” Beilein said. “Not gonna comment on that.”

Ironically, the Wolverines ended the first half with fewer fouls than the Illini. However, there’s no doubt those calls took Michigan out of rhythm at the game’s start. The Wolverines went down 21-13 at one point, finishing the first half down three after Isaiah Livers sparked a run.

Matthews scored an efficient 10 points on perfect shooting from the field in the second half after being held out for 19 minutes in the first. This isn’t the first time he’s gotten into early foul trouble though. He got the same quick hook last month against Indiana, ending with eight points against the Hoosiers. Against better teams, Michigan will struggle to survive without their best scorer.

Turnovers lose games, and win them

In addition to foul trouble, it was turnovers that kept Illinois in the game for so long. The Wolverines had 12 in the first half — more than they’ve had in all but two games this season. (Those two games were against Jacksonville and Alabama A&M.)

Everybody from Matthews, to Wagner, to Simpson was at fault. Michigan didn’t have an answer for the Illini’s zone-press.

We tried to simulate it for the last two days,” Beilein said. “And our scout team just doesn’t have that length and that quickness. So it hit us right in the face and then we had to react to it.”

The Wolverines settled down in the second and reaped the rewards. Michigan turned it over just three times in the latter half, forcing eight giveaways of their own.

“I didn’t go in there (at halftime) ranting and raving,” Beilein said. “I just said, ‘I feel in a really good place that we’re down three right now.’

In that, he was correct. Despite pulling back toward the end of the period, the Wolverines simply didn’t play well early in the game. To go into the locker room down by just three against an inferior opponent was a gift enabled by timely bench performances.

Nobody will mistake Michigan’s second-half for its best performance either. But against the Big Ten’s bottom-dwellers, it was enough for a relatively comfortable win.

Ever-so quietly, the Wolverines are doing a great job keeping teams off the offensive boards. After Saturday, they’re 15th in the country in defensive rebounding rate, per KenPom, at 76.4 percent.

“I don’t think there’s anything pretty about how we’re playing,” Beilein said. “At the same time, we’re finding ways still to get out in front of people and win games.”

Right now, the proof is in the pudding when it comes to Michigan’s defense. Last year, the Wolverines were 212th in defensive rebounding percentage, per KenPom. This is a dramatic improvement and given that conference play is still in the early goings, it’s worth being cautious.

However, Wagner looks to have undergone real improvement in that area. And Jon Teske has sucked in 11.3 rebounds per 40 minutes with a huge uptick in minutes. Michigan State — the No. 2 offensive rebounding team in the country — will provide the ultimate test a week from now.