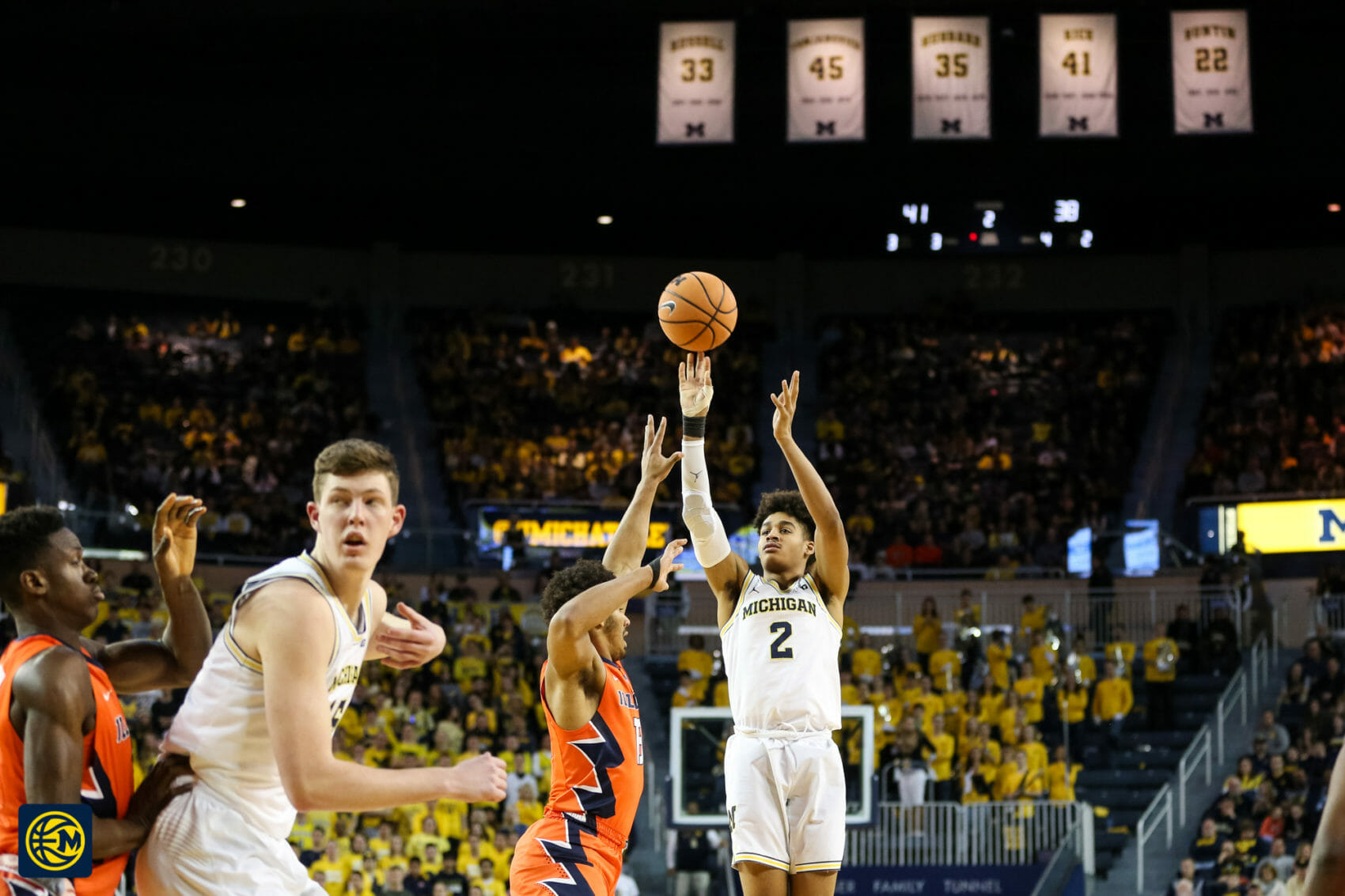 It wasn’t always pretty, but Michigan picked up another conference win Saturday afternoon.

The Wolverines shrugged off some early first-half struggles before several second-half runs allowed them to pull away. Here are five key plays from Michigan’s 79-69 win:

Did you think we’d lead with anything else?

This wasn’t only just a highlight-reel play between the freshman duo of Jordan Poole and Isaiah Livers, who combined for 23 points against Illinois. It sparked some life into the Wolverines.

Fittingly, the game-changing play began with some good defense. Moritz Wagner contested a fast-break layup at the rim, forcing a miss. Jaaron Simmons skipped the ball down to Poole on the left wing, who said after the game that he and Livers knew what to do after making eye contact near half court. It was a picture perfect pass and a picture perfect finish, and it also gave Michigan its first lead since the 17:02 mark of the first half.

The freshman forward earns the top two spots after his performance Saturday. Between 6:35 and 5:22 of the first half, Livers single-handedly erased Illinois’ eight-point lead. First, he drilled a 3 to cut the lead to five. Then he dunked on consecutive possessions to cap off a personal 7-0 run, seemingly snapping Michigan out of its early funk.

Livers now has 25 points in his past two games, easily the best stretch of his young career.

“Confidence is a huge thing. I admit it, it’s something I did not have at the beginning of the season,” Livers said.“But I feel like now I just have a lot more swag to my game, a lot more confidence going out there.”

After some back-and-forth play between the two teams, it was Michigan’s center — still struggling with a foot injury — that propelled his team past Illinois. Wagner finished through contact, drawing a foul, before completing the and-one opportunity to retake the lead — a lead the Wolverines would not relinquish for the rest of the game. Then, he finished in transition after a bullet of a pass from Zavier Simpson.

Poole finished the game with 11 points, five of which came on free throws.

The other 6? Well, they came in a span of just 40 seconds, between the 14:53 and 14:13 mark of the second half, as Poole drilled two consecutive 3s to help Michigan continue building its lead over Illinois.

The first was perhaps ill-advised, as Poole pulled up off the dribble and took a relatively contested shot. But it sank through cleanly. His second came late in the shot clock on a find from Simpson, who finished with seven assists, and gave the Wolverines their biggest lead of the game up to that point.

“We needed a spark,” Poole said.“Obviously we came on in the first half pretty slow, and we needed to pick up in the second half, and coach called my number and I went in there and I did what I usually do.”

Part of the reason why Michigan struggled in the first half was because its leading scorer played just 1:22, thanks to early foul trouble. Just 16 seconds into the game, Matthews got tangled up with an Illinois player by the visiting bench. The Fighting Illini staff gestured widely, a referee in the vicinity blew his whistle, and John Beilein promptly yanked his star wing out of the game.

But just over a minute later, he picked up an offensive foul — a call that drew the ire of the home crowd — and left the game, scoreless, with 13:07 left in the first half. Matthews would not return until the second half.

Combined with a passive first-half from Muhammad-Ali Abdur-Rahkman, who was held scoreless over the first 20 minutes, and it was no wonder why Michigan needed Livers’ early outburst so badly.