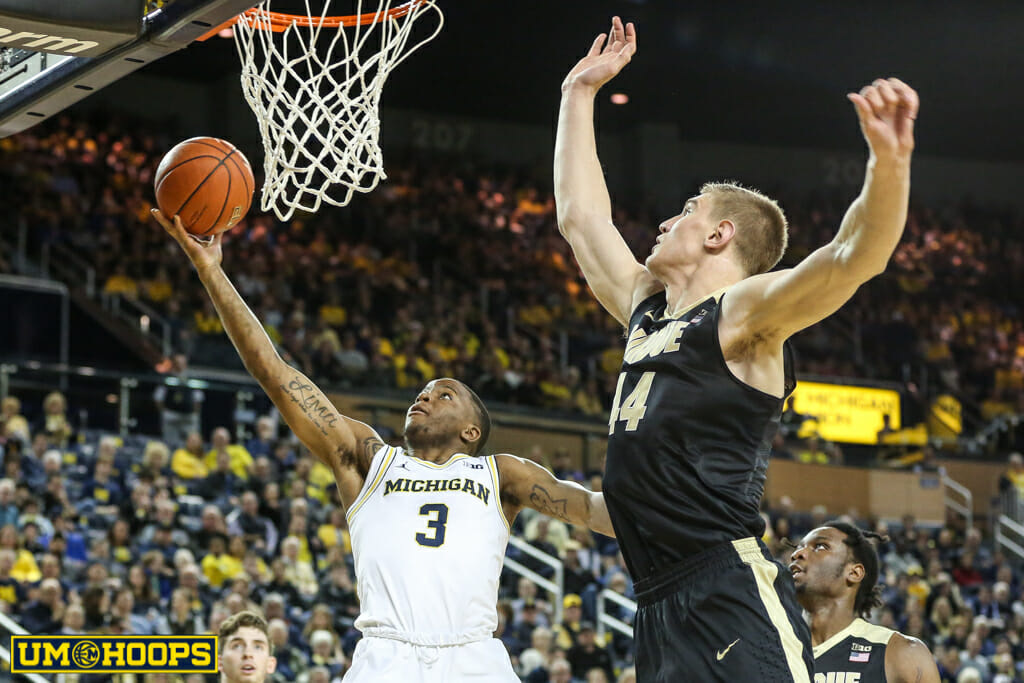 Michigan will host its highest profile home game of the season tonight as it welcomes Matt Painter and Purdue to the Crisler Center (9 p.m., ESPN).

Michigan will host its highest profile home game of the season tonight as it welcomes Matt Painter and Purdue to the Crisler Center (9 p.m., ESPN).

The Wolverines have won four straight home games against Purdue and will be searching for a rare resume building win in a Big Ten that is lacking on high-level talent.

Purdue lost Big Ten Player of the Year Caleb Swanigan, but returns four starters from the team that won the Big Ten by two games last season. Losing Swanigan and his near-automatic double-double is a critical loss, but in many ways the Boilermakers match up better with the Wolverines this year while playing a four-out offense by default and still having imposing size inside.

The Boilermakers start four seniors and are one of the most experienced teams in the country. They also had the opportunity to play as a team in the World University Games this summer which provided significant extra time to play and practice. Entering tonight’s game with a 15-2 record, Purdue is undefeated in the United States with their only two losses coming at the Battle 4 Atlantis, but the Boilers have only played two road games: wins at Marquette and Maryland.

Purdue is ranked 9th nationally in adjusted offensive and defensive efficiency and checks in at No. 5 overall according to  KenPom.

The Boilermakers are known for their imposing size inside, but their perimeter shooting is actually what makes this team so dangerous. Purdue is shooting 56.3% on twos (21st) and 40.8% on threes (18th) for a 58.2 effective field goal percentage (11th). In league games, Purdue is ranked 3rd in the league of percentage of shot attempts from 3-point range and will surround Isaac Haas with four competent 3-point shooters at any given time. 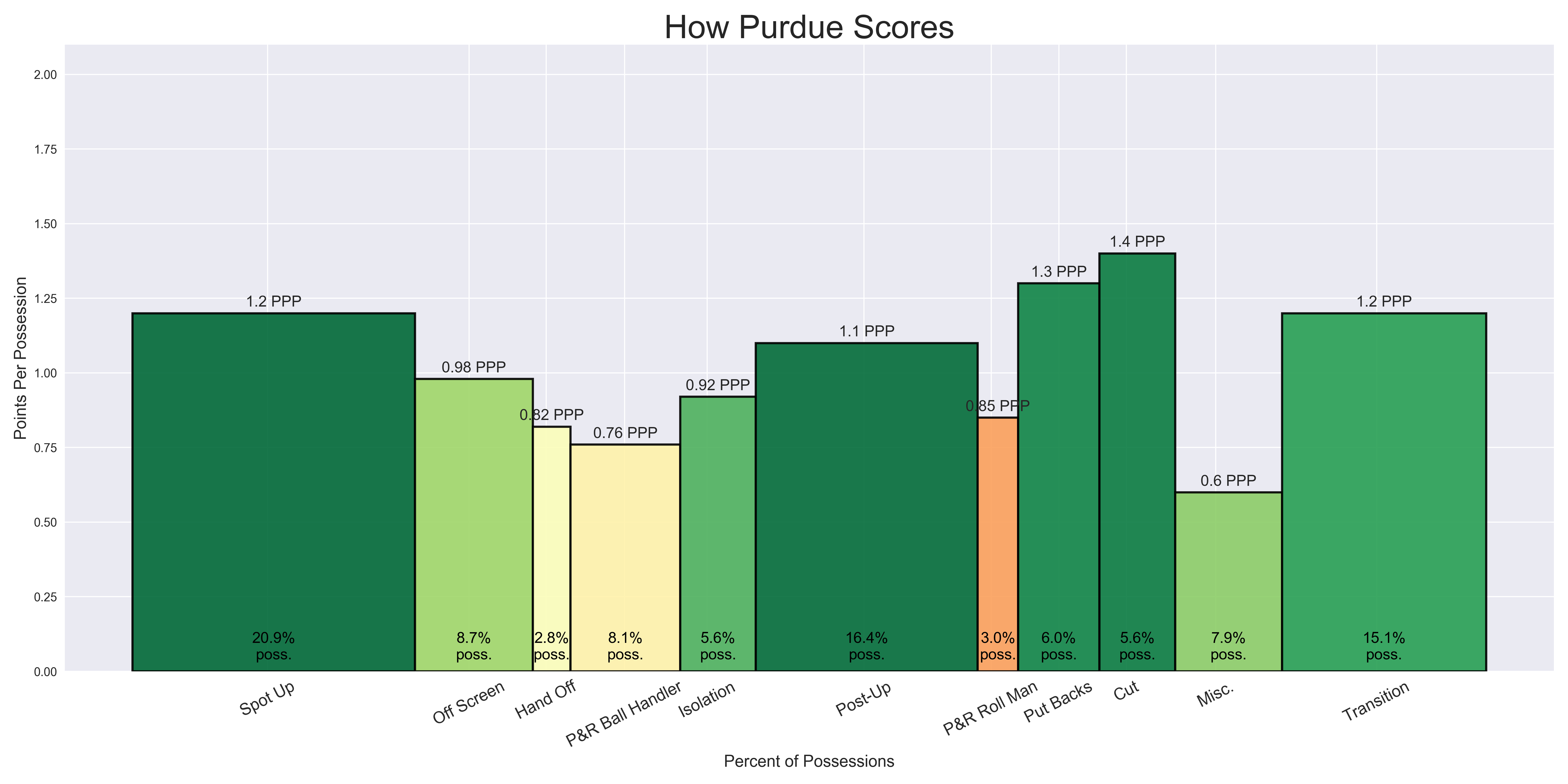 Only 7 teams in the country are more efficient with their post-up offense and only five teams throw the ball into the post more than Purdue (coincidentally, two of those 5 teams are in the Big ten: Iowa and Wisconsin). Michigan brings the 2nd worst post-up defense in the Big Ten to the table and will have to figure out solutions to defend Purdue’s massive front line.

Purdue is ranked 6th in the country in effective field goal percentage defense, allowing its opponents to shoot 40.7% on twos (5th) and 31.7% on threes (46th).

The Boilermaker defense also stands out for how few assisted field goals it gives up, only 50% of makes against the Boilers in Big Ten play have been assisted, the lowest rate in the conference. Scoring against Purdue’s stout defense generally requires making a play, not running a play.

Sophomore guard Carsen Edwards is one of the most improved players in the Big Ten. Edwards has improved his efficiency — shooting 59.5% on twos and 35% on threes after making only 41% of his twos as a freshman. His passing numbers are up, turnover numbers are down and he’s getting to the free throw line more often. He’s at his best when he’s attacking from the right side of the floor at all three levels. 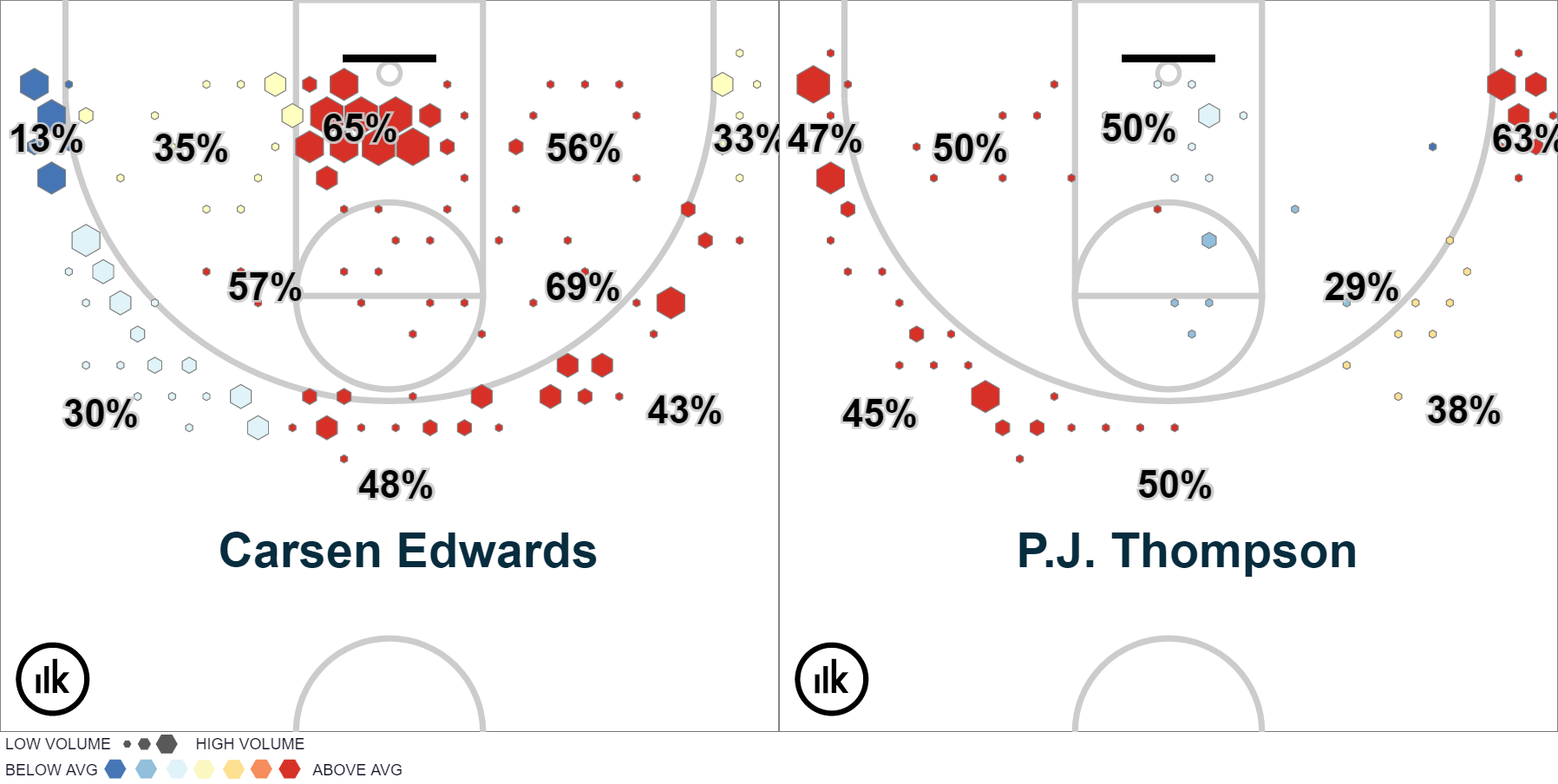 5-foot-10 senior PJ Thompson starts at point guard for the Boilermakers, but that designation has more to do with his size than role. Thompson is on the court to space the floor — 71% of his shots are threes and he makes them at a 49% rate — rather than create offense. Thompson ranks 6th on the roster in ball screen possessions used and his 11.2% assist rate trails the three other starters other than Haas.

Isaac Haas has replaced Caleb Swanigan in the starting lineup and has only become more efficient with additional playing time.  Haas has been one of the most efficient post-up scorers in the league for a couple of seasons now and he’s been even better this year. The big man is shooting 64% on twos and draws 8.2 fouls per 40 minutes. He’s also an imposing presence on both backboards and protecting the rim.

Dutch freshman Matt Haarms has been one of the most intriguing new pieces in the league. He’s ranked 5th nationally in block rate and provides elite rim protection at 7-foot-3, 250 pounds. Haarms is a better defensive player than offensive player, but he’s a great finish and will attempt the occasional mid-range jumper (a shot that is probably best to let him have right now). 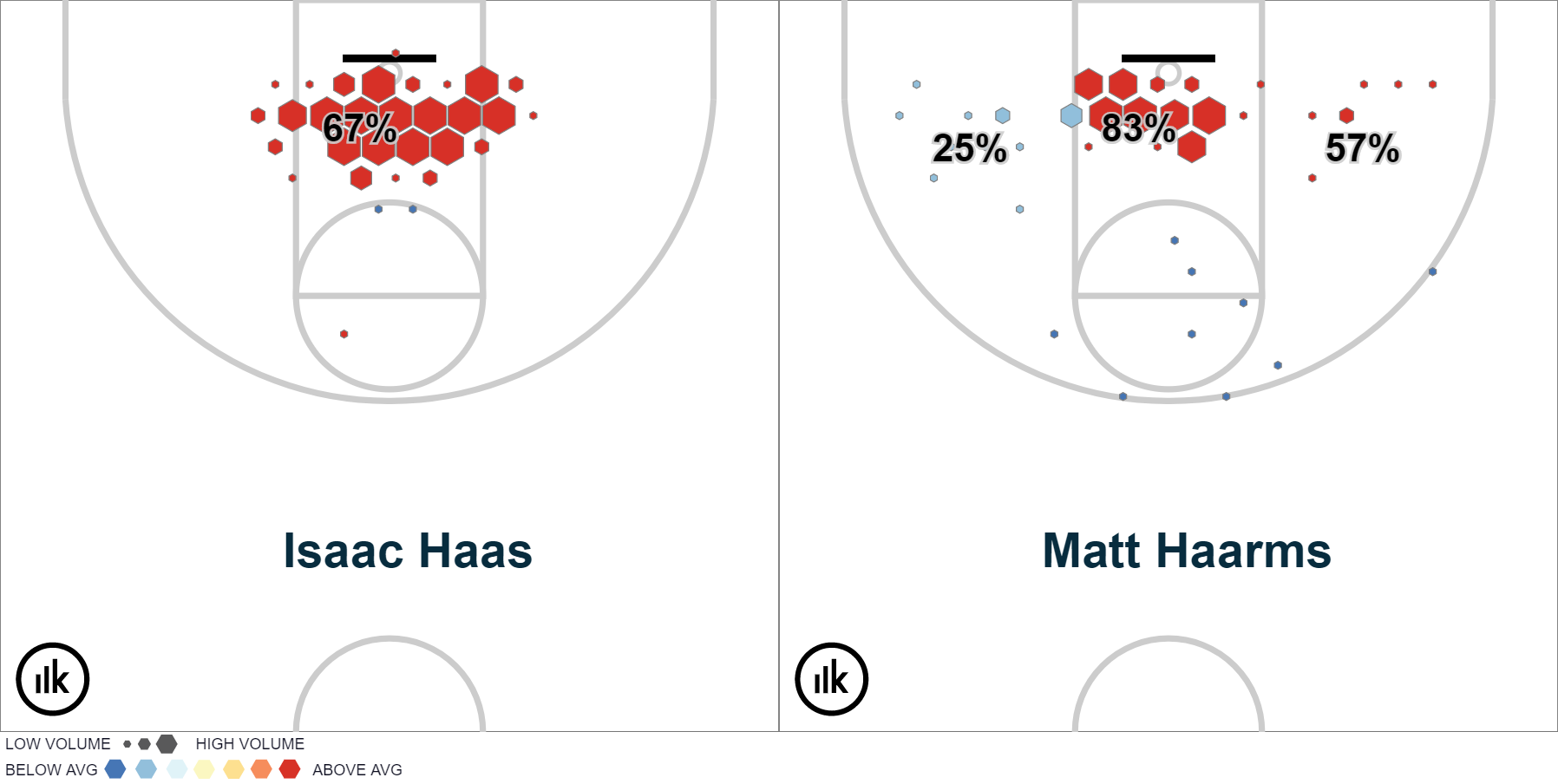 Vincent Edwards is a do-it-all four man who has been a key contributor for the Boilermakers for four years. He’s a career 51% shooter inside the arc and 39% from outside and his numbers this season are right around there. His assist numbers are down a bit as he’s playing the four full time, but he’s also having the best offensive rebounding season of his career.

Dakota Mathias is essentially the perfect three-and-D wing at the Big Ten level. Mathias was an All-Big Ten Defensive performer last year, he leads the Boilermakers in assist rate, shoots 46% from three and 53% on twos and doesn’t turn the ball over. He has a 50-50 shoot vs. pass split in ball screen action and does a great job of finding his teammates with a screen to use. 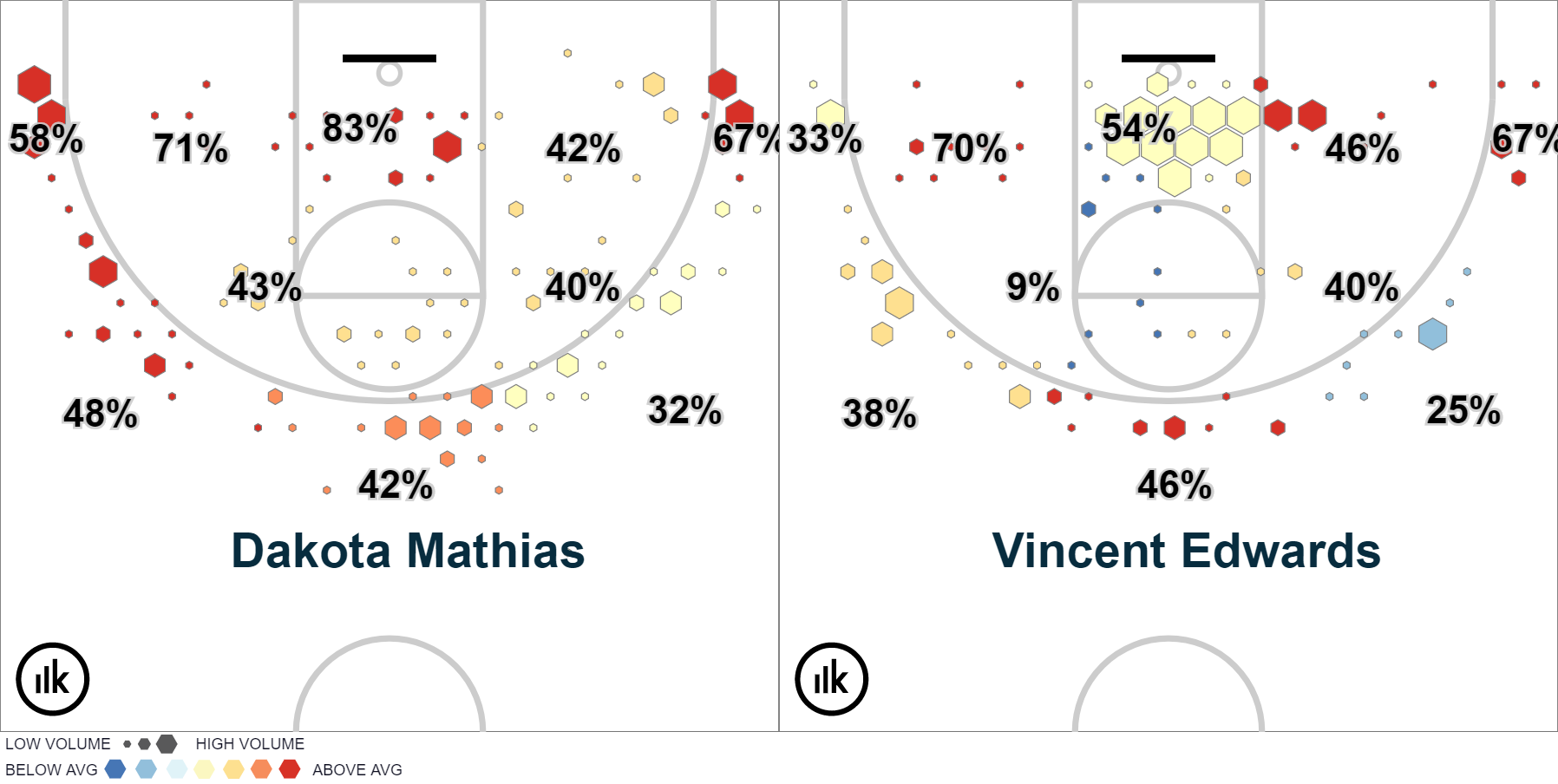 Ryan Cline is Purdue’s best shooting option off the bench. The 6-foot-4 junior is a career 40% 3-point shooter and is very comfortable shooting off the move. His assist numbers have also improved this year.

Freshman guard Nojel Eastern has struggled to adjust to the college game. He’s carved out a rotation role, but is shooting just 53% on twos, 29% on threes and turning the ball over on a third of his offensive possessions.

For as little hype as they’ve received nationally, the Boilermakers are a very good. The disappointing trip to the Bahamas probably explains why they’ve flown under the radar, but I’d expect Purdue to be in the Big Ten Championship mix all year. Michigan hasn’t lost to Purdue at home since 2012, a span that featured some very good teams, but this will be a difficult challenge. KenPom projects a 68-66 Boilermaker win, but gives Michigan a 41% chance at the home upset.