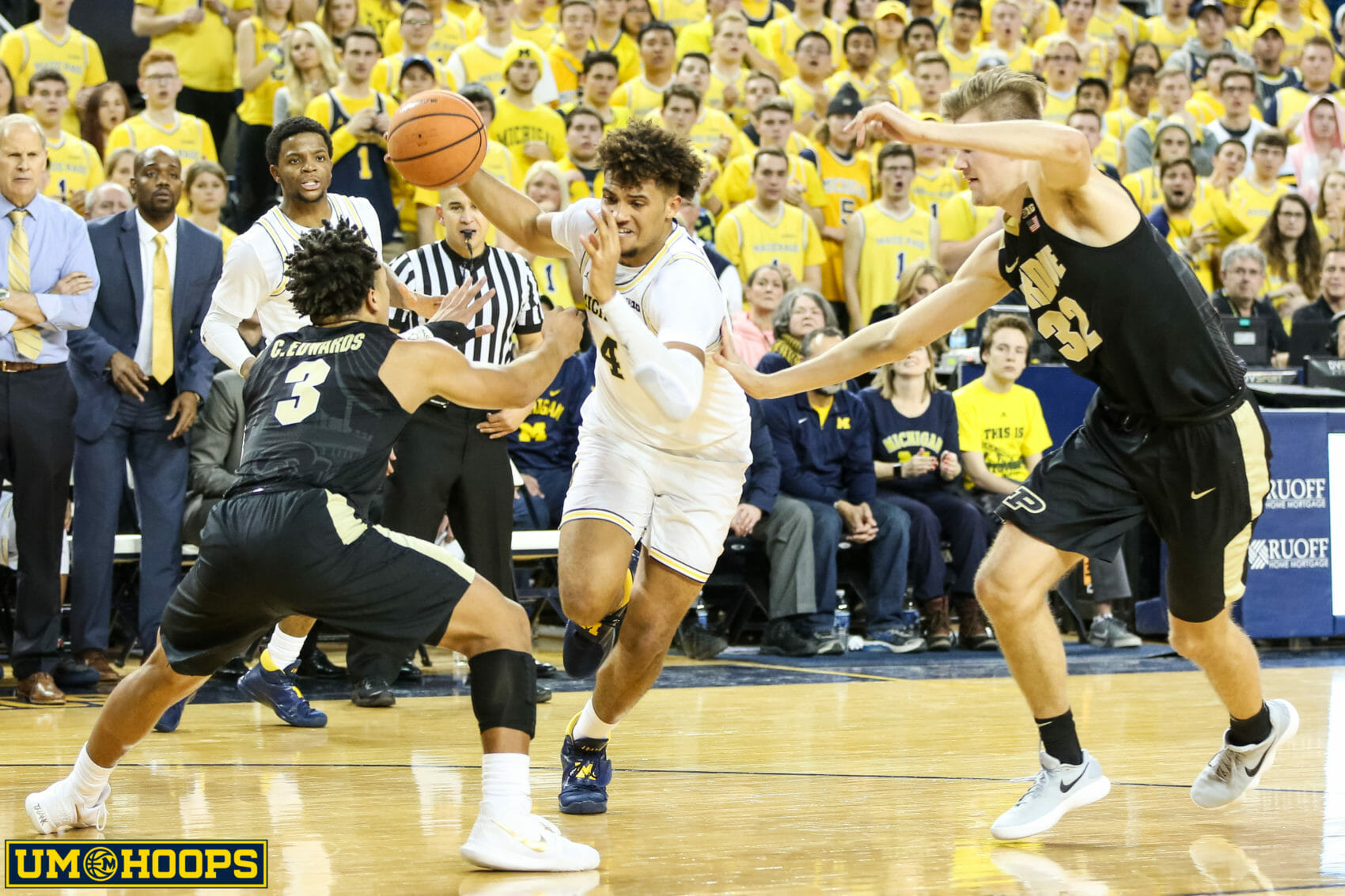 Here are Five Key Plays from Michigan’s loss to Purdue.

It was all in the cards.

A second-half comeback. A much-needed win over a top-25 ranked opponent — the nation’s fifth-ranked team, for good measure.

Then the whistle blew.

Michigan suffered a crushing 70-69 defeat at the hands of No. 5 Purdue on Tuesday night. The two teams went back-and-forth for much of the second half after the Boilermakers initially built up an early lead. Yet despite the Wolverines’ best efforts, Purdue escaped with a win, and Michigan was left to watch Isaac Haas celebrate after the buzzer sounded.

Heading into the game, much was made about the matchup between both team’s centers. Isaac Haas, a 7-foot-2, 290-pound beast, would be a difficult matchup for the slimmer Moritz Wagner down low. Wagner, a formidable offensive threat in his own right, would be quicker than Haas.

The two would slow down as other cast members began chipping in and in many ways their mere presence on the floor changed the opponents’ gameplan. Michigan always worrying about denying Haas the ball in the paint and Purdue switching every ball screen to prevent Wagner from getting loose.

It seemed as though the Boilermakers couldn’t miss from 3-point range early — and that’s because they couldn’t. Purdue started off 5-of-5 from behind the arc, thanks mostly in part to the efforts of Dakota Mathias.

The guard was electric early on. He hit a 3 off the dribble. Then he drilled another (after missing his team’s first of the night) to cap off a stretch of eight straight Purdue points to give his team a 14-point lead. Of course, Mathias would feature in a much more important play later on, forcing a turnover that gave his team possession with just over six seconds left.

3. Michigan finally gets all the way back

After a trio of Jordan Poole free throws cut the Wolverines’ deficit to only one point with 12:13 in the second half remaining, it seemed inevitable that Michigan would tie the game or take the lead — perhaps even soon after Poole’s trip to the line.

Yet it would take several more minutes of back-and-forth play before that happened. And when it did, it was thanks to one of Michigan’s streakiest outside shooters. With 7:29 left, Zavier Simpson penetrated the defense and found Charles Matthews over by the corner.

Matthews squared up and let it fly. The ball sank through, tying the game and officially completing Michigan’s comeback.

If one had offered people a bet before the game that stated Michigan’s point guard would nearly match the output of Carsen Edwards, who entered the game averaging 16.8 points per game, most would’ve taken Edwards.

Yet that’s exactly how Tuesday’s game turned out — especially late in the second half. After Edwards sprinted full-speed around a screen to drain a 3, breaking a tie, many might’ve suggested it would be Wagner or Matthews to respond. But it was Simpson who did instead, hitting two open 3s to give Michigan its first lead of the game with 4:40 left.

Purdue’s gameplan was designed to force Simpson to win the game and, as Painter put it afterward, he almost did.

The officials’ decision to overturn a late call against Michigan may certainly be debated, but one thing may not be so debatable: the Wolverines struggled to find quality shots late in the game, when they had plenty of chances to win.

Before Matthews’s late heave that nearly found net, Michigan finished with three consecutive empty possessions. After Vince Edwards’s tying 3-pointer, the Wolverines missed a chance to take the lead when Simpson’s jumper clanked iron. Then, after a timeout at 1:16, another possession went to waste as Michigan failed to move the ball around.

Beilein had called a timeout before Abdur-Rahkman’s missed jumper, and opted not to do the same in the final seconds because of Purdue’s defense out of the timeout.

“I didn’t want to call a play late because they blow up so many plays,” Beilein said. “That’s why we just get the ball to Charles’ hands, try to get him to the middle of floor…and just go. I just didn’t feel good in anything I was going to call. Matt’s really good at saying, ‘He ain’t touching the ball,’ and now you have to go somewhere else.”

Matthews got some leverage just as Beilein had hoped, but Mathias managed to knock the ball free and give the ball back to Purdue after an extended video review.

The Wolverines may have been the victims of some tough calls down the stretch. But they certainly could had their fair share of chances to win the game and render any whistles moot.