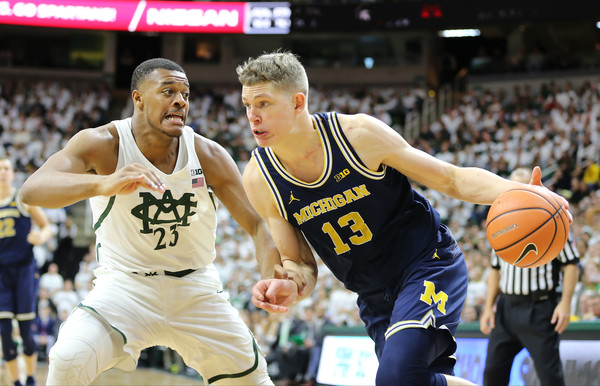 EAST LANSING — John Beilein wasn’t even sure if Moritz Wagner would play against Michigan State.

Two days ago, Michigan’s second-leading scorer reaggravated the right foot injury he had originally suffered against Texas on Dec. 13. Because of the timing of the injury, Beilein didn’t know if his star center would be able to go against the Spartans.

There was no uncertainty on Wagner’s end, though.

“That stuff happens,” he said bluntly late Saturday afternoon. “I knew I was going to go.”

It certainly didn’t look like Wagner was hurt. In a 82-72 road victory over a team his coach said might be the best in the country, the junior center poured in a career-high 27 points on 8-of-13 shooting from the field.

And as Wagner flexed toward his own bench near the end of the game, later turning to the crowd to gesticulate and pull at his jersey, one thing was clear: those in attendance had just witnessed a masterful performance.

Quite simply, it was the type of outing most envisioned occurring on a consistent basis after Wagner’s decision late last spring to return to Ann Arbor.

Yet the early part of his junior campaign hasn’t exactly played out that way — at least not until Saturday’s soiree at the Breslin Center.

“I think what we saw, if (Wagner) had bad games, he was trying to do too much,” Beilein said. “He wasn’t doing what brought him there. Shot fakes, drive the ball hard, he was loving only the 3, his defense was awful.

“And now I think he understands that that’s not going to work, and he really did a great job today. … He was really basic, and just really played the way we saw him play last February (and) March.”

Beilein might have a different definition of really basic than most. Against the Spartans, Wagner showed off every offensive tool he had in his arsenal. Despite foul trouble that limited him to sporadic playing time, he never cooled off, lighting up Michigan State’s big men and hedged screens from tip-off.

It was Wagner who countered every time Michigan State made a big play.

After Jaren Jackson Jr. rejected one of his first-half forays into the paint, Wagner hit a 3 and promptly shushed the crowd. Then he drove by Jackson on another possession, dunking emphatically with his left hand. He even threw in a block on Jackson a couple possessions later.

The second half was much of the same. When Wagner checked back in with 11:22 left, he immediately attacked Xavier Tillman, spinning past the freshman and finishing through contact with ease.

Following a 6-0 run from the Spartans, Wagner hit another 3, holding his outstretched hand in the air for several extra seconds. And then it only got more absurd.

Emulating his idol, Wagner hit a Nowitzki-like fadeaway — exactly the type of shot that his coach might have thought ill-advised. And then, in another highlight-reel play, Wagner embarrassed his nemesis, going behind the back to leave Nick Ward splayed out on the floor.

“I know I can shoot a little bit. So that’s not a surprise if it goes in — that’s why I’m shooting it, to make it,” Wagner said. “Those are big baskets because it’s awesome when they slap the floor, the crowd goes wild, and then you hit one and everyone’s silent again. It’s kinda cool. You obviously sense that as a player too. It’s fun.”

When questioned after the game about the rivalry between the two teams, Wagner may have tried to mask his true emotions.

He spoke about how it was “a little different” with him being from Germany. He called the rivalry “crazy.”

Yet it was plenty clear that Wagner understands his place in this rivalry, place of birth be damned. He relished every moment of Saturday’s game, every chance he had to stick it to the opposing bench and home crowd.

Wagner embraced being the heel, expressing himself in the same manner as former Wolverines such as Nik Stauskas, Zack Novak and Trey Burke.

Those individuals carved out legacies with their performance in this storied rivalry.

On Saturday, Moritz Wagner did the same.