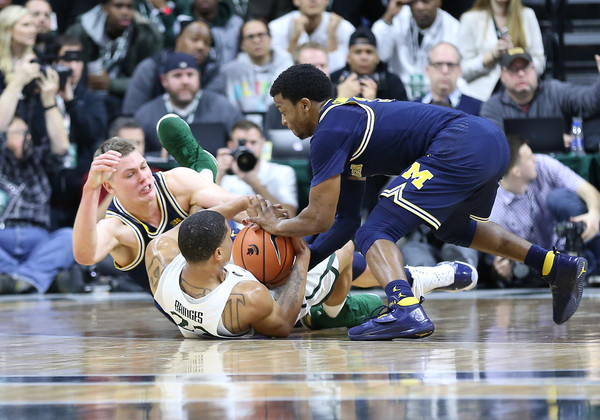 Michigan scored its biggest win of the season thus far on Saturday, beating No. 4 Michigan State at the Breslin Center 82-72. Here are five takeaways.

Michigan scored its biggest win of the season thus far on Saturday, beating No. 4 Michigan State at the Breslin Center 82-72. Here are five takeaways.

Watching Simpson now as opposed to the beginning of the season (let alone last year) is like watching a completely different person play basketball.

Simpson is no longer tentative. He used to hesitate when left open from 3, or stop his drives halfway as soon as a big man entered the paint. That rarely happens now.

He might not be a threat to shoot off the dribble, but dare him to shoot and Simpson will happily oblige. When the ball found him near the end of the shot clock early in the game today, he looked around, realized shooting was the best option, and nailed the deep triple. That was the only shot from outside he hit all day, but he’s at 46.7 percent from 3 on the year — a benefit of largely taking open looks.

As for his game off the drive, Simpson went right at a defense that blocks over 20 percent of its opponents’ 2-point shots, per KenPom. He finished at the rim a handful of times, found Duncan Robinson and Wagner for 3-pointers when the defense contracted, and didn’t turn it over once.

“He’s been able to make plays, he’s been able to — especially in the second half — taking the ball right at their shot blockers and finish,” Beilein said. “So, feels terrible about missing the foul shots (at the end), but man, he did so many other good things.”

It’s hard to imagine Simpson playing much better than he is right now. He’s posted an offensive rating of 130 or better in three of his last four games, per KenPom. His effective field goal percentage is up to 63.3, from 43.0 last season.

The 6-foot point guard handed out two assists in Michigan’s two December conference games. He’s racked up 24 dimes in four games since league play resumed. Simpson isn’t the first Michigan point guard to flip the switch in the middle of a season, but his sudden improvement might be the most surprising.

On the other end of the floor, Simpson negated Michigan State’s point guard duo. Cassius Winston averages 7.2 assists per game, but was held to just two assists and four turnovers in one of his worst offensive games of the season.

Not only was Wagner at full strength, he played his best game of the year, finishing with a team-high 27 points on 8-of-13 shooting from the field. Every time the Wolverines needed a basket, they turned to him. And every time, he delivered.

Midway through the first half, Jaren Jackson Jr. turned the Breslin Center into a madhouse with two straight blocks and a dunk to put the Spartans up. Wagner calmly nailed a 3-pointer coming off a pick-and-pop, then shushed the crowd afterwards. Midway through the second half, after Michigan State pulled within a point, Wagner drove the baseline and finished over Xavier Tillman, drawing the foul to boot.

When Michigan was pulling away, Wagner provided the Wolverines’ two best highlights: a one-legged fadeaway straight out of Dirk Nowitzki’s playbook and a crossover that broke the ankles of Nick Ward, leading to an easy layup.

“We didn’t know if Moe was gonna be able to play today for a little bit,” Beilein said. “He had tweaked the ankle that he had bothered (earlier in the season).

“…But he didn’t look like he was bad today.”

Under Beilein, Michigan has never ranked better than 47th in the country it defensive rebounding percentage. They’ve only been in the top-70 twice. Right now, they’re 14th — and climbing.

“I just think there’s this jump — if anybody watched the jump in Moe Wagner getting rebounds away, out of his area,” Beilein said. “Probably one of you analytical guys can probably figure that out. Like in baseball, how far you have to go to get a rebound. He never would do that. He’d sit and watch it. So that’s been a big difference for us and I think Charles makes a big difference there as well.”

Matthews, whose defensive rebounding rate sits at 14.9 percent, is far from the only piece of the puzzle. Muhammad-Ali Abdur-Rahkman, Duncan Robinson, and Zavier Simpson have all seen their numbers go up in that category since last season. Increased minutes for Jon Teske have made a difference as well.

“We did show the grit,” Beilein said. “One assistant, Saddi Washington, from right here in Lansing, said, ‘Coach, this team may be different. This team has some of that grit that you may need to win games like that.’ I think that was evident today.”

Winning games gets a whole lot easier when you can hit free throws. All year, Michigan has experienced that the hard way. Their 7-of-11 mark from the line against Purdue on Tuesday was part of what allowed the Boilermakers to win at the end. That was also the 10th game this season in which the Wolverines shot below 70 percent from the line.

On Saturday, Michigan shot 80 percent from the charity stripe — 28-of-35, thanks to an officiating crew that seemed to want every player covered in bubble wrap. Their only misses came at the end of the game when the Spartans were intentionally fouling.

“Well, I made my free throws,” Wagner said. “I was very happy about that one, because I haven’t been doing that this year. And in practice yesterday, we agreed that, as a team, we’re not going to miss free throws anymore, so that was big today.”

It’s unlikely the Wolverines — who rank 317th in free throws per field goal attempt, according to KenPom — will see 35 chances from the line again this season. They don’t need to draw fouls to win games, at least against most opponents. But when they get to the line, they have to make them.

Michigan nearly blew a game against UCLA in December because they couldn’t do just that. It’s hard to blame the Purdue loss entirely on four missed free throws, but making them sure would have helped.

The Wolverines didn’t have a margin for error at the line on the road against a top-five team, and they played like it. Even when Michigan was up six with just under two minutes to go, Simpson missing two free throws nearly let the Spartans slide back into the game. Had he missed two more the next time down, Michigan State might have won it.

The Spartans played with two big men — usually either Nick Ward, Xavier Tillman, or Gavin Schilling alongside Jackson at the ‘4’ — for almost the entire game.

And for almost the entire game, Michigan got whatever it wanted off ball-screens. Wagner’s ability to force Ward and co out of their comfort zones down low and into space changed the game. Michigan State had little answer for pick-and-pop looks with Simpson and Wagner. The Wolverines found Wagner for 3 twice early in the game off that combination, then went back to it later for a Simpson layup.

“When (Tom Izzo) went smaller, when he took Ward out of the game, they switched some ballscreens and we’re a little bit more used to it right now,” Beilein said. “We’ll see it much more going forward. There are some big guys we can maneuver around a little bit. It was tough to maneuver, but I think our kids understand it more than when we saw from Ohio State way back in December.”

Right now, switching is the best way to defend any ball-screen action from Michigan. Wagner’s greatest asset is his ability to beat slower defenders off the dribble, especially when they are recovering off of a hedge. Switching negates that ability.

Purdue found success with it on Tuesday, but Michigan State’s big men could never adjust to slow down Wagner long enough.