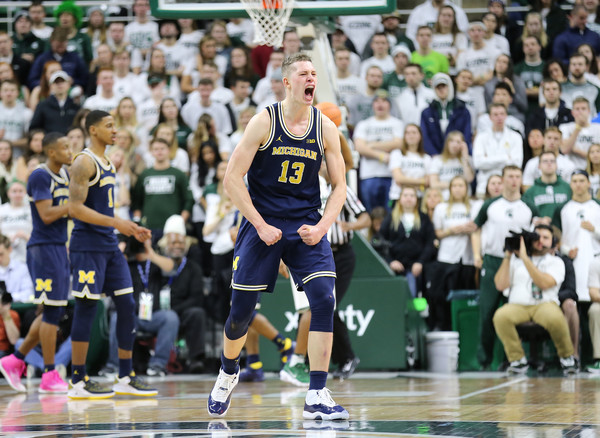 Michigan went into East Lansing and beat No. 4 ranked Michigan State on Saturday with its best performance of the season.

Michigan went into East Lansing and beat No. 4 ranked Michigan State on Saturday with its best performance of the season.

There was really only one script that the Wolverines could follow to leave with an upset win, but they followed it verbatim.

In my preview at The Athletic, I outlined five statistical battles that could swing this game: ball screen offense, transition defense, post-up defense, defensive rebounding and turnovers.

The Wolverines won all five battles and won the game.

Michigan State head coach Tom Izzo doesn’t make reactionary coaching decisions. He’s not the type of coach to draw up a new defensive look on a clipboard in a timeout to stop a single player. On Tuesday, Matt Painter did just that when he decided to switch every ball screen with his 7-foot-3, 290-pound center.

Instead, Izzo has a defense that he believes can win every game.  The Spartans have the longest and most impressive front court in college basketball and, up until this afternoon, had the best defense in the country.

It is tough to critique the Hall of Fame head coach’s decisions on that end of the floor, but it is also a bit easier to plan for them.

“If Michigan State switches all ball screens then the sky is falling,” John Beilein joked on Friday.

Michigan knew what it had to do to win in East Lansing and it wasn’t a secret. Actually doing it would require a new level of consistency on both ends of the floor that it hadn’t demonstrated all season.

The Spartans’ ball screen defense plays right into Moritz Wagner’s strengths, but to win he would need to play the game of his life.  The 6-foot-11 junior has been battling injury and has been up-and-down during a year he was expected to be an All-Big Ten performer, but he answered the challenge.

Wagner finished with a career high 27 points on 8-of-13 shooting and carried the Wolverines to the rivalry win.

Michigan State’s answer — moving Jaren Jackson Jr. to center — was left standing in the corner guarding Michigan’s perimeter threats until it was too late. 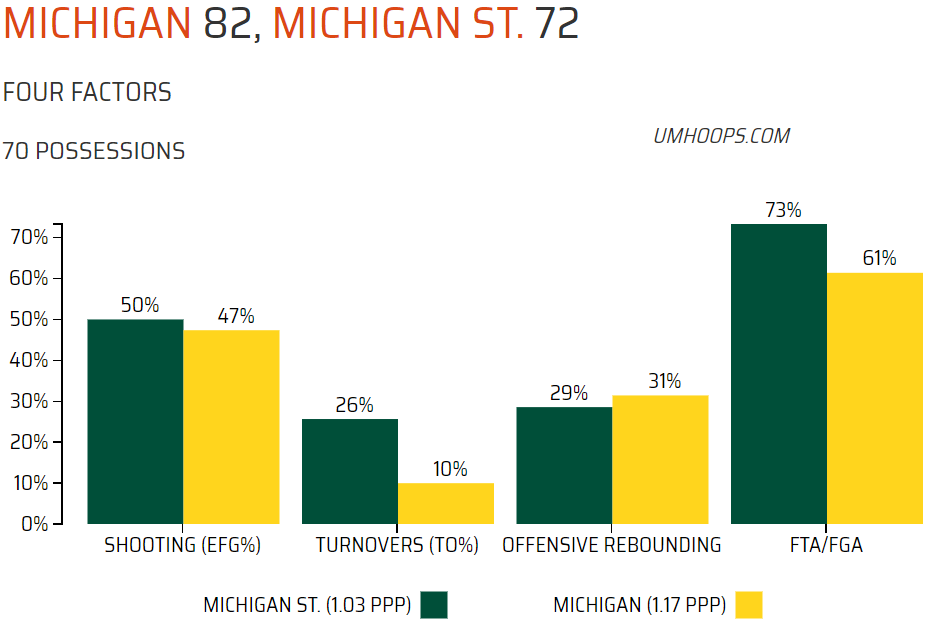 Jaren Jackson blocked six shots and Michigan made just 42.8 percent of its twos, but it kept attacking in the pick-and-roll game and made plays when it mattered. The Wolverines did hit 40 percent of their threes to inch their way to a 47% effective field goal percentage. Early on when adjusting to Michigan State’s length, some timely offensive rebounds allowed the Wolverines to pick up key baskets.

There was nothing complicated with what Michigan did on offense as it all revolved around the high ball screen and creating leverage for Wagner against a recovering big man or allowing Michigan’s guards to isolate and drive to the basket with the rest of the Spartan defense spread around the perimeter.

Make no mistake about it: this wasn’t a game that game down to untimely hot shooting. The Wolverines only made 3-pointer in the second half and still outscored the Spartans 48-35 in the final 20 minutes. Michigan State finished with 34 points in the paint, but Michigan finished with 32. Both teams were even with 12 second chance points.

There were 51 fouls in the game and the Spartans were in the bonus for roughly 15 minutes in both halves. Even with Michigan State’s late intentional fouling, the Spartans posted a 73% free throw rate on the game to Michigan’s 61%.

Other than the fouling —  and a game with lots of whistles against Michigan State is better for Michigan than a game with none — Michigan’s defense was incredibly solid. The Wolverines rebounded 71% of Michigan State’s missed shots and continued to prove that this year’s defensive rebounding effort is legitimate.

Michigan State made 55% of its twos, but Michigan’s ‘tough twos not open threes’ approach was in full effect. The Wolverines did a tremendous job negating of Josh Langford (who scored his first career basket against Michigan in his 6th half) and Matt McQuaid’s ability to score off of screens on the wings — that duo was 2-of-8 from the floor and didn’t make a 3-pointer — and they took away the 3-point shot. Michigan State was only 3-of-13 from long range and most of those looks came with the game already out of hand.

“As the head goes, the body goes with it,” Tom Izzo remarked about his point guard play after the game.

Zavier Simpson took out the head. Simpson was the best point guard on the floor and his defensive presence made life miserable for Cassius Winston. In the end, Michigan State’s point guards finished with two assists to five turnovers.

With Winston struggling, Michigan State ran more action through Miles Bridges. He had his moments (19 points on 13 shots and 4 assists), but he also turned the ball over 4 times. Nick Ward only played 14 minutes and was 2-of-5 from the floor with 3 turnovers and the Spartans weren’t willing to risk his defensive weaknesses if he wasn’t going to be perfect from the floor. Two effective double teams that led to turnovers in the second half essentially ended Ward’s night (he played just 14 minutes).

The Spartans turned the ball over once every four times down the floor and Michigan made them pay, outscoring the Spartans 26-7 in points off of giveaways.

Michigan has the best transition defense in the country and it held up against the Spartans’ vaunted transition attack. Michigan State only scored 2 fast break points and Michigan dictacted the pace all afternoon.

This gives Michigan that feather-in-the-cap quality win it had been searching for and changes the complexion of the season — moving the Wolverines up to 17th on KenPom. This is the sort of “we’re legit” statement win that can galvanize a team, but there also isn’t a lot of time to celebrate because Maryland is heading to Ann Arbor for a Monday night game. 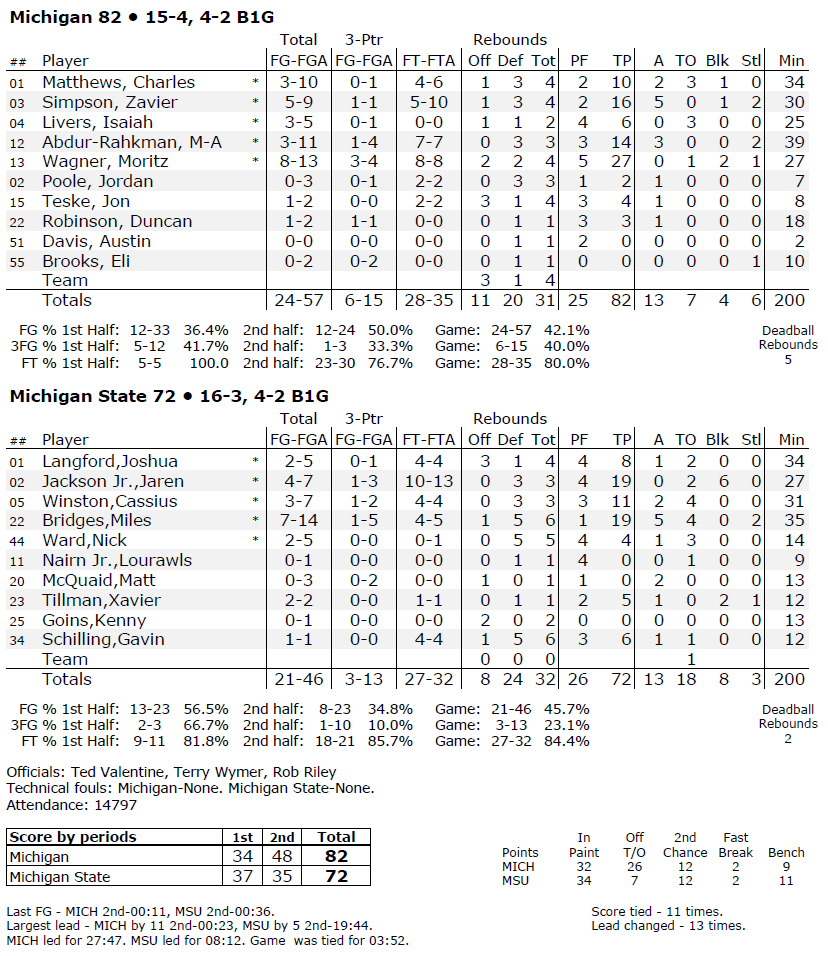