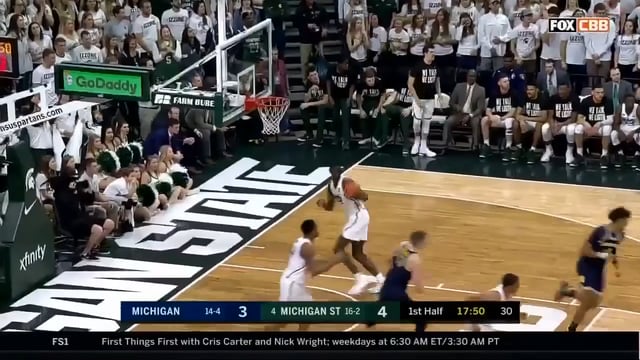 Here are Five Key Plays from Michigan’s win in East Lansing on Saturday.

In a whale of a game that saw two teams land blow after blow against each other, it was Michigan — led by Moritz Wagner and Zavier Simpson — that emerged victorious in front of an emptied and disappointed Breslin Center crowd.

That classic, much-anticipated 10-0 run that Michigan State has been known for in this rivalry — it never happened. The Spartans never managed to score more than 7 consecutive points and the Wolverines withstood whatever they had to throw at them, hitting big shot after big shot.

And at the end of the game, it was Wagner and Jordan Poole who had the last word, making sure to let anyone and everyone know what this win meant to them.

What Michigan did at the beginning of the game was just as important as what it did at the end. The Wolverines stymied Michigan State early on, forcing the Spartans to turn the ball over three times in their first five possessions.

And Isaiah Livers, in his first career start, was a big part of Michigan’s efforts. His defense at the ‘4’ was important for the Wolverines all day — something which John Beilein made sure to note after the game.

“I think he worked out alright,” Beilein said. “… I think that the game is still coming to him and every day it’s going to be better. … Isaiah’s learning about the little things that determine games, and he learned a lot of those things today.

“Still at the same time, he’s really a good matchup for us defensively, and offensively he wasn’t tonight, but he can be as he grows as a player.”

Moritz Wagner’s performance against the Spartans was perhaps one for the ages. Of course, it wasn’t always rosy.

On one of his early drives, Wagner was emphatically swatted by Jaren Jackson Jr., sending the crowd into a frenzy.

But Wagner wasn’t fazed. He simply responded by drilling a 3, putting a finger to his mouth to shush the crowd. Then he dunked on Jackson, and even blocked the freshman phenom himself several possessions later.

“(Wagner) was really basic,” Beilein said, “and just really played the way we saw him play last February (and) March.”

After two early free throws from Jackson gave Michigan State a five-point lead, the Spartans appeared close to breaking the game open. Yet that was the largest their lead would get all day — and it was quickly erased.

Michigan’s scoring was important, but it was the defense that sparked this run. The Wolverines notched five consecutive stops and forced four turnovers as Michigan State tried to force the ball into Nick Ward, but he couldn’t handle the double team.

Much of the Wolverines’ scoring came at the line as Charles Matthews, Muhammad-Ali Abdur-Rahkman and Simpson all made plays with the ball to get to the stripe and converted their freebies. Then Simpson stole the ball from Miles Bridges and whipped a nifty no-look pass to Livers in transition, whose dunk capped off an 8-0 Michigan run.

It was all Wagner down the stretch. After playing in spurts thanks to early foul trouble, Wagner settled in past the halfway mark of the second half and took over the game.
First he attacked Xavier Tillman for an and-one with 11:05 remaining after Tillman had scored on the other end. Then, with 8:10 remaining, Wagner responded to a 6-0 Michigan State run that gave the Spartans a brief one-point lead with a huge 3.

“Those are big baskets because it’s awesome when they slap the floor, the crowd goes wild, and then you hit one and everyone’s silent again,” Wagner said. “It’s kinda cool. You obviously sense that as a player too. It’s fun.”

5. Pretty offense down the stretch

Whatever adjustments Tom Izzo made — such as switching some screens while Nick Ward sat on the bench — weren’t enough. Michigan’s offense executed efficiently down the stretch, and the Spartans weren’t able to keep pace.

After Jackson, who had a team-high 19 points, hit a 3 and free throw to cut the lead to four, Wagner responded by hitting a Dirk-like fadeaway along the baseline with 3:52 left. 44 seconds later, he took Ward off the dribble, even causing him to fall down, on his way to an easy right-handed finish at the rim to give Michigan a commanding advantage.

Bridges responded on the other end, but Charles Matthews finished a beautifully-executed half-court set with a big dunk that sent Michigan State fans to the exits. Matthews essentially trails the initial ball screen action and uses Wagner’s initial screen to create a crease to the basket.