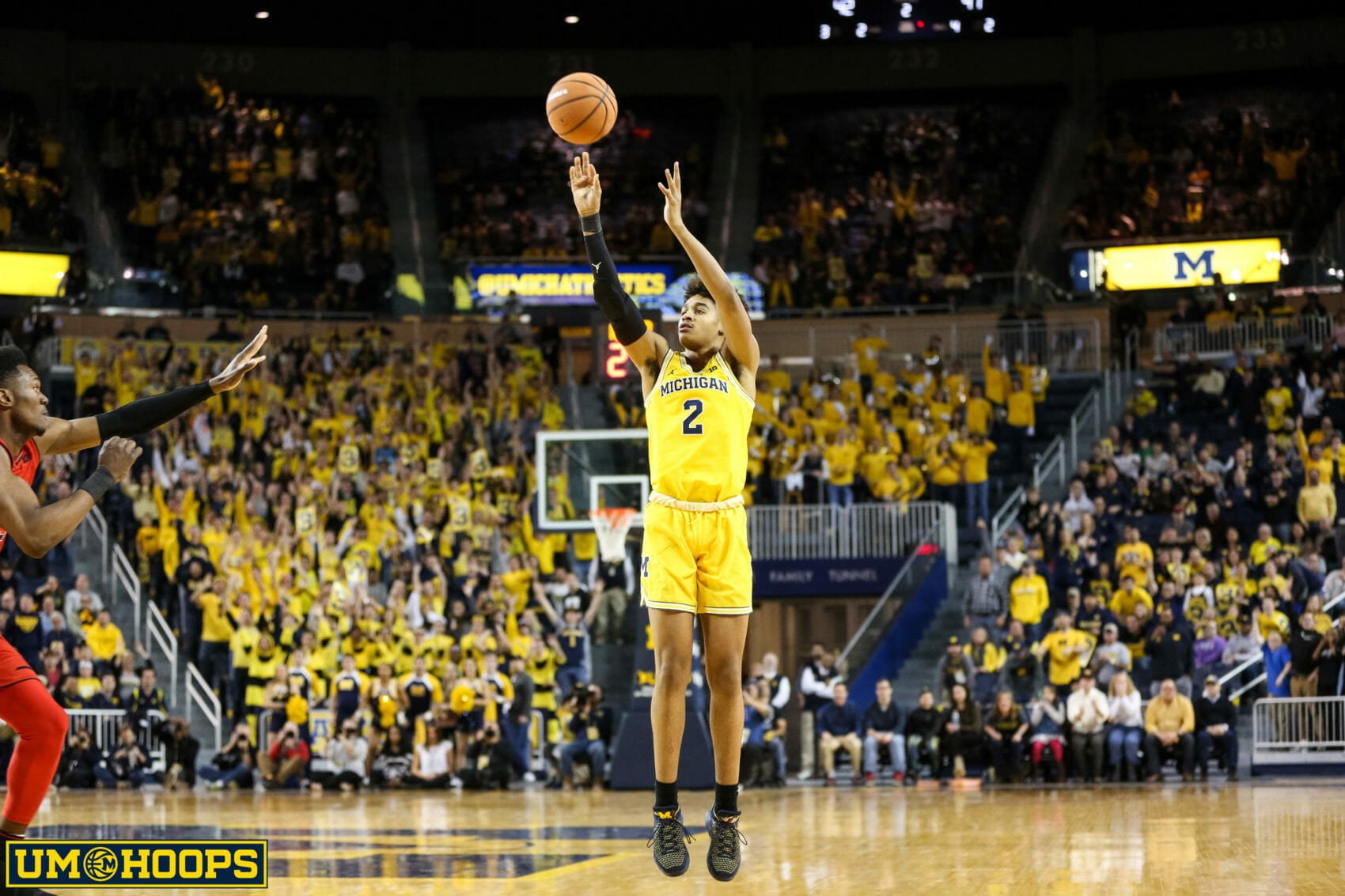 Here are Five Key Plays from Michigan’s win over Maryland.

Kevin Huerter ran out to the 3-point line, and what happened next seemed almost destined.

After all, it wasn’t difficult to recognize that Monday night’s game against Maryland was a trap game for Michigan. Faced with a short turnaround from their win over then-No. 4 Michigan State on Saturday, the Wolverines would surely be running on fumes against the Terrapins.

For the first half, that was exactly the case.

But then Michigan caught fire, Isaiah Livers threw a perfect pass and Muhammad-Ali Abdur-Rahkman drained perhaps the most important free throws of his career.

Here are five key plays from the Wolverines’ wild 68-67 win over Maryland:

1. Quick spurt to end first half

Things only worsened for Michigan after Maryland broke off a 14-3 run to take an eight-point lead. At one point, the Terrapins held a 28-14 lead over the Wolverines, who struggled to convert opportunities close to the basket. For a while, it was unsure whether they would hit the 20-point mark before the halftime buzzer.

But then Abdur-Rahkman converted, Jaaron Simmons drove hard to the basket and scored, and Michigan entered the half down just 10 after a quick 4-0 run. At the time, it felt as if the Wolverines were that close to being down by much more.

“It was one of those days when we felt like ‘Nothing is really working today,’ ” Wagner said. “We don’t give up. We’ve been down 18 points before, we’ve been down 16 against Purdue. We’ve been in these situations, we trust each other.”

Simmons hadn’t scored a basket since November 29th and his ability to come in off the bench with Simpson sidelined by two fouls and Eli Brooks struggling would prove to be a critical moment.

2. Run continues into the second half

Michigan carried that late momentum from the first half into the second. The Wolverines opened the second half with a 10-0 scoring run that tied the game.

Charles Matthews drove hard to the hoop, finishing at the rim, before finding Isaiah Livers in transition. Then Moritz Wagner, who scored a team-high 18 points, hit a 3 off a pass from Zavier Simpson, before Simpson himself converted an and-one to tie the game and cap off a 14-0 run.

The key to Michigan’s hot start was that its defense was forcing turnovers and it was able to create some tempo to a game that Maryland had sapped the life out of in the first half.

“When you turn the ball over like we did and shot a couple of quick shots at the start of the second half, that was really the difference,” Mark Turgeon said after the loss.

The Terps opened the second half with six empty possessions including three giveaways and that provided just enough life for the Wolverines.

3. Michigan catches from outside

After hitting just two 3s in the first half, the Wolverines more than doubled that in a span of just 2:06 following a 6-0 Maryland run that allowed it to regain the lead.

Of course, who else would start the barrage but Michigan’s precocious freshman guard, Jordan Poole?

Poole, who was held in check against the Spartans, fared much better against the Terrapins and their shoddy 3-point defense. He hit his first 3 at the 14:46 mark, before Wagner and Livers followed him up. Then Poole hit two consecutive 3s to get the Crisler Center crowd rocking, the first of which gave Michigan its first lead since its opening basket of the game.

He scored eight points in under two minutes as Maryland staged a late comeback — a comeback that Huerter finished emphatically with a deep 3 that gave the Terrapins a one-point lead with just over three seconds remaining.

“We never stopped playing,” said Maryland coach Mark Turgeon, “and we kind of snuck up on them in the end.”

Michigan botched a switch on the final possession which left Huerter wide open.

“We were switching everything on that one,” Beilein said. “We wanted Isaiah on the floor to be there to rebound, switch ball-screens, but Duncan (Robinson) would have been better in that situation, cause he would have known what was happening.”

5. Inbounds play of the year

In a play that must have brought him back to his high school days as a baseball player, Isaiah Livers helped save Michigan’s newly-minted top-25 ranking.

John Beilein called an inbounds play that the Wolverines have run before — most notably against Villanova during the 2014-15 season — with little success.

But here, the play call worked to perfection.

Wagner set a screen for Matthews cutting across half court, then re-screened for Abdur-Rahkman, who cut into the space Matthews vacated. Livers heaved the ball, completing the pass to a mid-stride Abdur-Rahkman, who promptly drove into the paint before Bruno Fernando tripped him and sent the senior to the line.

There, Abdur-Rahkman calmly sank both free throws to give his team the win.

“Our first mistake was celebrating too much,” said Maryland guard Anthony Cowan Jr. “We should’ve just went back to the bench and get our game plan on defense.”

Added Huerter: “All of us are just thinking of things we could’ve done differently. We were talking about we wanted (him) to catch it in front of us and make him take a long shot, let them take their chances. Once I saw him catch it and get a head of steam, I knew it was bad news.”

And in the end, Michigan found a way to escape at home.

“That (turnaround) is tough, but that’s what makes good teams good, and we know that,” Wagner said. “Adversity, we’ve proven that we can win and adjust. But prosperity? That’s what the really good teams adjust to.”