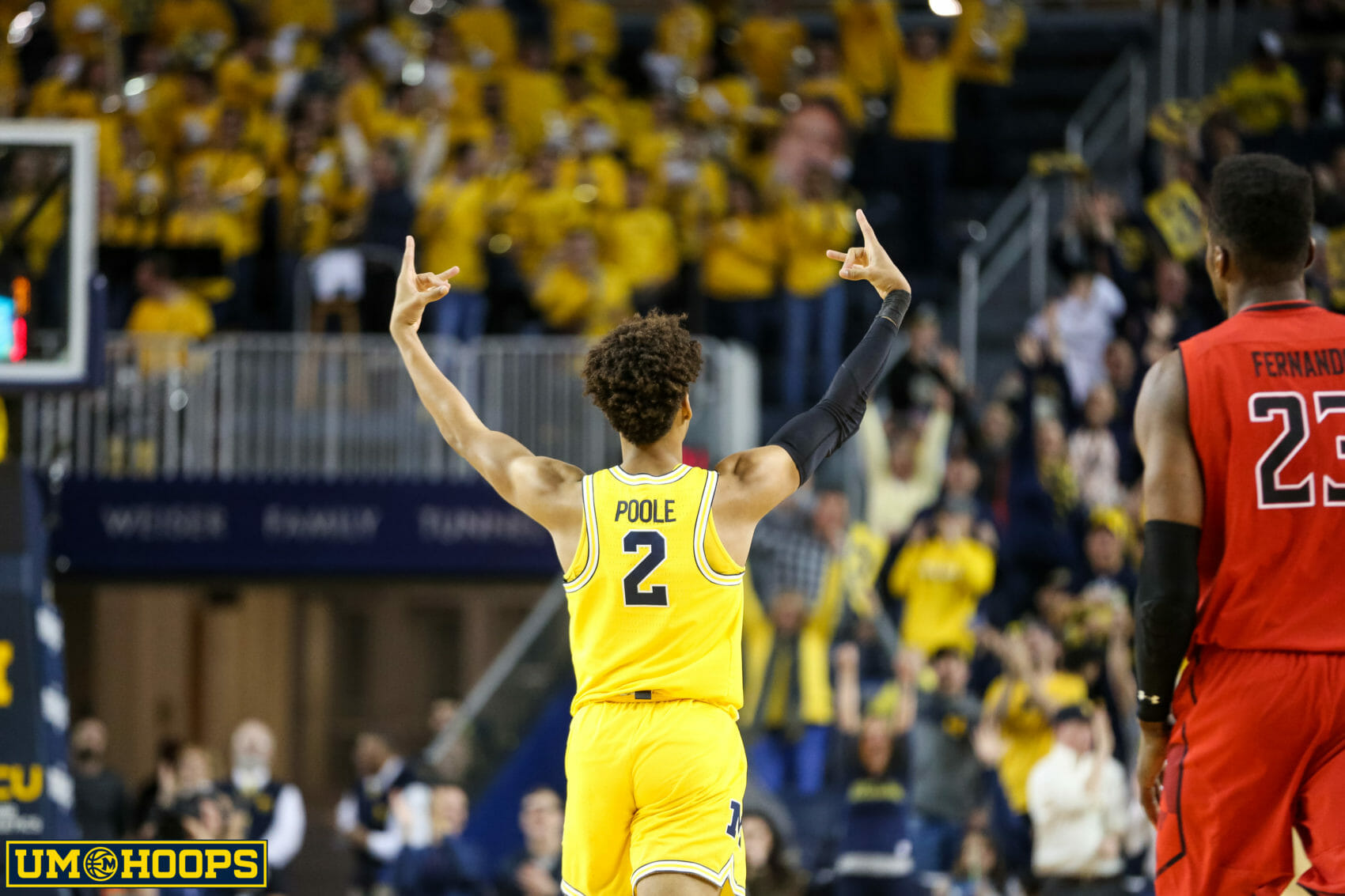 Michigan beat Maryland on Monday night despite an ugly first half and some late game woes. Here are five takeaways from the win.

Michigan followed a heartbreaking loss to Purdue and an emotional win at Michigan State by beating Maryland on Monday night, thanks to two last second free throws from Muhammad-Ali Abdur-Rahkman. Here are five takeaways.

Rahkman hit perhaps the biggest shots of Michigan’s season thus far to win this one: two free throws with 1.2 seconds to go, putting the Wolverines up by one in what ended up being a decisive lead.

To boot, those accounted for Rahkman’s 999th and 1,000th career points.

“Definitely didn’t think it was gonna happen like that, but glad it did,” he joked after the game.

The play that got him to the line was a John Beilein special, one the coach has had in his back pocket for 20 years and practices regularly, according to his own estimate.

It required a laser of an inbounds pass to Rahkman just in front of the half-court line, which Isaiah Livers — a baseball player in high school — completed with gusto.

“Kinda had like a little flashback during it, back to my days when I was playing football,” Rahkman said. “Everything just zeroes in, you zero in on the ball, you turn your head up, look up the court.”

Then, get downhill. And, with 3.6 seconds on the clock as the pass was thrown, do it fast.

“I saw nothing but open space and that just means go downhill,” Rahkman said. “I know I didn’t want to pullup for 3, just tried to get to the basket. Either make a play for myself or somebody else, but luckily I got fouled.”

He did, drawing the foul, and nailing two free throws after a tedious replay review, as the 10,545 in attendance collectively exhaled.

Though Maryland had just over a second to come up with something of its own, the Terps couldn’t get anything better than a heave, which fell well short.

Livers, the catalyst for the winning play, had redemption on his mind when he threw the baseball pass. Just seconds earlier, he blew a switch allowing Maryland’s Kevin Huerter an open 3-pointer to put the Terps in front.

“We were switching everything on that one,” Beilein said. “We wanted Isaiah on the floor to be there to rebound, switch ball-screens, but Duncan (Robinson) would have been better in that situation, cause he would have known what was happening.”

Of course, it didn’t matter in the end. However, if that answer is any indication, Robinson could be on the floor in late-game situations on defense in the future.

Wagner notched his first double-double since the dregs of non-conference play, scoring 18 and bringing down 11 rebounds. He was the best player on the floor, a refrain that seems more and more familiar each game.

Right now, nobody has an answer for the spacing Wagner can provide. Maryland started the game by going small, bringing Bruno Fernando off the bench, but it did no good. Even with Michigan’s offense listless, Wagner scored five points in the game’s first five minutes before Turgeon subbed Fernando back in.

Later in the game, when the Wolverines went on a run to start the second half, Wagner nailed a 3-pointer after a Zavier Simpson drive drew help, then blocked Anthony Cowan at the rim on Maryland’s next possession. Later in the half, he put in two more triples when the Terps dared leave him open.

“It’s awesome to just run back and just know it’s going to go in,” Wagner said, describing the feeling. “And just it’s — oh my god, thanks. Thank the Lord.”

He finished 4-of-6 from beyond the arc, all while pulling down rebounds like fruit from a tree.

“It’s just tough for anybody — for us, for anybody — to guard a shooting ‘5,’ ” Beilein said. “It’s tough…It’s just a structure that allows us to spread the floor and if they take away the layup or protect the rim, then you may have some guys open.”

That conundrum always existed in regards to Wagner. But never has he managed to shoot at such a high clip — 42.2 percent from beyond the arc after Monday — or defensive rebound anywhere close to the 26.9 percent mark he’s at now. Keep doing that and it’s hard to find a ceiling at the college level.

Nights like Monday are when Jordan Poole’s presence is most important. After a frustrating first half, Poole’s energy was a welcome shift when he came on in the second.

Immediately, there was an impact. Poole hit a 3-pointer from above the break off the catch on his first offensive possession after coming in. A couple minutes later, he pulled up in transition, and nailed it. Next time down, Livers found him off a Simpson drive-and-kick look. There was never a doubt. Suddenly, Michigan led 45-41. When Poole had come in, they were down 37-30.

“He was amazing when he came in there,” Beilein said. “He was amazing. And somehow he can get open. He finds himself open and then, he’s got these shifty gears…He just is very quick to get in the right spots.”

Poole’s overall playing time has been largely dependent on whether or not he gets going right away. In the two games prior to Monday, he played just seven minutes. Against Illinois, when he had it going, Beilein left him out there for 19. On Monday, it was 13.

That’s probably the best way to use someone like Poole, at least until he can be trusted defensively. Some nights, he won’t have it. But when he does, Poole will spark a run 10 times out of 10, get the crowd into it, and leave opposing defenders shrugging their shoulders.

“Jordan gave us a lot of swag,” Wagner said. “That’s what he does. Sometimes he’s too swaggy. The way he was out there, just confident, knocking down shots. He lives for that type of stuff.”

The quick turnaround got to Michigan

It’s hard to overstate how poorly Michigan played in the first half. The Wolverines simply couldn’t make a shot, despite a large portion of them being open. They didn’t seem to have their legs under them and shot just 35% on twos and 22% on threes.

“They made us look bad,” Beilein said. “We did miss some shots, some easy ones. But we also didn’t get many easy ones.”

Added Wagner: “We didn’t make shots. But like I said, when you don’t guard, you don’t get stops, so you can’t run. And we want to run, we wanna have fun. If you don’t get a flow, it’s hard to establish an offensive rhythm.”

Every Big Ten team has to deal with a quick turnaround at some point in their schedule — one of many negatives to come out of shoehorning the conference tournament up a week to play at Madison Square Garden. It’s clear this one got to the Wolverines, who came off an emotional win in East Lansing on Saturday.

“It would have been much easier to get ready, mentally and physically for our players, if we had lost at Michigan State,” Beilein said. “The fact that we had won — there was a lot of distraction there. And I told them before the game, ‘People are saying you’re pretty good. I’ll tell them how good you are if you can beat Maryland.’ ”

At halftime, Michigan was lucky to be down by only 10. Of all people, it was Jaaron Simmons who helped spark the 4-0 run that left the door cracked open. In the second half, the Wolverines sprinted through it, going on a 10-0 run immediately.

“There wasn’t any inspirational teaching or positive reinforcement (at halftime),” Beilein said. It was like, ‘What the hell? We gotta play better.’ ”

Evidently, that advice was good enough.

Although the slow start carried over to the boards — Michigan gave up four offensive rebounds in the game’s first 15 minutes — it continued to hold the line on the defensive glass.

Maryland pulled down just one offensive rebound in the second half, and missed the ensuing 3-pointer.

The Wolverines have been through the rebounding ringer recently, facing three top-50 teams in offensive rebounding rate over their last four games. Two of those — Illinois and Michigan State — rank in the top-six. And Michigan has passed the test every time.

“Just get stops, rebound, that’s the thing we identify ourselves (with),” Wagner said. “Take 3s away and box out. They ended up I think with five offensive rebounds? Eight? Something like that, a low number. Which wins us the game.”

Now, it’s not only something Michigan does well. It’s a defining factor of their success. The Wolverines have rebounded a Big Ten-leading 76.3% of their opponents misses in league play and have been tested against some of the best. Per KenPom, Moritz Wagner is 22nd in the country in defensive rebounding rate.

If you told somebody that a year ago, it would have been laughable. And yet, here we are.