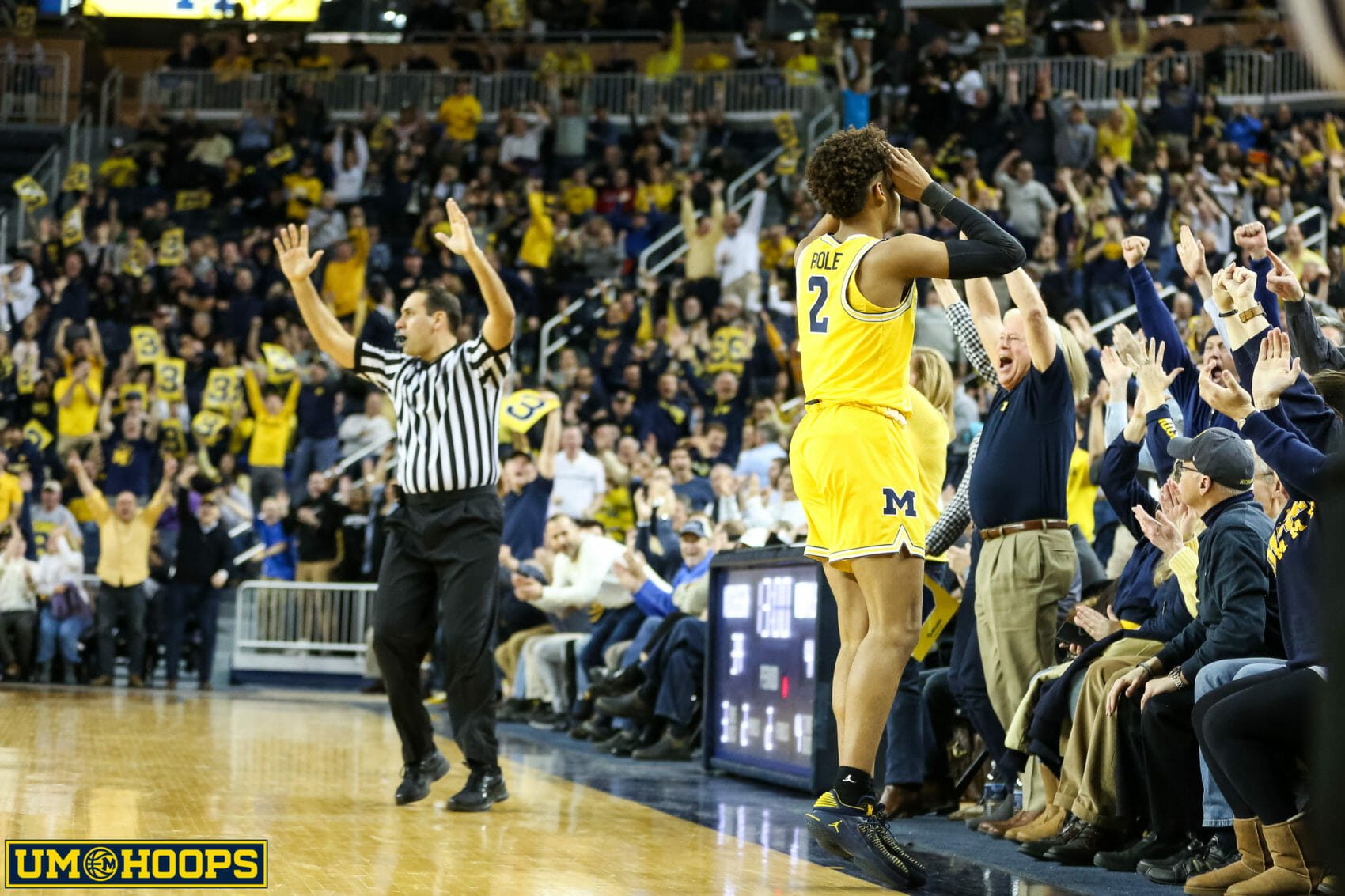 “Jordan’s an interesting guy for me to coach,” Beilein said. “…There’s some drama — I don’t know if there’s some drama, but there’s some extracurriculars that go on in the game that we’re trying to embrace and work through but we really have gotten along very well. He plays defense and he really makes — tries to make — the next right play.”

If you had to pick one play to encapsulate Jordan Poole’s season, it would be from just the other night, when the Wolverines were fighting back against Maryland. Zavier Simpson stripped the ball away on defense and Poole was up ahead on the break. The sophomore found the freshman a half-step in front of the 3-point line, with the other eight players on the floor rushing to catch up. Poole decided to fire, keeping the presence of mind to get behind the arc as he did.

Ball found net. Michigan led Maryland for the first time since the score was 2-0. Such is the Jordan Poole experience.

Poole is on the floor for barely over a fifth of the time, per KenPom, yet uses a higher percentage of possessions than anyone but Moritz Wagner and Charles Matthews when he’s on the floor. When he’s hot, as he was on Monday, Poole is a one-man 8-0 run whose energy carries over to teammates and crowd alike. On other nights, however, he’s a blip on the box score radar, playing for a short time without making much of an impact.

Beilein has said he wants Poole to play more minutes than the 12.1 per game he’s averaged since breaking out against Indiana. (Take out that game, in which he played 27, and the number drops to 10.7.) But doing so means the freshman needs to be consistent.

“Jordan’s an interesting guy for me to coach,” Beilein said. “…There’s some drama — I don’t know if there’s some drama, but there’s some extracurriculars that go on in the game that we’re trying to embrace and work through but we really have gotten along very well. He plays defense and he really makes — tries to make — the next right play.

“He’s gotta chance to be really good one day. He’s gotta understand what winning plays look like and I’m trying to understand better ways to get him there… We were probably on opposite ends of the spectrum when he first started practicing about what winning basketball looks like.”

Poole will openly admit he needs to improve in some areas, citing turnovers and shot selection.

It seems pretty unlikely his shot selection will ever be perfectly to Beilein’s liking. Right now, the 11 3-pointers he takes per 40 minutes are a defining part of his game and it’s tough to imagine he’ll stop as long as he’s hitting 44 percent. But that doesn’t mean it can’t get better.

“A couple days ago, I was watching when I played, like, high school, and I was taking some wild shots,” Poole said. “Now, obviously, I know how to play and what’s the right shots and playing under in a shot clock and stuff like that. It’s just paying off.”

There’s still a learning curve for Poole, as is the case with any freshman. His defense isn’t good enough for Beilein to trust him on the floor late in games. He’s still figuring out kinks in Beilein’s system.

“There’s still stuff in practice that we’ve probably been over, probably like 500 times, I’m looking like, ‘What is this?’ ” he said. “And then you go, you ask questions and you talk to Charles (Matthews) and Muhammad(-Ali Abdur-Rahkman) and coach, it makes it easier to understand.”

Yet, it’s hard to be concerned. Poole has already crushed expectations and more time on the floor seems like a given at this point.

Against Maryland, Beilein played Poole at the two alongside Abdur-Rahkman as the other guard rather than playing a traditional point guard. The look speaks to how much the head coach wants to incorporate his freshman when the offense sputters.

“Just being patient,” Poole said, when asked how he can accelerate the coming of those minutes. “Obviously I want to get out there on the court and I want to play, but if coach is ready to put me in, I gotta make sure I’m in the right position mentally and physically to go out there and play and step up.