Michigan hasn’t lost to Nebraska since the Cornhuskers joined the Big Ten and will put that perfect record on the line tonight in Lincoln (9 p.m., BTN).

Michigan hasn’t lost to Nebraska since the Cornhuskers joined the Big Ten and will put that perfect record on the line tonight in Lincoln (9 p.m., BTN).

Nebraska sits alone at 6th place in the league with a 4-3 conference record and has only lost one game at home this year — by 1 point to Kansas. The Huskers will be looking for revenge after Michigan ended last year’s regular season with a 36-point win at Pinnacle Bank Arena. A loss that Tim Miles told reporters his 91-year-old father called him to discuss this week.

Tim Miles has effectively created Transfer U at Nebraska as it seems like someone is always coming and going from his program. Three Nebraska starters began their careers at other programs and Miles has created a versatile set of athletic wings and forwards to place around junior point guard Glynn Watson Jr.

Nebraska’s offensive profile isn’t going to scare anyone. The Huskers are ranked just 114th nationally in adjusted offensive efficiency and are scoring only .96 points per possession in league games (11th). Those offensive problems stem from the fact that this team just can’t shoot the ball very well. Nebraska has made 43.4% (11th) of its Big Ten twos and 32.4% (11th) of its Big Ten threes for a 45.3 eFG% (12th).

Nebraska’s offense relies heavily on the ball screen, but it isn’t all that efficient on the pick-and-roll shots that it attempts. Only Michigan and Rutgers run more of their offense out of ball screens in the Big Ten, per Synergy, but Nebraska grades out in just the 11th percentile nationally in pick-and-roll shots by ball handlers.

The one thing that Nebraska does a great job of is getting to the free throw line. The Huskers are attempting 40 free throws per 100 field goal attempts in league play (2nd) and they have players who can put the ball on the floor and attack the rim at multiple positions.

Nebraska’s defense does a terrific job of running teams off the 3-point line. Nebraska opponents attempt only 29.5% of their shot attempts from 3-point range (9th nationally) and they are shooting just 31.9% (47th nationally). Tim Miles refers to the Cornhusker defense as a modified pack-line approach and this is the best shot blocking team that Miles has coached in Lincoln.

Miami transfer James Palmer is coming off of a 24-point performance against Illinois that included a 3-pointer at the buzzer to win the game. Palmer’s 3-point shot is inconsistent at 33%, but he shoots 48% inside the arc and gets to the free throw line often. Palmer is great in transition and effective spotting up and he’s also the No. 2 option in the ball screen game. His tendencies in the pick and roll game are clear, he almost always uses the screen and he’s far and away most effective when he gets all the way to the rim. 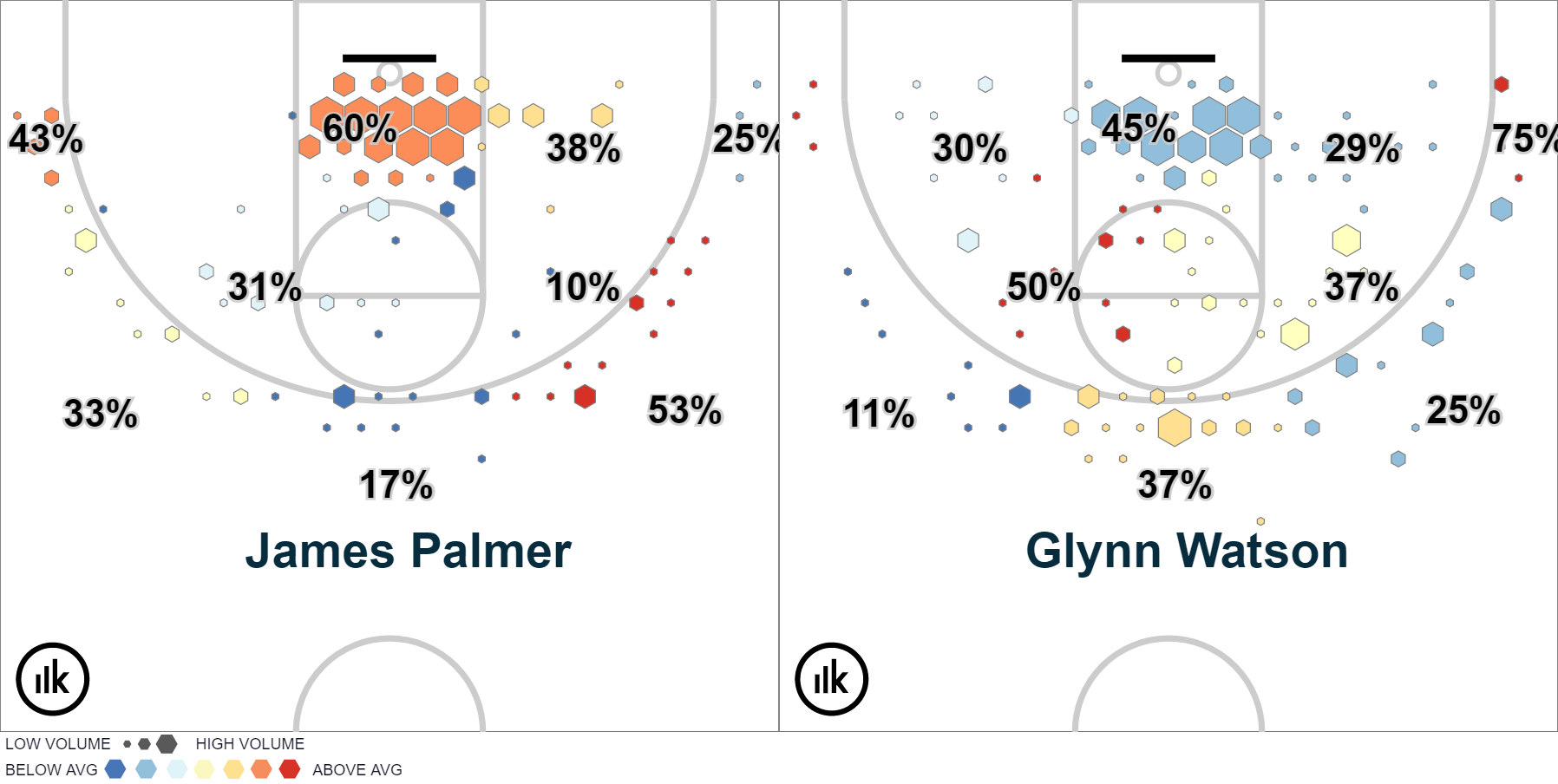 Junior point guard Glynn Watson is having the least efficient season of his career. His assist numbers are up, but he’s shooting just 42% on twos and 30% on threes after making 40% of his triples a season ago. Make no mistake, Watson has game and is capable with the ball in his hands, but the Nebraska offense ends up with him taking a lot of difficult shots late in the clock and off the dribble. Watson doesn’t get to the rim as often as Palmer, but he has just a 34.9 eFG% on off the dribble jumpers, per Synergy.

Georgetown transfer Isaac Copeland was a five-star prospect out of high school and the 6-foot-9 forward is shooting 54% on twos, but just 28% on threes. While he’s not an efficient jumpshooter from distance, he’s a very capable shooter in the mid-range at 53%. Copeland is a tough cover because he’ll play minutes as a small-ball five and is the sort of versatile multi-positional forward who can deal with Moritz Wagner in the pick-and-pop. 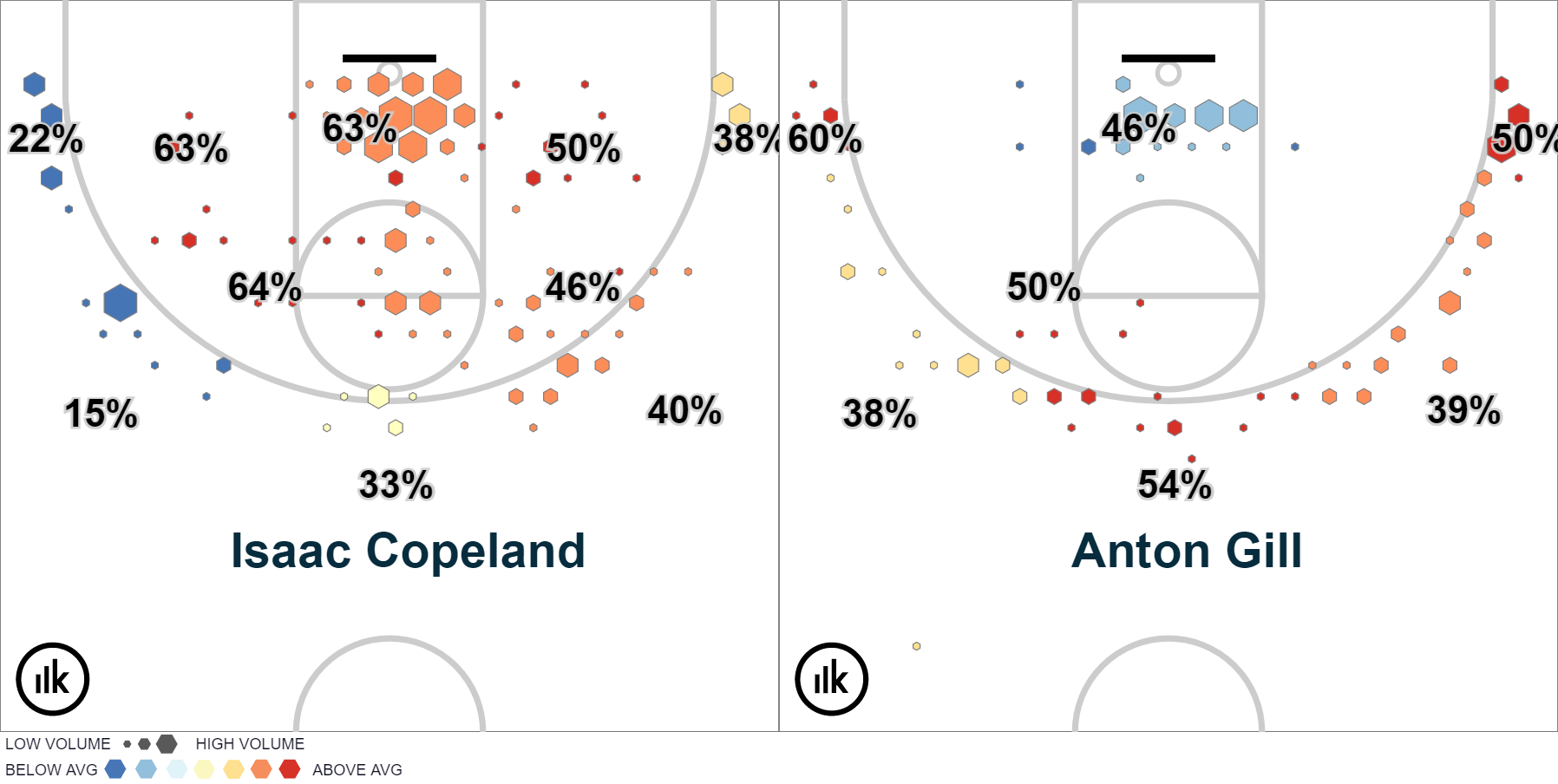 Yet another transfer, 6-foot-3 senior Anton Gill starts at the off guard. Gill spent two years at Louisville, sat out a year, and then missed all of Big Ten play due to injury last year. He’s healthy now and is Nebraska’s best perimeter shooting threat. Gil is shooting 46% from deep (but just 38% inside the arc) and has to be ran off the 3-point line.

Isaiah Roby is a do-it-all forward at 6-foot-8, 225 pounds who blocks shots, picks up steals, finishes inside and can even step out and hit a three. He’s not a high usage offensive player, but he’ll get involved in a bit of pick-and-roll action as a screener and he was very disruptive defensively last time out against Illinois.

6-foot-5 senior Evan Taylor was swapped out of the starting lineup on Monday after starting the first 19 games of the year. Taylor is a low usage offensive player, but he does shoot 46% on threes.

Jordy Tshimanga is back with the team after missing the last two games due to personal issues. Tshimanga is one of the bigger players on the Nebraska roster at 6-foot-11, 268 pounds, but he’s shooting just 38% on 2-pointers this year. He provides a physical presence inside, but I’d expect Nebraska to stick to more of its smaller and more versatile personnel vs. Michigan.

6-foot-1 freshman Thomas Allen comes off the bench and provides some additional shooting. 6-foot-8 junior Tanner Borchardt and Winthrop graduate transfer Duby Okeke can provide some additional size and rebounding in the post.

This one won’t be easy. Nebraska is one of the more difficult places to play in this league that nobody seems to talk about. The Huskers look like a team that could finish in the top half of the Big Ten and they won’t be an easy out at home. This is also one of only two games left on Nebraska’s schedule against teams projected in the NCAA Tournament. Expect Pinnacle Bank Arena to be jumping, but KenPom projects a 67-63 Michigan win, giving the Wolverines a 64% chance of victory.