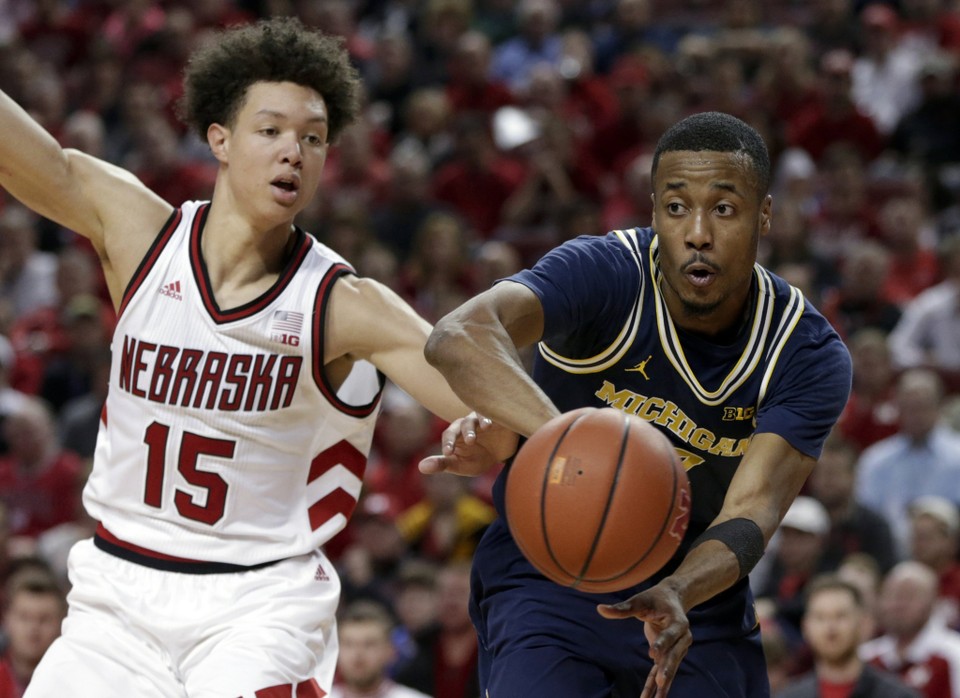 Michigan suffered a 20-point loss at Nebraska on Thursday night as its offense was thwarted by Nebraska’s ball screen switching.

Michigan ran head first into the wrong situation at the wrong time in the wrong place.

Nebraska had the personnel package to neutralize Moritz Wagner, a packed arena, and revenge on their mind after last year’s embarrassing home defeat.

After Michigan’s win in East Lansing, the common refrain praise for how the Wolverines kept the game in check. The Wolverines might have made mistakes, but they never made three or four in a row. Michigan State never scored more than 7 points unanswered. To win road games, you have to eliminate mistakes and make big shots to answer runs.

Michigan turned the ball over 9 times in 29 first half possessions and didn’t make a basket for the final 11 minutes of the opening period. It is impossible to keep a game in check with that sort of execution on the road.

The Wolverines trailed by 11 points at the half, 18 points midway through the second half, and emptied their bench with 5 minutes remaining in the 20-point road loss. 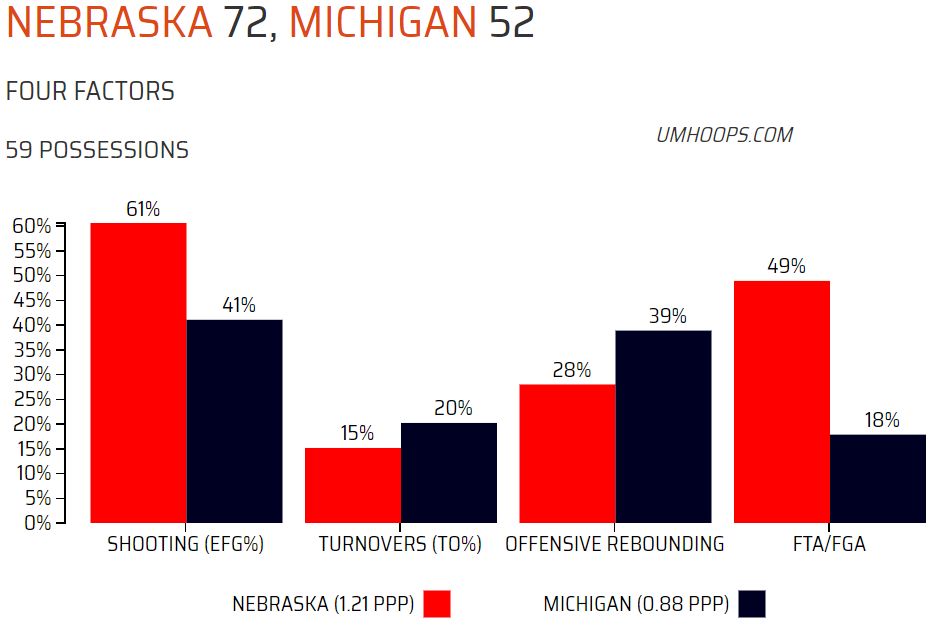 Michigan scored at least a point per possession in every Big Ten game last season and tonight is a reminder of just how far this offense has to go. The Wolverines only scored .88 points per possession, turned the ball over once every five trips down the floor, and had their worst shooting night of the season.

The Wolverines shot 45% on twos and 22% on threes for a 41% effective field goal percentage. About the only thing that went well on offense was crashing the glass as Michigan rebounded 39% of its misses for 16 second chance points.

First things first, Nebraska is a pretty good defensive team. The Cornhuskers are ranked 4th in the conference in points allowed per possession and they’ve already played Purdue and Michigan State on the road.

Michigan’s offense has real problems that it has to answer. The Wolverines lack shooting and ball screen playmaking from their guards and wings. Those two things are a staple of the John Beilein’s offense and while the guards made some of those plays against Purdue and Michigan State, this isn’t the first time that Michigan has looked incompetent for a half on offense. This was the third half of Big Ten basketball that Michigan failed to score more than 21 points.

Much will be made about the fact that Nebraska switched ball screens in this game and rightfully so. Michigan didn’t have an answer. There’s a bit more at play than switching every screen simply being Michigan’s undoing. Purdue switched every ball screen and Michigan’s offense had one of its better offensive nights of the year, tonight was Michigan’s worst offensive performance of the season.

Switching against Michigan works perfectly if you have the personnel to accomplish it. Tim Miles would have been comfortable with Isaiah Roby guarding any Michigan player on the floor and that makes the decision to switch everything easy.

The first inclination by announcers, fans or tweeters is to throw the ball in the post and “attack the mismatch”. This can work at times, but it speaks to the overall goal of a switching defense.  By that point, the defense has already won. They’ve taken the opposing offense out of what it wants to do and forced it into trying to figure out how to isolate in a one-on-one situation somewhere on the floor.

Case in point: Just 6 of Michigan’s 21 made baskets were assisted.

The mismatch in the post is also the first thing that any switching defense is designed to protect against. Nebraska’s length was a killer on Thursday night because they did a great job of helping down into the post and still being able to close out to three. Michigan couldn’t get open threes, couldn’t pass the ball inside (or got trapped when it did) and was left driving into the teeth of an aggressive defense.

At this point, it is no secret that Michigan’s guards aren’t all that great at scoring in isolation situations. Every coach knows that Moritz Wagner grades out in just the 34th percentile as a post-up scorer, but is elite as a roll man or spotting up against a big. There’s no easy option for an offense that doesn’t have a player like Derrick Walton ready to knock in a step back jumper over a slower player.

On defense, this was Michigan’s worst performance in league play at 1.21 points per possession allowed. The Wolverines are 0-5 this year when they allow more than 1.05 points per possession. There were plenty of defensive breakdowns, but Michigan’s undoing early on was its giveaways and mistakes offensively which led to the easy transition offense that it has worked so hard to take away from its opponents. That allowed the game to get out of trouble and Michigan seemed rattled from then on.

Michigan’s defense has drawn a lot of headlines, but it is ranked just 8th in the Big Ten in points per possession and 10th in eFG% allowed. There’s room for growth on that end of the floor as well.

That speaks to where this team is right now despite that signature win in East Lansing. This team isn’t on the same level as the conference contenders and is going to have to scrap to win every game this year. Road games are difficult to win and that’s why Michigan’s home win on Monday night was so important.