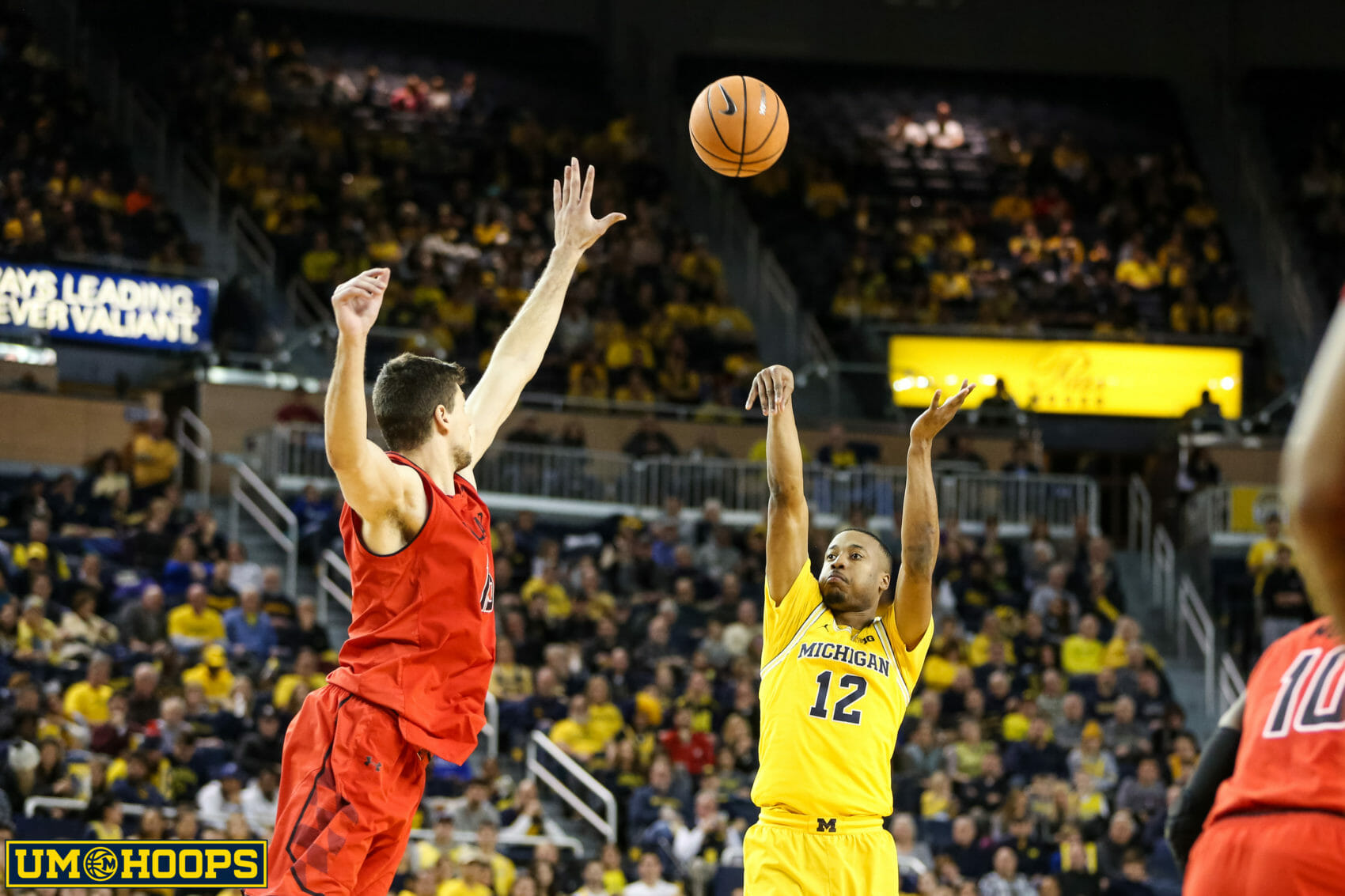 Michigan hosts Rutgers on Sunday afternoon (12:00 p.m., BTN) as it looks to bounce back from a disappointing 20-point loss in Lincoln on Thursday night.

Michigan hosts Rutgers on Sunday afternoon (12:00 p.m., BTN) as it looks to bounce back from a disappointing 20-point loss in Lincoln on Thursday night.

The Scarlet Knights enter Sunday’s game at 12-8 (2-5 Big Ten) and have been much improved this season — on defense. Rutgers has struggled to score the ball, but has managed to stay competitive thanks to its discipline on the defensive end of the floor.

Steve Pikiell padded his team’s record in the non-conference with the No. 348th ranked strength of schedule, but Rutgers has already knocked off Iowa and Wisconsin at home and managed to take Michigan State to overtime on the road.

Michigan will be playing its fourth game in eight days on Sunday afternoon as it looks to wrap up its most difficult scheduling stretch of the conference season.

Rutgers has the No. 25 defense in the country, per KenPom, but it is tough to tell exactly what they’ve got. The raw four factors statistics are impressive, but Rutgers also played 11 non-conference games against teams ranked 200th or worse by KenPom.

Rutgers is ranked 15th in eFG% defense, 37th in forced turnover rate and 81st in free throw rate allowed. Those are impressive metrics, but they are less impressive in their Big Ten standing. League opponents are scoring 1.04 points per possession against the Knights (7th) with a 50.5 eFG% (9th). Rutgers is turning over Big Ten foes on 20.8% of their possessions (3rd), but they are ranked 12th in defensive rebounding rate and free throw rate allowed in league games.

Junior point guard Corey Sanders is still running the show and his game hasn’t changed much over the years. Sanders is an explosive player with an impressive handle, but his game is heavier on highlights than substance. Sanders is shooting 43% on twos and 24% on threes for the year and has improved his turnover numbers this season.

6-foot-4 freshman Geo Baker  provides a scoring punch from the off guard. Baker is shooting 40% on twos and 38% on threes with solid assist numbers. He’s coming off of a 17 point, 5 assist, 5 rebounds and 4 steal performance against Iowa. Baker attempts about 4 out of every shots from 3-point range and is one of the keys for Rutgers having a good day offensively.

6-foot-9, 190-pound wing Issa Thiam provides an intriguing combination of size, length and skill on the wing. Thiam attempts over half of his shot attempts from three and makes 44% of his triples. He’s not a high usage offensive player, but he’s a shooting threat to track at 6-foot-10.

Deshawn Freeman plays combination forward minutes. At 6-foot-7, he’s not a threat to stretch the floor (16% on 3-pointers), but he’s an aggressive offensive player who can move weaker defenders. Freeman will provide a tough physical matchup for Isaiah Livers at the four position and he does a great job of drawing fouls.

Those four starters at the one through four all play heavy minutes and should be on the floor at most times as there is very little backcourt and wing depth on the roster with a recent injury to  senior guard Mike Williams, who is “going to be out a while” after injuring his leg. Williams had some impressive performances against Michigan in the past and brought an element of toughness to the Rutgers backcourt.

The Scarlet Knights use much more rotation at the five where Eugene Omoruyi, Candido Sa, Mamadou Doucoure and Shaquille Doorson all see varying amounts of playing time.

All four players are tough physical rebounders, but they don’t do a lot offensively. Omoruyi plays the most minutes and is shooting 47% on twos. He does a good job of drawing fouls and is also an effective shot blocker. Sa and Doucoure are both shooting under 40% on 2-pointers, but Sa is the best shot blocker on the Rutgers roster. Doorson is the lone true big — at 7-feet, 275 pounds — and only big man to make better than 50% of his twos but he’s played limited minutes of late.

There aren’t many more straight forward games on the schedule than Rutgers at home. Michigan is playing its fourth game in eight days, but dropping this one at home would offset much of the progress that Michigan made with wins over Michigan State and Maryland.

That being said, this Rutgers team has a lot of fight and is good enough to muck up any game. The Scarlet Knights took Michigan State to overtime and have proven they can challenge any team. KenPom projects a 66-55 Michigan win, giving Rutgers only a 15% chance at the upset, but you can bet that this game won’t be fun or easy for the Wolverines.