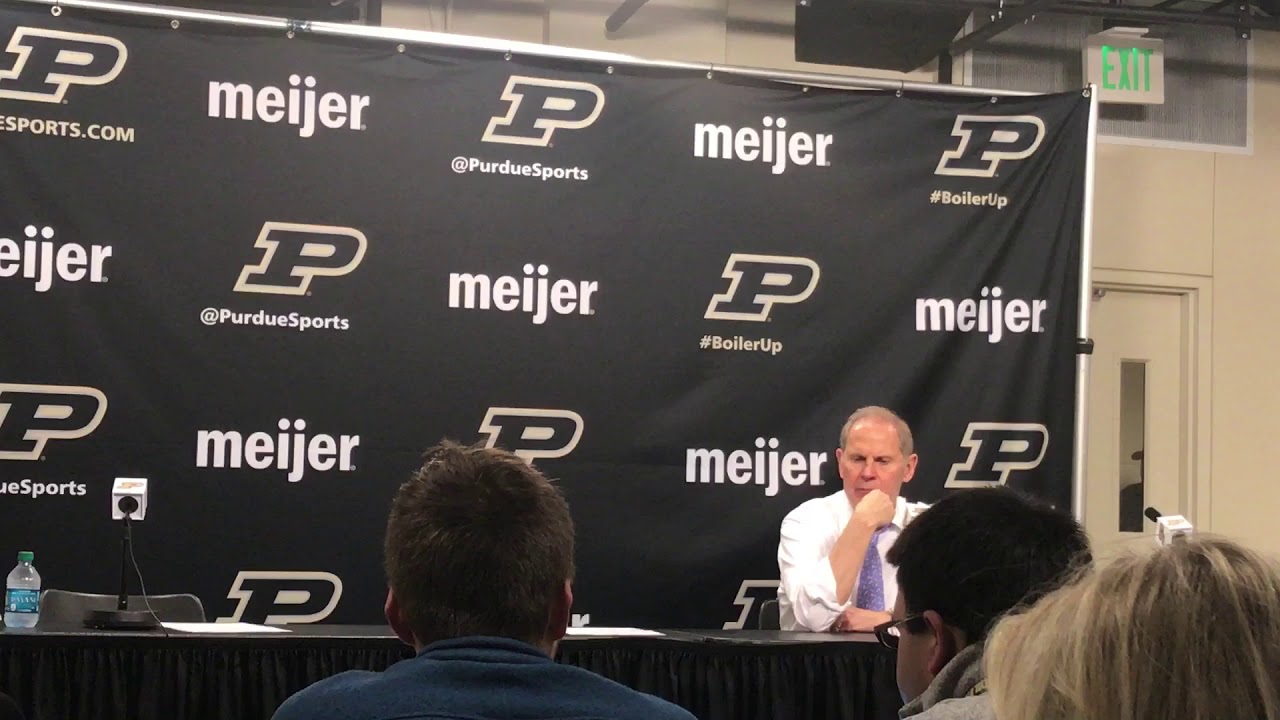 John Beilein, Muhammad-Ali Abdur-Rahkman and Moritz Wagner were on the podium after Michigan’s shootout loss in West Lafayette.

John Beilein, Muhammad-Ali Abdur-Rahkman and Moritz Wagner were on the podium after Michigan’s shootout loss in West Lafayette.

It’s a very difficult challenge for everybody. We actually tried to — we thought — we only give up like six 3s a game. And I think it’s one of the leaders in the country. And we were trying to shut that down and play one-on-one in the post. And Haas had 56 — he scored 40 points. He had 20 twos, it was okay with us, but we weren’t going to give him the 3. We couldn’t do that.

Q. There was that stretch right before Haas’s dunk kind of late. They missed six —
COACH BEILEIN: We had good stops. We had two turnovers, just like really bad turnovers during — we had a turnover taken out of bounds, turnover on moving screen and had two more.

It’s so hard to get a stop. And we missed two layups in that, too. We had a break-away layup, or an over-the-top layup and a layup at the basket and we missed them all. You’ve got to really finish those plays. And you can’t turn the ball over during that time. We could have got out of here with a W. Incredible, they didn’t miss a shot. We could have come out of here with a W.

Q. With that being said, it’s a loss; but what do you take away from a game like that?
COACH BEILEIN: It’s going to be a bad loss if we continue to make a couple of mistakes that we made today turning the ball over. And so there’s got to be a point here soon with our team and we’re playing really high quality teams like that that the mistakes we made are not ones that haven’t been made before.

Q. Did this one feel different though than the last one? The last one, you got behind early and came back, every time they had a punch you were right there, it was back and forth.
COACH BEILEIN: It’s a loss on the road in a great environment, and to a great coaching staff, coach and team. I mean, this team is like — I don’t think I’m crazy. You guys have seen teams that come in the Big Ten, who has five guys that shoot on the run? They don’t even have to get themselves open, shoot on the run.

And then a guy, when you said what are the challenges guarding Haas. You guys go and try and guard him. He’s impossible. And it’s a bad matchup for us. You probably need a guy that — probably need a twin brother that could guard him in the post.

And you can’t guard him in the post — the only way your hope is if they don’t have good interior passing. And Vince Edwards and Mathias are tremendous interior passers.

So they just get it at the angles where Mo’s really handcuffed. If you got 40, scored 20 baskets, we were all right with it. We were not going to let either Edwards get shots, and they still got them.

Q. Offensively, all the talk about what they do defensively, switch screens, all that. You guys got yours. Were you happy with —
COACH BEILEIN: Yeah, we just changed what we did. We didn’t know if they were going to ice us or down us or switch.

We just thought about something: Let’s just play this way in this one game and see what it does, and they’ll give you enough pressure so that you can’t run a lot of things sometimes.

And so we just said let’s do this and we worked the last two days on it. And our kids really responded well. Score that amount of points against them is a good sign, right?

And to have Muhammad-Ali play that way, it’s the expectation we have of seniors. And that’s the trend I hope we’re going to see the rest of this season. A little about the time that Derrick Walton took off was about this time last year.

Q. You talked on that note about switching Mathias yesterday and the guards sort of needing to score on the bigs more so than change any schematics. What did you think of Muhammad and Zavier’s performance in that regard?
COACH BEILEIN: They really did a good job at getting to the rim on a couple of occasions. I’d like to have a couple more finishes. They found John a couple times. No, they did a great job. They did a great job. The guard play was not good in the first ten minutes with those two, and I wasn’t happy with it. In the last 30 minutes it was very, very good.

Q. More of a big picture question about Purdue. A lot of people nationally come into this year, look to Purdue losing Caleb Swaningan and they thought they might have a different year, a down year. What do you think about the way they’ve played, and has it surprised you at all that they are nationally ranked as highly as they are at this point?
COACH BEILEIN: No, and Caleb Swaningan is a really good player. But in the college ranks, in the way that is played, the 4-man, if he’s playing the 4-man, he’s usually a guy that’s a driver or whatever, there’s challenges there that now with Edwards, this is the way we’ve played for years with a combo, he’s like a point forward, Edwards is. And while they had a tremendous year with Swaningan. This team for us is more difficult to attack and it’s more difficult to — it’s more difficult to guard.

Swaningan is — for other teams, probably they were glad Swaningan was gone. But it’s a matter of matchups sometimes. But these teams, when you have those four guys on the perimeter with that guy, once again everybody needs breaks to keep winning, win at the highest level and take it all the way. This team, if they get breaks, is really a fantastic college basketball team.

Q. John, as good as Purdue is, we talked all season about how it was a younger team coming into its own, now it’s almost February. Was tonight kind of the learning point of you’ve got to do certain things if you want to go where maybe you guys can’t go?
COACH BEILEIN: We have a long way to go in this season with eight games left. I think four home, four away. We have to — we’re going to have to win a lot more games and get better. And the only way we can do that if we continue to practice and continue to self-correct some of the habits that we have. And the coaches have to continue to look at the game and try to grow as well. And of course that’s me included.

So we continue to find ways to get better. But we played some really good teams, and this team twice, tough, and it means you can play with a lot of people. But just playing with them wasn’t why we’re here. To win was why we’re here.

But there was a couple of closeouts, the one at the end had a shot clock time. You have to be making — I think it was Mathias or Cline, you’ve got to be making him dribble the ball. But we didn’t do that on a couple of occasions. We didn’t make the guys dribble.

But hopefully next time — we were better than we were the first time. They had really open 3s at Michigan. Today, they weren’t as open but they still made it. That’s why they’re so good.

Q. Mo, you’ve gone up against Hass before tonight, a lot of one-on-one. Can you talk about that matchup, time in and time out what is the challenge there?
MORITZ WAGNER: Well, he’s a very good player. Yeah, he’s very big and physical, but he also has a lot of moves down there and you just gotta try to limit easy opportunities for him. And, yeah, I mean he scored a bunch at the end, but I actually thought we did an okay job. And I gotta be better in crunch time.

Q. For both you guys, did it feel like this game is something where first team that blinked was going to lose grounds because everybody was hitting shots? What was it like when everything was going back and forth and the ball just kept going in?
MUHAMMAD-ALI ABDUR-RAHKMAN: We knew it was going to be tough. They’re a great team and they’re playing at home. Anytime you play on the road in the Big Ten it’s going to be tough. But shots were going in and we knew we had to weather the storm as much as possible and try to bounce back and we didn’t do that.

MORITZ WAGNER: I think you can’t win a game without defense, and they scored 92 points on us today. So regardless how good we play defensively, how many shots we made we’ve got to be better defensively.

Q. For both players, just what did you learn from playing Purdue in these two games? What do you have to do defensively maybe to slow them down?
MUHAMMAD-ALI ABDUR-RAHKMAN: They provide a difficult matchup with size inside and shooters everywhere. Not many teams are like them. It’s different, but you learn how much your team fights and how good you are. And we kept fighting to the end but it just wasn’t enough.

MORITZ WAGNER: I think especially on the road you can’t give them transition opportunities like we did. So they always say offense is our defense, and if you turn it over as much as we did in crucial situations today, you give them easy transition baskets.

Q. Muhammad, what was working well for you offensively? Seemed like you couldn’t miss for a while there. And also, do you feel your team is progressing when these games are going back and forth, you kept your feet under you a little bit more than maybe at North Carolina?
MUHAMMAD-ALI ABDUR-RAHKMAN: I just got a couple of easy shots, a layup and wide-open three, got going early and just played confident. But I think we’re starting to get better, a little bit better. When teams go up on us on the road. We just fight back and try to get back into the game, much better than we did in the beginning of the season.